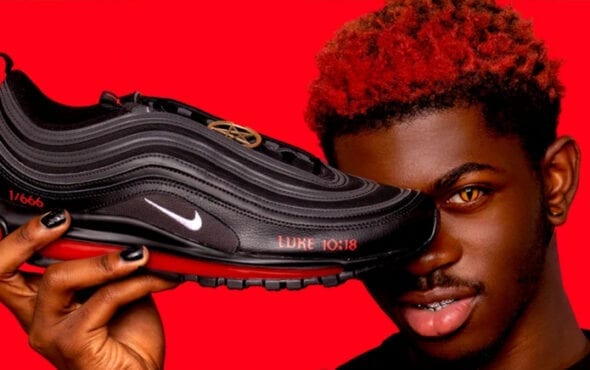 According to a new report, the ‘Satan Shoes’ have officially been recalled due to the now-settled lawsuit between Nike and MSCHF.

On 29 March, Nike sued MSCHF for trademark infringement for the ‘Satan Shoes’ and the company’s ‘Jesus’ shoes that were released back in 2019.

Under the terms outlined in the settlement, MSCHF will now have to issue a voluntary recall of the shoes.

666 pairs of modified Nike Air Max 97s were sold through the Brooklyn-based company.

MSCHF will also offer full refunds to customers who have bought the limited edition shoe.

A spokesperson from Nike released a statement regarding the ruling, stating: “The parties are pleased to put this dispute behind them.”

David Bernstein, a representative for MSCHF, also opened up about the settlement and revealed that the collective was “pleased to have resolved the lawsuit.”

Other details surrounding the settlement have not been released to the public.

The ‘Satan Shoes’ first made headlines after the 21-year-old artist announced the MSCHF collaboration alongside his hit single MONTERO (Call Me By Your Name).

Upon its announcement, LNX and the streetwear company faced immediate backlash for the shoe design and the supposed drop of human blood within the sole.

After receiving backlash, LNX swiftly took to his YouTube channel to offer an apology and hilarity ensued.

“Okay guys, I see everybody has been talking about this shoe,” he began.

Before he could continue his “apology”, the video transitioned to the lap dance scene from his epic video for MONTERO (Call Me By Your Name).

Related: How Lil Nas X became a revolutionary queer artist for a generation