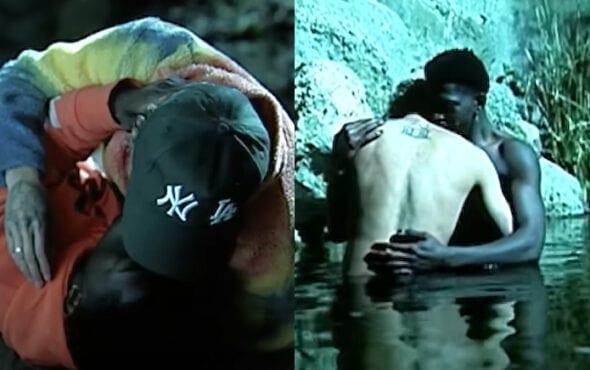 The video for Count On Me follows the musicians as they embark on a lovers vacation, where they enjoy a passionate afternoon in the woods before transforming into hallucinatory versions of themselves.

Directed by Kevin Abstract and Dan Streit, the visual is the second from the band’s critically-acclaimed sixth studio album Roadrunner: New Light, New Machine, after the Danny Brown-assisted Buzzcut.

Abstract, one of the group’s founding members, recently confirmed that Roadrunner is the first of two albums to be released this year. That’s the good news, the bad news is that these will be Brockhampton’s final releases.

Social media users were sceptical over the announcement due to similar comments made by Abstract in 2017, where he promoted their third release, Saturation III, as “the last studio album by Brockhampton.”

The queer storyline in the video for Count On Me follows in the footsteps of Lil Nas X’s biblical and ancient Greek-inspired video for Montero (Call Me By Your Name), in which the star pole dances his way into hell.

After giving Satan a raunchy lap dance in thigh-high boots and Calvin Klein underwear, Lil Nas X snaps his neck and crowns himself as the new ruler of Hell.

The music video received rave reviews from the LGBTQ+ community and liberal media for unabashedly celebrating queer sexuality in a way that hasn’t been seen from a mainstream artist such as Lil Nas X.

Montero (Call Me By Your Name) subsequently debuted at number one on the Billboard Hot 100, becoming the rapper’s second chart-topper after Old Town Road, which spent a historic 19 weeks in the pole position.

The hip-hop and electropop anthem also topped the charts in the UK, Ireland, Canada and France, and is still sitting comfortably in the number one spot on both Spotify and Apple Music. A song about gay sex did that.

We recently unpacked how Lil Nas X became a revolutionary queer icon for our generation – you can read that in full here.