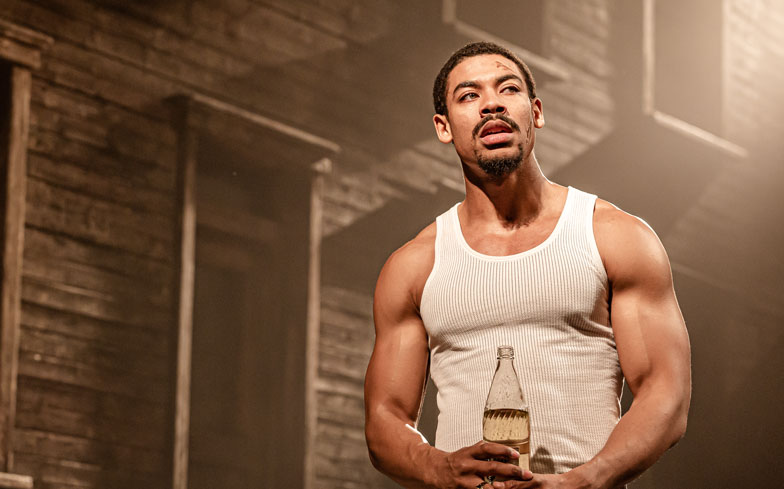 King Hedley II is the ninth show in August Wilson’s 10-part series of plays The American Century Cycle. With one play set per decade chronicling the lives of African-Americans during the 20th century, this one is set against the backdrop of Reagan’s 1980s America. It follows the tale of the titular King, an ex-con seeking to rebuild his life and start a family after being released from prison. Events play out in the Hill District of Pennsylvania, where Wilson himself grew up; a part of the country which certainly doesn’t seem to be reaping the benefits of trickle down economics.

It’s a challenging and powerful piece of theatre, and one that seems like a very timely revival. Many of the themes explored feel painfully relevant to the political and social climate in the USA today. It’s a lengthy text, weighing in at three and a half hours, with an awful lot going on – occasionally it can feel overwhelming. But although at times it lacks momentum, this is absolutely a show worth persevering with, not least because of the sterling performances.

Lenny Henry may be the star attraction here – and he’s in fine form as the smooth-talking trickster Elmo – but we were most impressed with Aaron Pierre in the title role. He’s an exciting and dynamic young presence who brings a tangible sense of danger on to the stage, while still managing to capture his character’s more vulnerable side. Martina Laird is graceful as King’s mother Ruby and Cherrelle Skeete is superb as King’s wife Tonya, too.

While the staging may not change throughout, Peter McKintosh’s set design is worth a mention as it looks so authentic. The entire play takes place in the family’s back yard, but being able to see into the neighbour’s patch and in through the windows gives a real sense of place. It’s all perfectly lit, too, thanks to Howard Harrison’s spot-on lighting design.

We were thoroughly impressed with King Hedley II. It may not be without its flaws – at times it’s a little too verbose and static – but it tells a powerful, moving and relevant story, and the sheer quality of the performances justifies the cost of a ticket alone. Well worth a visit.