Kim Petras interview: “I’ve been taught by pop stars for my whole life” 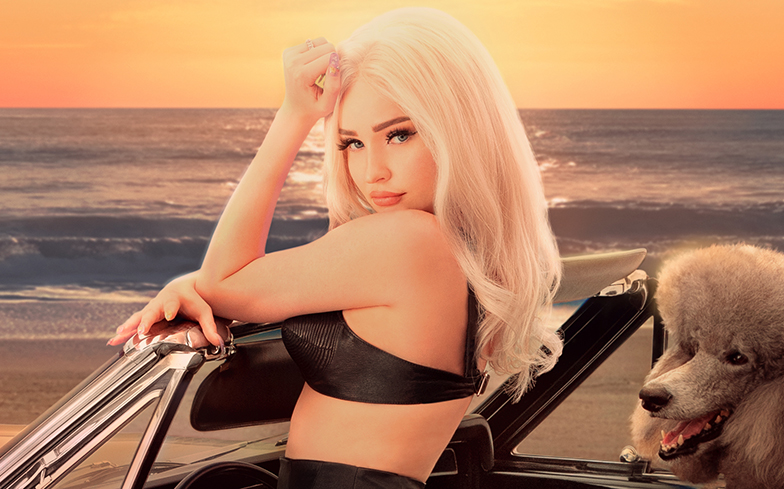 Kim Petras is ready to make the concept album she’s always dreamed of.

The singer-songwriter is one of the hardest working people in the game, having released a grand total of 48 songs (all of them incredible), collaborated with tastemaker Charli XCX and pop heartthrob MAX, and toured extensively over the last three years.

But now, influenced in part by the ‘stay at home’ policy imposed by the coronavirus lockdown, she’s finally taking the time to slow down and create her official debut album – Clarity didn’t count – and she’s got some ambitious plans for it.

“It’s been a real build to this point, I’ve been writing a lot, and my number one priority right now is to make a concept record,” she tells us, explaining that glittery new single Malibu is “a great puzzle piece” for the theme and sound she’s leaning towards.

We caught up with Kim over a Zoom call to find out how work on her debut album is going, how studying her favourite pop stars has led her to this moment, and when we’re finally going to get that Paris Hilton collaboration.

Hi Kim, how are you finding social distancing?
It’s hard! I wanna go and do shit. I mean, I’m lucky I have a home setup so I can make music, but I find myself being glued to my couch a lot just watching everything I can. I’ve been trying to stay inspired somehow which is really hard right now for everybody. I don’t know when I’m going to be able to tour again and do what I do best again, so yeah, it’s confusing, but I’m just making music regardless and staying positive.

I’ve probably listened to Malibu a hundred times already, it’s such a great summery song. How did it come about?
So the song is actually three years old, and it just kept on coming back. It was never perfect, it was never right, and we spent all this time making different versions of it – I think this is like version 10 – and now it feels right. I don’t know what it was, but it never felt like the right moment to put it out. Lyrically, it was really inspired by my idea of Malibu vs. the reality of Malibu. When I was a kid and I’d see it on TV I had this crazy idea of it, but when I was there I was like… ‘This is actually quite boring and not at all as magical as I imagined it would be’. So I wrote a song about the fantasy of it all and combined that with the feeling of falling in love. For me, it’s a return to pure pop in a lot of ways, which is why I make music. Clarity was about heartbreak and bitter feelings, it did have it’s fun moments but it was definitely not love songs – except for maybe Do Me – but Malibu feels like a return to pop for me. It’s one of the songs I’m most excited to release, it’s up there with Heart To Break and the songs I consider to be my best. I’m stoked, especially because I’m dropping it during this time, escapist pop has always been why I make music, so I think this is me getting back to the reason I make music, just the purest form of me. That’s my favourite kind of song – a fun, super loud pop song.

I was going to ask you what your favourite things about Malibu are but it doesn’t sound like you don’t have any…
Yeah, I mean, Malibu is nice! But I’m never there, I live in LA and it’s like two hours away, and it’s just a bunch of rich people, it’s not as exciting as Baywatch and all the movies made it look.

I think releasing a song like this is amazing because it is so uplifting and upbeat. Are you hoping it will bring some joy to your fans?
Yeah, that’s all I’m trying to do, especially right now, like I just did a cover of [Paris Hilton’s] Stars Are Blind because I’m trying to make people happy. That’s what I’ve always been trying to do. I started writing music because it made me happy, I could put my headphones on and listen to Love. Angel. Music. Baby. by Gwen Stefani and escape my real life. I think pop music especially has that power to it and that’s why I’m so obsessed with it. I’m just happy I’ve got this song at this time to drop.

When is this collaboration with Paris Hilton coming, then?
I’m still working on it, I haven’t finished anything. I know, it’s been fucking forever! I feel so mad at myself because I have to get this done, and she’s down and I love her and… it’s definitely still happening. It’s on.

You’re currently recording your official debut album – how is that going?
Well, it’s crazy, because I’m not with a major label, I’m an independent artist and I think a crucial part of why I am where I am is because I allowed myself to drop 48 songs so far, and I think as a new artist I needed to get to this point in order to release my first real album. I don’t think I’d have enough momentum behind me if not. It’s been a real build to this point, I’ve been writing a lot, and my number one priority right now is to make a concept record. I feel like Clarity was the perfect embodiment of feeling scattered and heartbroken and confused, and that’s why it has million different sounds and directions – Icy is super 80s, then it has some trappy songs, and some slow ballads, and some slutty-ass hoe anthems on there – but now I want to make something that puts you into one specific mood, and I think Malibu is a great puzzle piece for that. In the beginning I was kind of mad at quarantine for happening because I was about to do Coachella, which was one of my most looked-forward to moments, we had the stage ready and the outfits ready.

Oh my god, that’s so sad.
It was so fucking sad, because I was so excited and it was going to be such a big moment for me. It felt like I had arrived. And then I was going to open for Camila [Cabello] on tour this summer, and now that’s not happening. So in the beginning I was depressed, and then I realised, ‘Well now you have the break you’ve always wanted to make a concept album’. It’s hard when you’re travelling, because it’s easier to just take songs as they come and focus on singles instead of creating a whole cohesive project. So now I’m wrapping my head around a concept and how to make it happen. I feel like I’ve learned a lot from the 48 songs I’ve dropped so far!

The idea of doing a concept album is really exciting because most of the great pop albums we think back on, for example Madonna’s Confessions On A Dance Floor or Lady Gaga’s The Fame Monster, they have a theme and a consistency to them and it takes the listener on a journey. Are there any albums you look at as a blueprint for what you want to do?
I’ve been taught by pop stars for my whole life, I’ve always been studying them. I can’t deny that Madonna is my biggest influence ever, I think she’s one of the greatest artists of all time, and Confessions in particular is an incredible album I grew up on and would not stop listening to. I was always obsessed with Madonna because my mom loves her. Similarly, when I listen to Love. Angel. Music. Baby. it’s just one of the greats, and the same with Gaga’s The Fame Monster, that came out when I was like 14 years old and her singing about cigarettes and drugs and lipsticks, it was everything I cared about at that time and I stanned so hard. I felt the same freeing feeling from pop from her that I hadn’t felt with a while. I’ve studied every pop star there is and how they got there and who they made their greatest records with. I’m always inspired and influenced. But a hard thing sometimes is to detach yourself. What I’m trying to do right now is get to the bottom of who I am, so I’m trying to be as uninspired and right now I’m not listening to anything, I’m just trying to make my own thing and get my own essence down. I think that’s the only way I’m going to be proud of myself and be able to make the record I have to make, and be able to dig deep in myself to come up with those concepts. If you just look at what other people are doing, you’re not going to make anything new. You can be as influenced as much as you want, but you have to dig into yourself and figure out what you need to talk about, and in a way nobody else can help you with that. It’s a scary feeling, but mostly exciting.

BBC Radio 1 playlisted Reminds Me recently which is great. How does it feel to get that major mainstream recognition? Are you someone who strives for that, or do you not care so much?
No, it’s tremendously important to me. I’m so thankful. I’m one of the few people who has come this far independently without a major label behind them, so I’m extremely proud and it’s been years of touring and building a real fanbase and putting out music and writing songs. It’s been a long-ass journey to get to this point, and I feel very proud of myself that I am one of the few who’s independently doing this. I have creative control over everything, I make every decision, I have my own label Bunhead Records, I’ve always looked up to people like Robyn who have their own label, and Charli has her own imprint label. It just makes me feel really happy that it’s happening. I’m so grateful for the support I get, because I couldn’t do this without it. I still can’t believe how far this project has come sometimes.

How long until you get a Grammy?
I don’t fucking know [Laughs] It often feels like the Grammys don’t really reward pop, I’mma be real, but at the same time I do not care. I feel like awards shows scare me, it’s not my fans, it’s not people who love you. Awards shows scare me so much and they’re not even on the top 10 list of why I do this. Like honestly, being played on the radio and doing these interviews, that’s 100 times more important to me. But hey, also winning a Grammy would be sick! But it’s not something I think I’m ever gonna get, and I’m also cool with that.