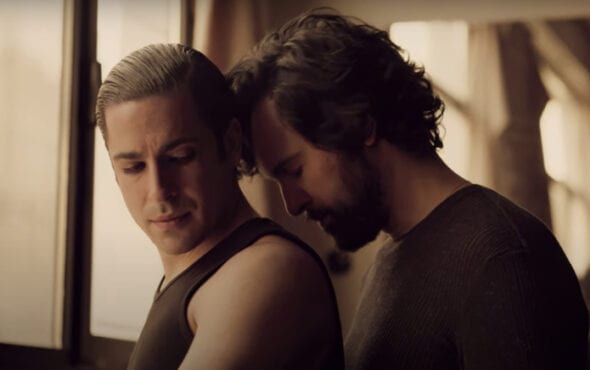 Juan Pablo Di Pace has released a song in his native Spanish.

According to the entertainer, best known for his role as Fernando Hernandez-Guerrero on Fuller House, Te Sentí pays homage to his Argentinian heritage and LGBTQ+ identity.

“It needed to have music that spoke to an international audience. Te Sentí is a love letter to my Spanish roots and the flamenco sounds that get under your skin pretty deep,” said Di Pace.

“It’s important for me to showcase a strong musical style and stories that are honest and truthful to whatever is going on in my life at the time.

“With Te Sentí, I was inspired by the feeling of losing someone, and that immobilizing pain you feel when you know it just cannot be.”

The sensual music video, co-directed by Di Pace and Manolo Pavón, depicts an inclusive love story as Di Pace cosies up to a male dancer.

“I consider myself a storyteller first, in fact, whether I am directing, singing or acting, it is always about the story first,” he continued. “And this video is definitely my ode to those who simply live in the grey areas in matters of the heart.”

Written with Latin Grammy winner Paulina Aguirre, the track will be included on his brand new EP, Vascular, which is due for release later this year.

Di Pace publicly came out as gay in 2019. During a TedX event, he opened up about his sexuality and the anti-LGBTQ+ slurs he faced as a child in Buenos Aires.

“Acceptance was my fuel, and when that is the case, like an addict, you do whatever it takes to get a fix. I figured if I changed my fucking self, I could be in,” he said, before admitting he found acceptance in himself when he moved to a different country, and later, with his role as Jesus Christ in A.D. The Bible Continues.

“Of all the people in the world that could play this part, they gave it to me. So there I am, hanging on the cross in Morocco and I look up at the sky, and I think, ‘You could strike me down with lightning. Are you sure you want me to play your son?’”

Di Pace said he felt an “overwhelming feeling of love and acceptance and freedom” that he couldn’t put into words, potentially from a higher power, adding: “Words are like universes and we are musicians who can create universes with them.”

The star is also known for his role as Heath in the LGBTQ+ Christmas film Dashing in December, which was nominated for the 2021 GLAAD Media Award for Outstanding TV Movie, and as Petros in Mamma Mia.

Te Sentí is now available on iTunes and streaming services – watch the stunning music video here or below.