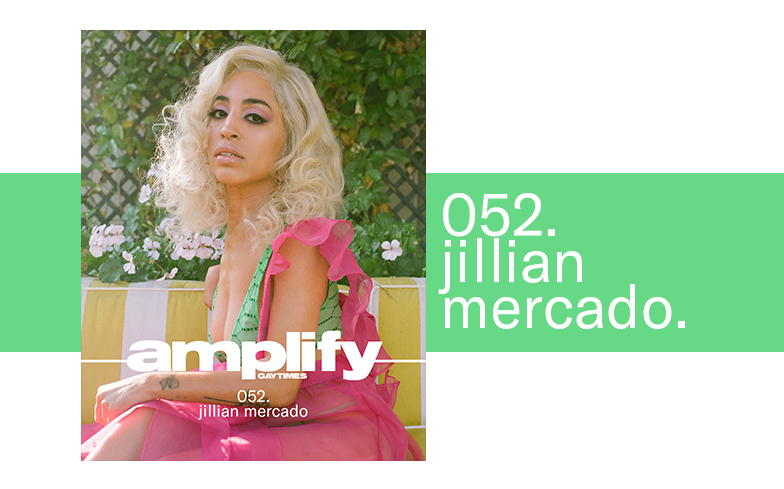 “My whole career path is essentially about representing us in the correct way, in the way that we see ourselves, whether it’s any form of media, TV, magazines, editorial, movies, I’m in,” Jillian Mercado tells us minutes before her photoshoot, and just a couple of hours after it was announced that the sequel series to groundbreaking queer drama The L Word, Generation Q, has just been renewed for a second season.

The actress and model, who was one of the first with a physical disability in the fashion industry, recently joined the cast as Maribel, an immigration attorney and the little sister of Sophie (Rosanny Zayas). “I personally haven’t seen anyone with such a strong personality who is queer, Latina and just so happens to have a physical disability,” she says of her character.

“I want to live in a world where people who have disabilities feel like it’s okay to do the career that they want to do, and not have to think about whether society doesn’t want them to be a lawyer or doctor or astronaut just because they have a disability.”

To commemorate Jillian’s debut on The L Word: Generation Q, we sat down with the trailblazing performer to discuss her transition from model to actress, the lack of television and film characters with disabilities and the importance of people from marginalised communities telling their own stories.

How does it feel to be part of such an incredible franchise like The L Word?
I mean! It was such a needed show 10 years ago because nobody was doing it, and representation is so important, especially for us to talk about it in our own stories with people who are actually queer. During that time, we were going through a lot of political tensions, and it was so important to be able to remove ourselves from real life and watch television with our family and friends; or in my case alone because I was so scared of watching it and having my parents finding out. Being part of that revolutionary moment in time is a blessing and I am so honoured to be a little flicker in the whole phenomenon that The L Word is.

Your character Maribel is a queer Latina with a disability – how important is it to see characters like her on screen?
It’s so important. Growing up, as a woman of colour who’s Latina, it was a very stereotypical kind of character portrayed on television. Our family dynamic when I would see it on screen was such an exaggeration of what my family represents and how it looks, and it’s making a mockery of it. That’s how I saw it growing up. So just having my character on television now, being an awesome immigration attorney and having that be represented by someone who is queer, and has a real-life experience is revolutionary. And I don’t think I’ve seen anyone with those specific identities put together. I hope I can be quoted wrong on that, but I personally haven’t seen anyone with such a strong personality who is queer, Latina and just so happens to have a physical disability. It’s not something that I’m happy about, and I don’t think anyone should be. There are tonnes of powerful women on-screen, but you don’t really see representation as far as disability goes in the media. We’re actually only 3%, but in that 3%, we’re less than 1% of the people who actually have disabilities playing somebody who has a disability. It’s usually someone who’s able-bodied playing someone with a disability, and they’re never portrayed in a way that’s empowering, or for that matter – and it sounds weird to say this out loud – normal. My character is an immigration attorney who just happens to have a disability, my character isn’t centred around my disability, and a lot of stories in the past have always had that as the main focus and spotlight.

The show has a really passionate fanbase – how has the reaction been to Maribel so far?
It’s exciting! The feedback has been incredibly amazing, I’ve had people who are like, ‘Finally, we can see ourselves represented in a way where it’s normal.’ It sounds weird to say ‘normal’, because it should be normal, but unfortunately, we’re never portrayed in that way. We’re always like a special phenomenon, like an alien for that matter. I want to live in a world where people who have disabilities feel like it’s okay to do the career that they want to do, and not have to think about whether society doesn’t want them to be a lawyer or doctor or astronaut just because they have a disability.

There were only 27 regular LGBTQ characters on television last year who have disabilities, and that was the highest percentage GLAAD ever discovered. What do you think needs to be done to improve that percentage?
That’s a scary statistic. I think that people in higher powers, in higher jobs, need to realise how important it is to have a diverse cast, particularly minority groups being represented in their way, in their stories. No one can tell our stories without us being involved as they’ll never get it right. There’ll be opportunities with hiring people behind the scenes as well. I always say that if you want to get the disabled community and the queer community or any community that’s been unrepresented right, you need to hire us in the writer’s room and in production. These things will change if this happens and will also prevent mistakes from happening and misrepresentation from happening. Just hire us!

Has this been the case for The L Word?
Absolutely. My family was written by a queer Latin woman of colour, and she specifically was telling our showrunner, Marja, that this show cannot begin unless we authentically find someone who is from Dominica and also queer. It was the number one priority for her to make sure that happens. Before Marja was director, she was a tutor, and someone she was tutoring, her sister had a disability. She was telling me that their dynamic was unbelievable and it left such an impression on her that when she had the opportunity to contribute to the show, and write alongside the writers, she specifically asked to have someone in the show who had a disability. It was my calling to watch this show, and in my family that was a bad thing to do, which made me even more intrigued to watch it. It completely altered my thought on what I was feeling inside. Marja was like, ‘I need to find someone with a disability,’ because they have not been portrayed in the way that she saw this girl in real-life, it didn’t match up. As soon as I heard they were looking for someone like me, I was like, ‘I’ll do it for free, I don’t care, I want to be on this show!’ And on the first day of set, I was talking to Marja and she gave me 100% freedom to call her out if there’s things she gets wrong or she’s ignorant of. Ignorance can be a good thing in terms of having the ability to learn from the person who’s calling you out and teaching you. She said, ‘Let me know if I get things wrong, or if you read the script and you think someone with a disability wouldn’t do or say this’ and I thought that was so beautiful. As far as our relationship, it was very clear to her that she’s not a person of colour who has a disability, so obviously she doesn’t know everything as she’s not living it first-hand.

Like the TV industry, the world of modelling is slowly becoming more inclusive – why do you think it’s taking so long?
It’s not like we’ve appeared out of nowhere. We’ve always existed, like any human person out there. I think it has a lot to do with social media, the internet definitely gave us a platform where we could talk to the world about our differences and finding a community out there that you probably wouldn’t if the internet didn’t exist. Feeling like an outsider was obliterated when the internet came out, because you’d talk about your stories and someone would be like, ‘Oh, I absolutely know what you mean, this is mine,’ and you’d be like, ‘Oh wait, that’s crazy that we both share the same storyline, I’m not alone.’ And then you can be alone together and then you meet more people who are the same, and it’s beautiful because that community grows and grows, and you get numbers like one in five people have disabilities, and you’re like, ‘Oh my god, that’s a lot of people.’ For me, the internet absolutely connected me to a world of people that I most likely didn’t know existed when I was younger. For me, I knew I was fabulous from a very young age. I was always number one in my classroom, and I decided to fix things for myself and post them on Tumblr, and people would go ballistic about them and it would boost my confidence. It’s just giving you the verification stamp that Instagram does, but in real life. And it helps, because having a disability is hard enough, and growing up looking at your body and realising who you are as a person is hard enough, but having things like Tumblr helps.

Do you think there is genuine change happening in the modelling industry below surface level?
I think that if it wasn’t for myself and people and outlets like British Vogue who are out there trying to make sure that it’s actual real change and not a trend, I could definitely see how we’d be worried. But honestly, as long as I’m alive, I’m going to fucking make sure that it’s not; that we are valid and that we deserve to be the new way of thinking as far as advertising and marketing goes. There is no going back, there is only moving forward. Let’s be creative about different ways, sure, but to be genuine about it is so important. Take for example the Oscars, people really understand what bullshit looks like, and if someone is not being genuine about it, if a brand or company are doing it just for show, we’re all going to know and we’re going to call it out. I am always the one who if I can give the opportunity to someone else, to work alongside me, or if I can’t do it and I know somebody else who will, I will be the one who says, ‘Don’t give up, I know about 20 people you can hire.’ It’s going to be slow, but it’s not going to be a trend or a fad.

You’ve been a groundbreaking figure in both modelling and television – what’s next for you?
Astronaut, what can we do? I’ve been putting myself in huge categories of change that needs so much work done. My whole career path is essentially about representing us in the correct way, in the way that we see ourselves, whether it’s any form of media, TV, magazines, editorial, movies, I’m in. If a move comes my way, let’s go. TV show? I’m doing it. And pushing this forward and making sure people know how important it is for not just our generation, but the one that’s coming next. I want to live in a world where there’s no question about someone having a disability being whatever they choose they want to be, with no hesitation of, ‘Can you do it?’ but more, ‘How can we help you so you can do it?’ We’re some of the most creative people on earth.

You can watch the first full season of The L Word: Generation Q on Showtime.