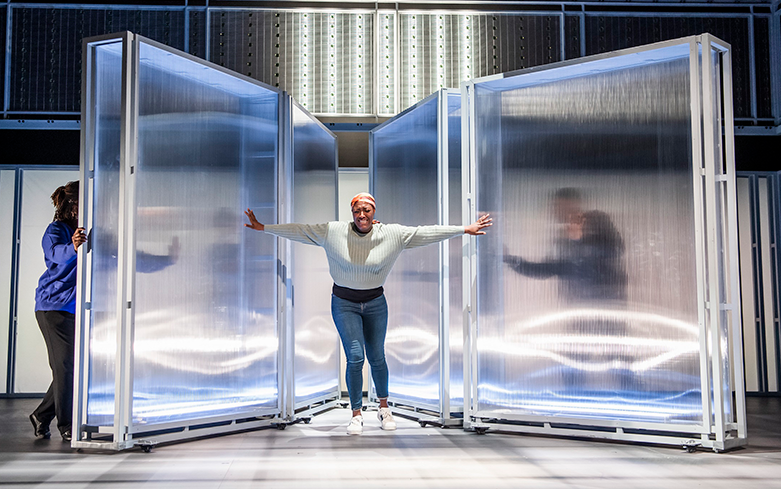 This new play focuses on three slightly-interconnected stories, each involving a pair of individuals. In one narrative we meet two estranged sisters who bicker by text and voicemail; another introduces a proud mother and her over-achieving son, who is a student at Cambridge University; and the third involves a taxi driver and his terminally-ill wife. It all unfolds on a sparse and clinical-looking set, mainly comprised of glass partitions which are wheeled around the stage.

It’s an intelligent observation of the very human need to connect. The play largely comprises a series of monologues to drive the stories forward, but these are interspersed with conversations. Each character is clearly battling their own demons and could do with someone to talk to. Over the course of a little more than two hours we gain a series of insights into key moments of their lives, and how the pairs of characters all fit into a bigger picture.

There’s a lot here to enjoy. Although we felt act one was slow and clunky in establishing some of the characters we got there in the end, and act two – which is shorter and pacier – was very impressive indeed. Two scenes stood out for us in particular: when the sisters decide to stop arguing by phone and actually meet, it’s an interesting scene to watch and resolves a punchline that’s been teased for almost the entire play; while another highlight involves a wonderfully dark and unexpected joke about death – in a hospice, of all places – which really took us by surprise. It’s a genuine laugh-out-loud moment.

It’s not a perfect show – for example, we weren’t in love with the staging. It works fine, but feels a bit sterile given the warmth and emotional authenticity of the stories being explored. It does have a pacing issue as well, in that all the best moments unfold during the final scenes of act two. Early scenes that are establishing the characters occasionally feel forced. But in spite of this we still had a good time with I Think We Are Alone – it’s pretty enjoyable throughout, with occasional flashes of brilliance towards the end.