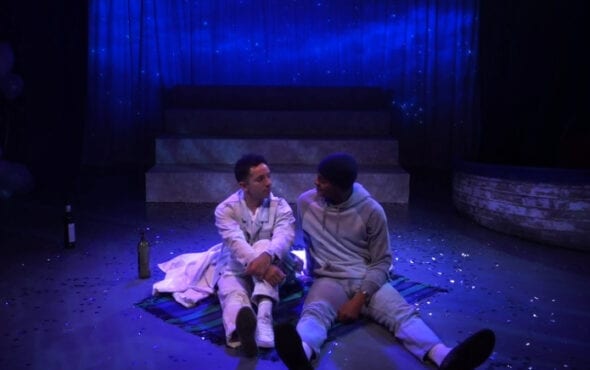 This new staging of Jonathan Harvey’s 1999 play, which streamed live from Manchester’s Hope Mill Theatre earlier this month, is now available on demand.

Hushabye Mountain tells the story of a world that is starting to learn to live with HIV, but doesn’t yet have an effective treatment. It focuses on Danny (Nathan McMullen), a young man who has recently died and is waiting to be let into heaven, and Connor (Layton Williams) who doesn’t really know how or when to move on from Danny and is tentatively exploring a new relationship. The cast is completed by Jodie Prenger who plays Danny’s mother; Matt Henry, as Connor’s brother; Amy Dunn as Danny’s best friend; and Harrison Scott-Smith as Connor’s new love interest.

We’ll be the first to admit that streaming productions rarely hit as hard as in-person performances – we lose the immediacy and the intimacy of being in a space, as well as the feeling of being part of a communal experience with the rest of the audience. So it’s a seriously impressive feat that Hushabye Mountain is able to provoke a genuine emotional response, in spite of these barriers. One scene, a flashback showing Danny and Connor discussing funeral arrangements, moved us to tears; while another, set in a hospital and featuring some gloriously inappropriate and deadpan one-liners, had us laughing out loud.

It’s a cleverly put-together piece of theatre. Director Nick Bagnall has clearly adapted to the format – there is some smart camera work which facilitates swift scene changes and draws our attention to specific characters or parts of the staging at the right moment. It often feels like it has more of a filmic quality and it’s all the better for it. Lighting and sound is used effectively throughout to create vivid scenes that extend beyond the confines of the venue.

The performances are all strong, too – there isn’t a weak link in the cast. We’re already big fans of Layton Williams and Matt Henry and they both shine here, but it’s Jodie Prenger who steals the show with an excellent turn as Danny’s mum. Here is a nuanced and layered character; we see her conflicted loyalties as her husband rejects their son for being gay; her attempts to make things work in her own way; and her gradual decline as the weight of these pressures impacts on her health. Hers is a character that we gradually learn more about and grow to understand her over the course of the play – it’s a subtly brilliant performance.

We really enjoyed our two hours with Hushabye Mountain. Jonathan Harvey’s script means that, even though we’re dealing with a heavy issue and plenty of heartbreak, there are still healthy doses of warmth and humour thrown in. There are some gorgeous set-pieces – especially some haunting moments towards the conclusion – which result in an achingly beautiful show. In the context of the current health crisis it seems an opportune moment to revisit this era – a very worthwhile and timely revival.