This is how art is helping change LGBTQ lives in Iraq 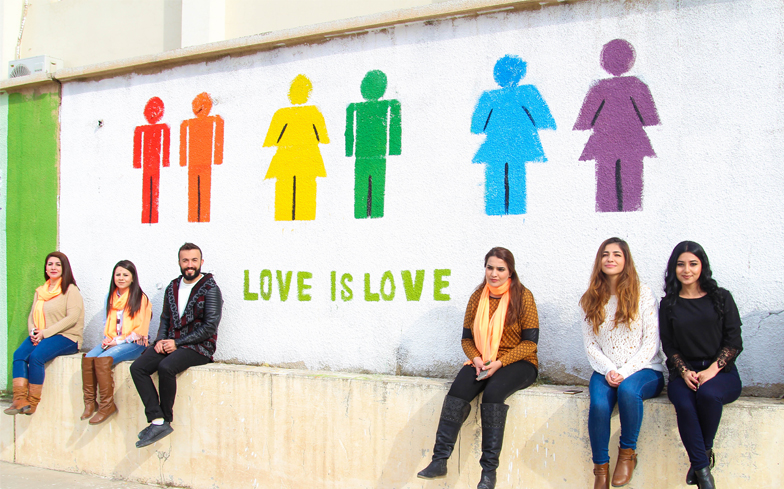 My name is Ahmed* and I’m 18-years-old. I’ve lived in Iraq my entire life.

For the first 14 years of my life, my family was everything to me. Although they’re very strict, I loved them very much.

But when I came out as a transgender man four years ago, my life changed for the worse.

There was hardly a day when I wasn’t verbally abused, beaten, or locked up by someone in my family after I came out. I started running away from home whenever I got the chance. Being just a kid without a stable income, I would always run out of money or safe places to stay, and have to come back home. One year was especially bad. My father wouldn’t let me leave the house for seven months straight. It completely broke me. I felt so desperate, hopeless, and alone.

The last time I ran away from home, my father said I could never come back. He made my siblings promise him that they would never contact me. He told my mother – who had been my last hope of getting any kind of support from my family – that he would divorce her if she tried to help me in any way. So I left my home – and my family – for good.

I found a motel in the city of Sulaimanyah that I could afford. I thought it was safe enough – I was close to the public bazaar. I started making friends, settling in, making a home from what little I had. But one day, I came home to find Asaysh, Kurdish security forces, waiting for me and my friend, who was gender non-conforming. Although we hadn’t committed any crimes, we were arrested immediately and banned from entering any hotels in the area ever again.

After being released by Asaysh, I was forced to live on the streets. It was utterly terrifying. But I got lucky. Someone I met on the streets told me about a group called Rasan.

They made history in Iraq in early 2017 by painting murals about LGBTQ equality on public walls around the city of Sulaimanyah. The murals were vandalised, but they kept repainting them to get their message out there. With these paintings, Rasan is sending a message to young LGBTQ people in Iraq that they aren’t alone. They are helping change hearts and minds.

As part of their activities, Rasan also works with young LGBTQ people in the region like myself who quite often have nowhere to go and no support. With their help, I found a much safer, permanent place to live. They made sure I had food and other basic needs. They’ve been helping me get my life together.

Rasan has permission from the Kurdish government in Iraq to paint another round of public murals in Sulaimanyah. They’ve lined up professional artists to paint the murals and have secured locations for the murals that are harder for vandals to reach – but they need funds to do it.

That’s why Rasan has teamed up with global LGBTQ rights group All Out to run a crowdfunder to make this groundbreaking project happen.

Want to help out? You can make a donation at https://go.allout.org/en/a/iraq-lgbt-murals/

*I’m not using my real name, for my own safety