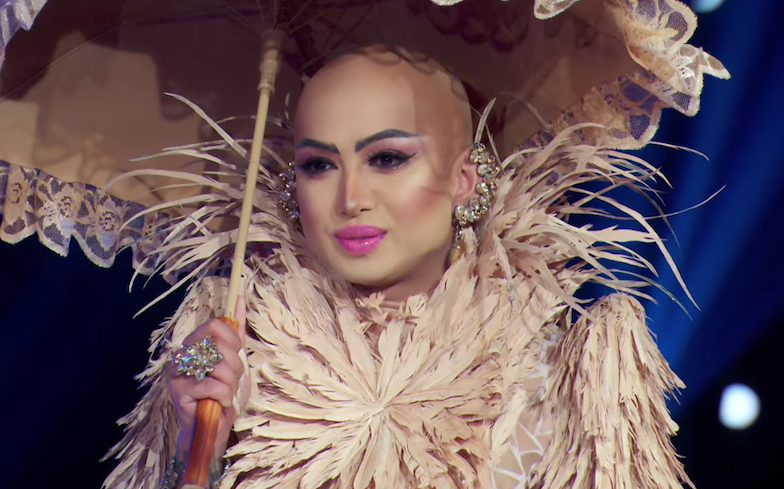 Ongina has spilled the T on her Drag Race All Stars 5 run.

The iconic entertainter made her long-awaited ruturn to the Emmy Award-winning franchise earlier this month, 11 years after making HERstory on season one as the first contestant to win two maxi-challenges.

Ongina also broke new ground for the series and won the hearts of viewers when she bravely came out as HIV positive.

Although she continued to prove her status as one of the most congenial Drag Race contestants, Ongina sadly became the second queen to sashay away from All Stars 5 after underperforming in the girl group challenge.

“I’ve had a few days to really reflect on being on All Stars and finally getting there and what I could show,” Ongina tells GAY TIMES. “Obviously it was a little different than what I imagined, but I’m really happy I was finally an All Star.

“Like I said, I’m a little disappointed for leaving so soon, but so happy you all got to see my culture, my glow-up, my sexy raspy singing voice… I’m happy I got to show you who I am as a person.”

When asked what else we could’ve expected from her this season, Ongina reveals: “To win the design challenge! We all know that I think I am an interior design expert. I would have been able to show you more amazing looks.

Of course, we had to ask Ongina who she had planned for Snatch Game. The staple maxi-challenge, which sees contestants impersonate celebrities for a parody of Match Game, didn’t debut on Drag Race until season two; meaning the star has never had the chance to showcase her celebrity impression and improv skills.

“I actually planned on a few,” she admits. “I came very very prepared… maybe too prepared, but I don’t know if they would have been good. In my fantasy, I would have killed Connie Chung or Marie Kondo.”

Ongina then addressed her relationship with fellow contestant Miz Cracker, who fans labelled the “villain” of Drag Race All Stars 5 after she played – in the words of Mariah – “mental warfare” with the beloved queen.

“My relationship with Miz Cracker is really good, we are moving forward. She reached out to me over the weekend after having understood where I was coming from and having read my open letter,” she explains.

“It was me who put caution tape around myself from her because I didn’t know where our relationship was or if it was genuine. But I realized to move forward we needed my lane open. We both listened, understand, and are excited to move forward.”

The star also stressed the importance of entertaintment such as RuPaul’s Drag Race during our current climate crisis, saying it’s imperative to “put smiles on people’s faces and make them feel happy even if it’s just one day a week.

“It’s especially important right now because our voices are being heard far and wide and we need to use that beyond drag. Drag has always been political, so I’m making a promise from here on out to really lend my voice to those who don’t have one.”

The first two episodes of Drag Race All Stars 5 are available to stream in the UK on Netflix.

On this week’s episode, the eight remaining queens will dive into the world of celebrity branding as they design their boutique hotel experiences, with special guest judges Nicole Byer and design guru Martyn Lawrence Bullard.