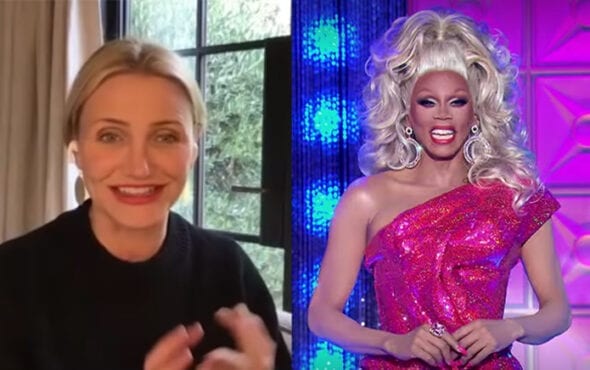 Cameron Diaz has become the latest celebrity to voice their love for RuPaul’s Drag Race.

During her appearance on Danny Pellegrino’s Everything Iconic series with her business partner Karen Power, the actress praised RuPaul for creating the Emmy Award-winning franchise and the ‘fearless’ contestants.

“As far as I’m concerned, Drag Race saved my life,” she admitted. “I found it at a time where I felt really overwhelmed with the world, and I just felt like, ‘What are people doing? How do we survive this?'”

Diaz discovered the series last year following the death of her friend’s father.

“I watched three episodes of season 11 on the plane, and for the first time in so long, I was laughing out loud,” she said. “My mind was blown. I went home and immediately started watching from season one.”

The star said she was inspired by the queens and their “fearlessness,” despite suffering from anti-LGBTQ+ abuse, being disowned by their families and ostracised from society.

“These women are their truest form,” she continued. “Watching a drag queen be a drag queen, they’re not making any apologies. They’re taking so much risk. Their art-form is what keeps them alive.

“They’re the most marginalised of all of our culture. They persevere. I’m just blown away at the art they create in an instant. RuPaul’s created this thing and been able to bring it to the world, without any apologies.

“It makes me feel like anything is possible. We’ll all be okay. We can adapt. We’ll persevere, as long as we stay true to ourselves.”

After Pellegrino mentioned he had Shangela on his show, Diaz added: “I love Shangela! I love We’re Here. And Bob. I love Bob! You know, Eureka. The three of them are so magic together.

“I’ve also watched the UK, I’ve watched Canada, I’m doing the Dutch Drag Race. Anything Drag Race. I’ve done all the All Stars. I put it on in my kitchen while I’m cooking dinner.”

Watch Cameron Diaz express her love for RuPaul’s Drag Race in the video below at the seven-minute mark.