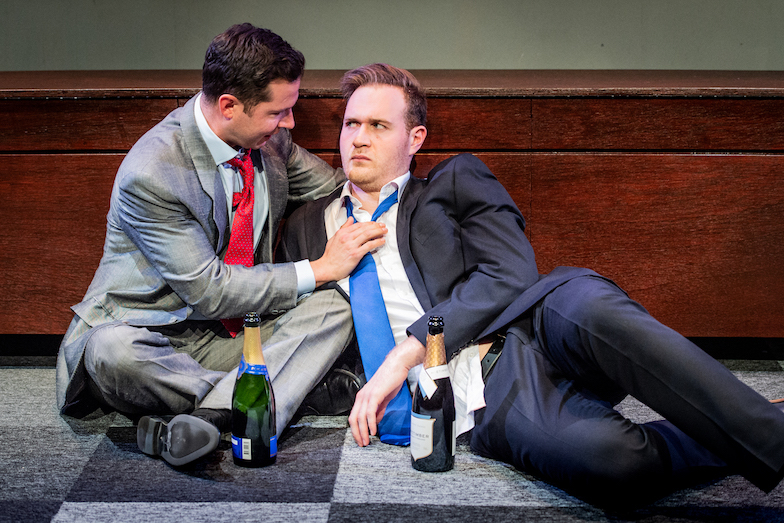 Ben Alderton’s new political satire, based on the events running up to the 2015 general election, has opened at Islington’s Park Theatre.

The timing of this production seems odd. The 2015 election doesn’t feel long enough ago to be of historical significance, yet in a post-Trump, post-Brexit world it’s not contemporary enough to be relevant. Having said that, it certainly had lots of interesting source material and the result was unexpected. In that respect it’s not a bad idea for a show, although it would have been a more powerful piece of theatre if it had been produced in the aftermath of the election.

A reasonable idea for a play doesn’t always translate into an enjoyable production; sadly, Hell Yes I’m Tough Enough is a rare misfire for the Park Theatre. We had so many issues with the show that it’s difficult to know where to start. Most obviously, it’s too long – the events are stretched thinly over two and a half hours, resulting in a bloated play which doesn’t say very much.

For a comedy it’s noticeably light on laughs. This is largely a result of one-dimensional characters – yes, we got that the politicians were not meant to be likeable, but that seemed to be an excuse to fill the text with juvenile, dated and offensive humour. Racist and sexist jokes were casually thrown about on a regular basis. If there was some intelligent, nuanced and witty humour to act as a counterfoil to these characters, or if the MPs were called out for their appalling behaviour, it might have been a little more excusable, but this never happened.

The only nod towards today’s politics was the introduction of an Obi-Wan Kenobi-style character called Corbz – who the characters referred to as Jez, as if a politically-engaged Islington audience wouldn’t have been smart enough to work out he was meant to be Jeremy Corbyn. He popped up occasionally, saying little, and towards the conclusion suddenly burst into dance. He encouraged the audience to clap along. No one did. It was an excruciating, cringeworthy moment in a play overflowing with them.

We’d love to be able to say that the acting was strong, but sadly that wasn’t the case. At best it’s competent, but the characters are so shallow that there’s really no room for any subtlety or development. It may have been press night nerves, but there were an awful lot of very noticeable slipped lines and pregnant pauses, which really didn’t help in the context of a show which was already over-long and not particularly slick.

It’s difficult to understand who this show is for, or why it’s being produced now. The paradigm shift in politics since the 2015 general election makes the events of this play feel redundant. By spelling out everything out so overtly – be that a lighthearted story such as the bacon sandwich or pig-gate, through to more serious matters like bombings in Syria or the migrant crisis – it seemed to assume no prior knowledge; yet it’s hard to imagine anyone buying a ticket for this show who wasn’t interested in the political landscape at the time.

Uninspired, under-rehearsed and unfunny, Hell Yes I’m Tough Enough is best avoided. To quote Ed Miliband – who, fittingly, pinched the term from The Thick of It – it’s an omnishambles.