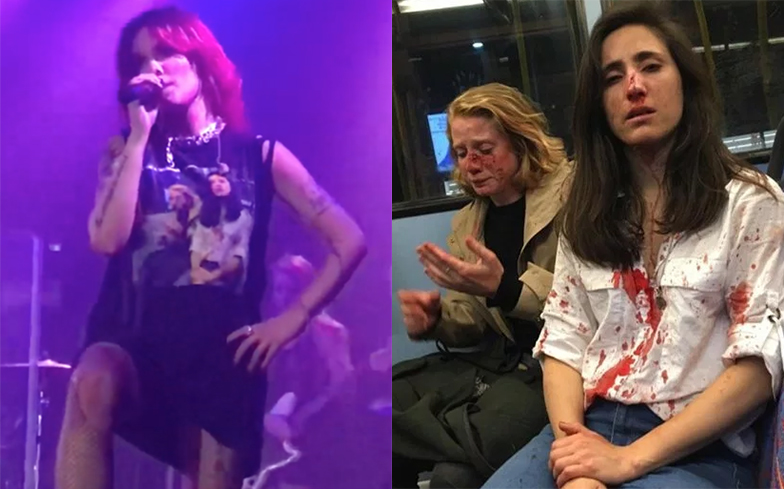 “When Pride is over, it’s not safe to be gay anymore.”

Halsey has paid tribute to the lesbian couple who were viciously attacked on a London bus.

Last week, Melania Geymonat, a 28-year-old Ryanair flight attendant from Uruguay, was en route to Camden town on a bus with a woman called Chris when they were approached by a group of four homophobic men.

After harassing them with anti-gay slurs, they demanded the couple kiss each other in front of them for their own entertainment. When Melania and Chris refused, the men assaulted and robbed them.

During her performance at the Electric Ballroom in Camden, North London, Halsey came out wearing a photo of the couple – which was taken shortly after the attack – on the front of her shirt. On the back it read ‘FUCK YOUR STRAIGHT PRIDE.’

a four minute heart wrenching speech about the attack in camden last week and why straight pride will never be a good idea. thank you halsey for being the inspiration and voice of our community, words fail to describe how much we love you @halsey 🏳️‍🌈 pic.twitter.com/kXBjFDB5PW

“Do you guys see the two young women on my shirt?” she asked the audience. “Do you know who they are? The two people on my shirt are a young couple called Melania and Chris.

“And a couple nights ago, right here, they were assaulted because they’re lesbians.”

Upon seeing the back of her shirt, the crowd chanted to the American singer-songwriter: “Fuck your Straight Pride.”

She passionately continued: “The sharp reality is, after the Pride parades are over and after the bars close their Pride nights, when the glitter is being swept out of the streets, a lot of people get on those trains and they get on those buses and try to wash the glitter off their bodies.

“They peel the stickers off their clothes, because when Pride is over, it’s not safe to be gay anymore, because they are worried that someone is going to viciously assault them or viciously attack them.”

Halsey then launched an attack on the right-wing bigots who called for a ‘Straight Pride’ parade.

“So, when people around the world ask them: “Why isn’t there a ‘Straight Pride’ parade?” The answer is, because if there was one, you wouldn’t have to get on the bus and be terrified of getting fucking beaten up or killed afterwards.

Halsey, who is openly bisexual, has continuously fought for LGBTQ representation throughout her career.

Earlier this year, she performed her Billboard Hot 100 number-one single, Without Me, on The Voice US and enlisted the help of dancer Jade Chynoweth to play her lover, and the two women delivered passionate choreography to accompany the song.

It was met with backlash from homophobic audiences, to which she hit back on Twitter: “I’m very proud of the emotional performance I did with Jade Chynoweth on The Voice tonight.

“And also very proud to have pissed off the homophobic viewers at home who missed the message. Thanks for watching.

“Representation matters. Thanks The Voice for giving a space for this vision to come to life. And thank you Jade Chynoweth for being an incredible human who used her body like the ultimate instrument for this collaboration.”