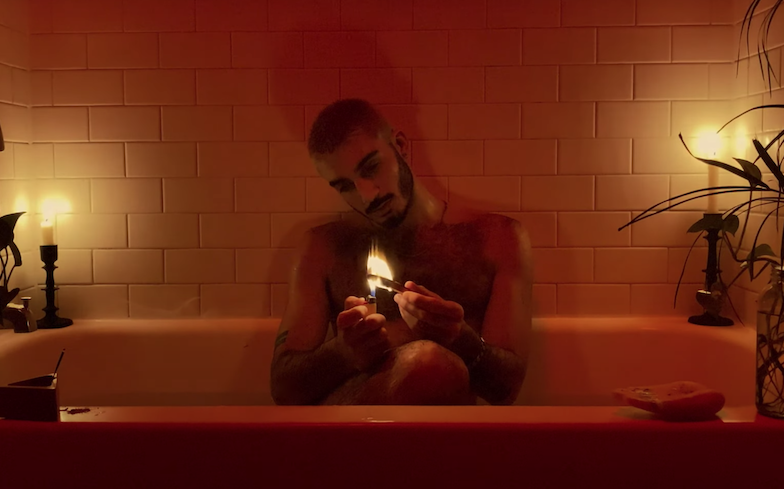 GESS has added ‘music video director’ to his ever-expanding repertoire.

The writer, producer and singer has released a self-made quarantine video for his dark, electronic R&B anthem Palo Santo, which he shot, directed and edited himself. It begs the question: is there anything GESS can’t do?

The sultry visual was filmed over ten nights in the rising star’s apartment on an iPhone – how Gaga of him! – and captures his “feelings of hopelessness, despair and loneliness” as he refuses to allow his inner demons take control.

“There were points during the filming process where my apartment was ripped apart, couch in the kitchen, coffee tables in the bathroom, my art was taken off all the walls so I had a clean backdrop,” GESS said in a statement.

“I had to stack tables and books and whatever I could find to make a fake tripod for my iPhone to sit on. There were so many videos I had to discard. So many times my phone fell off the stack of furniture and I thought it was shattered.”

GESS continued: “The process took forever but it was a lot of fun and I learned so much about myself in the process. Because I was creating completely alone I really let myself experiment and try things.

“I can honestly say I know myself better after all of this alone time in self isolation.”

Palo Santo is the first single taken from GESS’ self-isolation EP, Psyche, which consists of three incredible, genre-bending tracks and tackles his emotions in lockdown, from hopelessness, loneliness and queer desire.

GESS told Gay Times last month: “I wrote about 12 demos in two weeks. I truly felt like a crazy artist out of a movie, living in my chaos. I felt like the Mad Hatter or something, I don’t know, just very mad energy.

“I wanted to try and touch on ideas that weren’t so on the nose. I didn’t want to write a song called ‘Lockdown’ or something that’s so predictable. I wanted to touch upon ideas that everyone was experiencing in a more creative way.”

Palo Santo is now available on iTunes and streaming services – watch the captivating video below.