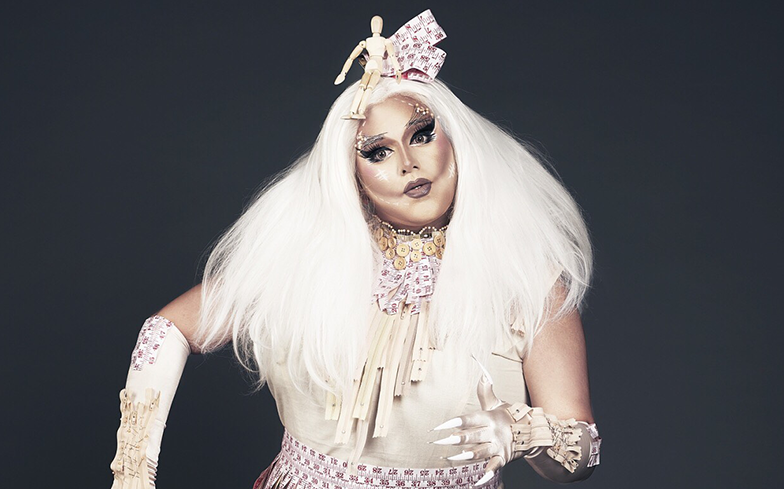 “There are so many extra layers that make it more difficult, like nuances we miss or cultural elements we just don’t understand.”

Californian-born drag performer Genie made history earlier this year when she became the first American queen to compete on the Thailand version of RuPaul’s Drag Race.

She also boasts the honour of being the first Hindu contestant to compete on any iteration of the acclaimed drag franchise, and its first queen of Indian descent. So yeah, it’s safe to say that her participation on the series was a landmark moment for drag queens of colour.

The self-described “creepy and cute” queen may have been eliminated in sixth place (her first time in the bottom, giving us Manila flashbacks!), but honey, she made her mothertucking mark on the series, winning two maxi-challenges and a runway challenge. She gave us life honey!

In celebration of her groundbreaking appearance on the series, we caught up with the performer to discuss the differences between Drag Race US and Drag Race Thailand, the difficulties of being an American queen on the show, and the possibility of seeing “bio queens” and drag kings on the show in the future.

How would you describe your drag style?
I always try and do something conceptual. Aesthetic wise, I go for a unique blend of creepy and cute. If I had to pick a character that personifies me, it would be Boo from Mario, the cute little ghost that giggles and smiles as it comes for you! Like it scares you, but you wanna cuddle it. I like how people have compared your Drag Race Thailand promo to Jinkx from Pokemon.
Yeah! I’m very proud of that. Any comparison like that, I’m happy with. It’s fun to see yourself as a cartoon! Other comparisons I would gladly accept: Jigglypuff, Clefairy, and Chancy.

Who are your biggest drag inspirations?
I’m mostly inspired by things that I found cute and adorable as a kid! Toys, games, characters, animals. Also, supernatural creatures. I’ll take them and turn them into a visual motif for a look. From the other side, like thinking about traditional fashion elements and styles, and then finding a way to turn them upside down. Like my nuclear hazmat ballgown. It’s a ballgown…that’s a hazmat suit? I’m disgustingly proud of that look. It’s fun, and to me that’s better than fashion.

And when did you start drag?
In my early years of drag, I was only doing it a couple of times a year, and I was moving around every other year for work. Los Angeles, New York City, Boston, Seattle. New York was where I started to experiment with my style and just go out in drag to be part of it all. In Seattle, despite not having done drag very often, I got booked for some of the biggest shows whenever the RuGirls came to town. But Hong Kong was really where I started to come into my own. Multiple shows each week, gigs at the best venues in the city, and new looks! That was when I started getting booked for travel gigs in Taipei, Singapore, and Mainland China.

And look at you now, you were on Drag Race Thailand! And you won the second and fifth episodes. How has the experience been?
It’s been a whirlwind! I hope I don’t sound crazy when I say this, but I always felt like I belonged on a bigger stage. So when the opportunity came up, I had to at least give it a shot. The experience has been totally life-changing. I always had this voice in the back of my head saying ‘You’re too late, you missed the boat.’ I finally feel like I’m following my destiny. Yes, that sounds cheesy and ridiculous. Whether it’s fate or not, that’s the path I’m on now and I couldn’t be happier about it! You were eliminated in sixth place – is there anything you regret not showing on the series?
I was really hoping to make it to the final three so I could put on a damn show for the whole world to see! I’m really proud of how far I went, and I’m happy I got to show off some really me looks. And I went home with a solo maxi challenge win, a team maxi challenge win, and a runway win under my belt. In other words, I did the damn thing! The only part I really regret is not being there for episode eight where Hungry joined as a guest judge. We’ve been in touch since then, but I would have loved to meet them in person. In terms of looks, we don’t do a ‘Watcha Packin’, but trust and believe I had plenty more zany looks to show. Look out for them on my Instagram.

What would you say is the main difference between Drag Race Thailand the US version?
Yes, it’s the same format. Yes there’s a mini-challenge, maxi-challenge, and runway. But that last part is where it’s totally different. The runway is not just wearing a beautiful outfit. It becomes a challenge of its own because it requires a stage presentation. It needs a reveal, it needs a magic moment, or it needs a story. Unlike Drag Race US, your runway look can’t be the same energy level from beginning to end. It has to be a show. You can’t just go out with pretty looks and interesting make-up. You need to entertain people. It’s not harder than RPDR, but it is different.

What other differences would you say there are?
There’s a very high regard for storytelling in the runway challenges, and the judges want to see that in the outfits we wear. Like, is there a poetic quality to how you’re answering the brief? You’ll see that in upcoming episodes. But in episode two, the brief was ‘Under the rainbow; what happens after the rain?’ So you need to think of a story. What happens to the world, to nature, to the sky? How are you going to present your work? They don’t just look at your runway, they ask you to tell them beforehand what it’s gonna be. They look for a conceptual narrative, and it comes from Thai culture where there’s so much folklore, mythology, and storytelling. It’s something that has to be part of what we do. Aside from that, I think there is a really strong sisterhood and mutual support among us queens. I don’t know how it is on the US show, but I get the feeling there are rivalries and drama there. For us, there is sometimes mini drama, but we all have each other’s backs and we all want each other to succeed. For me it’s been especially meaningful to be on the show. For the first time ever, I have a drag family. I’m not a drag orphan anymore! I’ve been adopted! You touched upon the drag scene in Thailand – what has it been like for you there?
I think that there is a really high focus on the live performance aspect of drag in Thailand. Thai queens love doing numbers with the live recordings from big concerts. It’s like they want to recreate the arena-sized feeling in a club environment. There’s a hunger to be the megastar and to bring the audience into that fantasy, even if it’s a tiny bar. Angele Anang, one of my co-stars on the show, is amazing at this. She’s the Beyonce of Thailand. Same with Kandy Zyanide—she’s the Ariana Grande of Thailand! Impersonating these stars is so not my gig at all, but that’s why I absolutely love it.

And what’s it been like to be a US queen on the show?
It’s already bonkers to be competing on anything like Drag Race because of what they put you through. And doing it in a foreign country is extra, exponentially bonkers. There are so many extra layers that make it more difficult, like nuances we miss or cultural elements we just don’t understand. But it’s worth the struggle! If we’re going to be international drag queen superstars, then it’s time for us to get truly international. Fabulous is a universal language, darling. I was actually surprised there weren’t more international queens cast because so many applied and so many auditioned. I was like ‘Damn, there’s only three of us here!’ They were really selective and strategic with how they put the cast together.

It’s mad how you went from working in advertising in the US to competing as a drag queen on Drag Race Thailand…
It’s so crazy! You know how they say, ‘You have to live a life worth writing a book about’ or whatever? Well, mine would be some crazy weird pop-up graphic novel, but it would be worth reading. It’s all been a wacky adventure. It hasn’t all hit me yet, and it’s really just getting started. Drag Race Thailand almost had a cisgender female drag queen on the show…
Yas! Cis female queens are breaking stereotypes. But it’s bigger than that. It’s an issue of self-expression. Nobody should question whether someone can be who they want to be. The only question is who has the most talent? Who has the most skill? Who can make the most transformative change from their original self to the character that they become? That’s the same expectation I have of any drag performer, no matter how they were born. If she’s born pretty, then she better be a glamazon monster in drag! It’s the same with trans queens on the show. Yes, they’re prettier than the rest of us in the morning. But they absolutely go for it with their looks. They know the magic of drag is transformation.

Do you think, as well as cisgender female queens, that we’ll see more types of drag on the show in the future like drag kings?
I would love to see a drag king on the show. That’s a whole different area of creativity. Again, the question is can they find a way to make a major transformation? That’s one of the amazing things about televised drag; no matter whether it’s Drag Race US, Drag Race Thailand, or Dragula, we’re exploring and questioning the concept of gender expression and gender identity. In the words of Mama Ru, we’re all born naked and the rest is drag.

Do you think US audiences are ready for cisgender female queens and drag kings on Drag Race?
I think Drag Race US works a bit differently. I mean, they’re so successful and they now have 11 seasons, plus 100 seasons of All Stars. I think there are some unwritten rules that they live by, but they’re also finding new ways to break them. I’m sure that RuPaul and the producers truly do admire all different types of drag. It seems like their challenge is to find a way to introduce new elements to a fandom that may take some time to open up.

What can we expect from Genie in the next year?
Ooh child, all sorts of fun things! Look out for me on the Drag Race Thailand S2 reunion episode and finale! And then in May, I’ll be making an official appearance at RuPaul’s Drag Con LA. The week after that, I’ll have some performances and gigs throughout SoCal. Follow me on Instagram at @wishforgenie to see what’s coming up!

Related: Sasha Velour on deconstructing gender and what it would mean for drag.