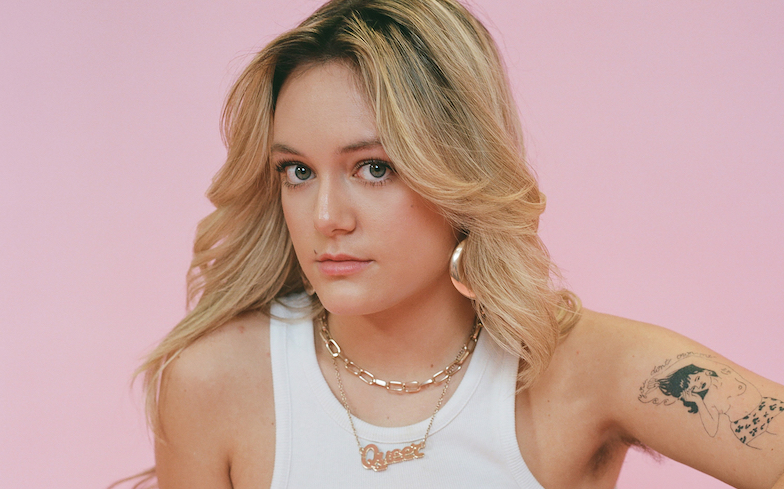 “I think my book will encourage my readers to demand a new level of love for themselves, that they have spent years giving to others”.

Florence Given, newly established author, has shared her empowering thoughts on her debut book, Women Don’t Owe You Pretty.

Exploring her compelling journey as a feminist, the incredible book also touches upon the importance of self-love, protecting your energy and acknowledging your privilege.

“Writing about my queerness, for thousands of people to see, is a concept that my 14 year old self would have shuddered at the thought of,” Florence tells GAY TIMES. “Now I feel more proud about it than ever.”

Women Don’t Owe You Pretty is a vital read to remind women they owe the world nothing, least of all pretty.

Your book is described as being part of the disruption necessary to remind women that they owe the world nothing, least of all pretty. Was there a moment in your career or life that sparked this?
Ever since I learned about the male gaze theory and the objectification of women’s bodies, and how much we ourselves have internalised this gaze and made it our own aspired standard of beauty, I haven’t been able to stop wondering where I end and where the patriarchy begins – in terms of how I act, appear, talk and dress myself. In short, I asked myself, ‘Is the identity I’ve constructed even mine, or was it what I built to cope and survive within the structures of patriarchy?’ A lot of this questioning is also what lead me to accepting my queerness.

Did this also ignite your passion to write your debut book?
Yes. I’ve always channelled my anger into my artwork and my writing.

In your book you mention growing your body hair – was this a moment you felt in control of your body? When you make bodily choices, do you feel empowered?
I had come out of an awful long-term relationship and one of the first things I did to restore the autonomy I felt I’d lost to years of compromising, was binning all of my razors and letting my hair grow out! I’d always wanted to do it, and now that I could exist without the constant surveillance of the male gaze (my ex), I felt room to breathe. Although, that feeling of surveillance doesn’t go away entirely. Women have learned to internalise this surveillance, and we impose it on ourselves almost every time we look in the mirror. It’s patriarchy’s way of always ensuring that it has control over our bodies and our minds. I read a lot about this in The Beauty Myth recently, and it severely pissed me off. Any time a woman or marginalised person makes an autonomous, intentional decision about their body like this, it’s a small political act of defiance to do so. In a world that relies on your insecurities to turn a profit, choosing to find power in yourself and not external power systems for approval, is to flip those very power systems on their head.

Through illustrating and writing your book on your experiences, did you feel like it helped you to be more confident within your sexuality?
Writing about my queerness, for thousands of people to see, is a concept that my 14 year old self would have shuddered at the thought of. Now I feel more proud about it than ever. There’s no experience more healing than allowing yourself to be exactly who you are with zero apologies, especially when it’s something you have been ashamed of for so many years. Dating women and allowing myself to be intimate with women felt like coming home to myself.

Is there going to be an audiobook?
Yes! I’m actually going to be recording it from home in my bedroom due to the corona virus lockdown measures.

In your book you also discuss pretty privilege – was there a specific moment you realised your pretty privilege and the importance of acknowledging it?
I think it’s important to acknowledge that while all women suffer the immense demand to look a certain way, for marginalised women the pressure is a lot more intense. I’ve known and acknowledged consistently through my feminist journey that I am privileged due to being white, cis-gender, thin and able-bodied – but I’d never thought about how the overall combination of all of those things amounts to another privilege; one of ‘desirability’. The reason it’s so rare for women with ‘pretty privilege’ to talk about it the way we do with say, white privilege, is because we would have to verbally acknowledge that we are pretty. Prettiness, we are taught, is something given to us by men. Something that women are discouraged from verbally acknowledging ourselves! If we do? We’re ‘vain’. Desirability is also something we’re encouraged to view as a ‘preference’, instead of something informed by racism or fatphobia. Which, it almost always is. The application of ‘prettiness’, whether shaving, doing our hair, wearing make-up, wearing a push-up bra and even smiling, is something that women are taught we can apply to ‘advance ourselves’ – but it’s also the thing used to dismiss our intellect, or worse yet used against us to justify our sexual assault. You cannot win, however you decide to present your gender. They will find a way to douse you in shame for your choices. The only option is to do whatever the hell works for you.

You touch on the importance of inclusive feminism. How do you think we can educate more people on the toxicity of white feminism and how do you make sure your feminism is inclusive?
I got this wrong so many times when I started my feminist journey. At around 18 I became so angry with the things I was learning about racism as a systemic issue, so I started talking about them constantly online and including this message in my work. Until someone pointed out to me that the right way to go about advocating for other people is not to advocate ‘for them’ at all – but rather to use your voice and your platform to amplify the voices of people to tell their own stories. To share the work that – for example – people of colour were already making, instead of shouting about it yourself. So now I share work written by marginalised people to amplify their voice; not mine. But you don’t have to have a platform to ‘make a difference’. It’s so necessary that we use our positions of privilege to leverage conversations in our lives with our friends and family, and call people out when they say stuff that rings a little problematic or out-dated. Because they will listen to you. You’re going to fuck up so many times, but it’s far better to show up and make mistakes than it is to sit in your comfort zone, wrapped in your blanket of privilege and avoid discussing these things simply because it ‘doesn’t affect you’.

Your book also mentions protecting your energy – was there a moment in your life where you felt you weren’t protecting your energy and what did you do to change that?
As soon as I became single, I decided to make myself and my happiness my number one priority. I decided I was going to start claiming back all the energy I’d so freely dispersed to others back in to my own body, and honour the fuck out of my own desires from then on. That meant saying no a whole lot more to others, and yes to myself. When you live a life pleasing others expectations of you, you become resentful and exhausted. That’s no way to live your life! The minute I started viewing my energy and attention as a valuable currency, my life changed.

Your debut book is fighting back by challenging and questioning the toxic structures of the patriarchal society. Do you feel empowered sharing your experiences in your book and seeing it empower other women?
When you’re in the fog of something, whether that’s the emotional manipulation in your relationship, or defining yourself by patriarchal beauty standards because they’re so normalised – it can be a very reality shattering experience when someone pokes a hole in that reality, or ‘shines a light’ on something you’ve never seen before. The fact that my work is able to produce this effect absolutely empowers me to keep poking those holes – and to keep working on myself too. To name a few women who have done this for me; Layla Saad, Chidera Eggerue and Naomi Wolf. Having your perspective challenged is uncomfortable, but that discomfort leads to growth. I love breaking cycles and challenging one another’s perceptions with women. I feel like it’s what I was meant to do.

A chapter of your book discusses not finding comfort in other women’s flaws – do you think finding comfort in other women’s flaws comes from internalised misogyny? How can we unpack this?
We can unpack this by using other women as ‘mirrors’, instead of ‘screens’ that we project our insecurities onto. By choosing to see other women as ‘mirrors’, instead of saying “she’s a bitch”, you can deflect this initial criticism back onto yourself and ask instead “maybe she’s a ‘bitch” “…or maybe it’s me who envies the way she sets boundaries, and this just intimidates me”. Women are taught to compete with one another so we are more likely to prioritise receiving validation from men, than from each other – maintaining patriarchal power. Even acknowledging this will help your relationships with other women!

Do you think it’s important for young women to establish these boundaries of determining feminism on their own terms?
Yes! Because every woman has different desires, lived experiences, tastes, interests and patterns that she needs to break. The message that I promote is one of self-esteem and self-development. Because without self-esteem, a lot of women can’t even say the word ‘no’. We feel selfish for even having desires that fulfil just ourselves. Some of us don’t even know what our desires are, because we were never taught they were important! We are socialised to hate ourselves and we never feel ‘good enough’. This lack of self-esteem is patriarchy’s way of keeping us easy to manipulate and control. It’s up to each woman to decide what it is that she needs to live a fulfilled life.

Lastly, how do you think your debut book will expand readers’ views on themselves and how will it reflect in their feminism?
I think it will encourage my reader to demand a new level of love for themselves, that they have spent years giving to others.