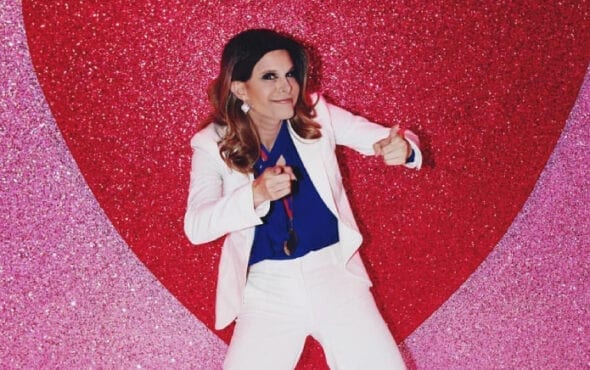 Trinity the Tuck has revealed her Snatch Game character for that long-rumoured Drag Race winners’ season.

On the latest episode of Snatched! – a GAY TIMES original podcast about all-things Drag Race – Associate Editor Sam Damshenas and Fashion Editor Umar Sarwar reflect on some of the most iconic Snatch Game performances in herstory.

Later, they are joined by Trinity the Tuck, who boasts two legendary impersonations to her name: Amanda LePore on season nine and Caitlyn Jenner on All Stars 4. While she placed in the ‘safe’ bracket for the former, she conquered the latter.

As well as reminiscing on both performances, including the drama and conflama with Gia Gunn, Trinity reveals the one celebrity that she’d like to embody if she returns for a season with former champions.

“Jennifer Coolidge has not been done yet! She’s been my back-up several times, so maybe I’ll pull her out,” she tells GAY TIMES, before imitating the actress’ iconic line from Legally Blonde: “Makes me want a hot dog, real bad!”

“She also does a lot of Botox, she’s a cougar, she plays the dumb blonde a lot. So, those things I relate to. It’s definitely something that I can pull from!”

Trinity admits that she loves being on television, so she will absolutely return to Drag Race if a winners’ season comes to fruition. She says: “Who knows if that will ever happen? Who knows, maybe I’ll do Drag Race UK next?”

The latest episode of Snatched!, titled How to Play The Snatch Game & Win!, is now available on all streaming services.

Sam and Umar are also joined by Drag Race UK season two runner-up Bimini Bon Boulash, who looks back at her Snatch Game-winning performance as Katie Price and reveals some behind-the-scenes moments that didn’t make the edit.

Listen to How to Play The Snatch Game & Win! with Bimini Bon Boulash and Trinity the Tuck here on Spotify and Apple Podcasts or below.