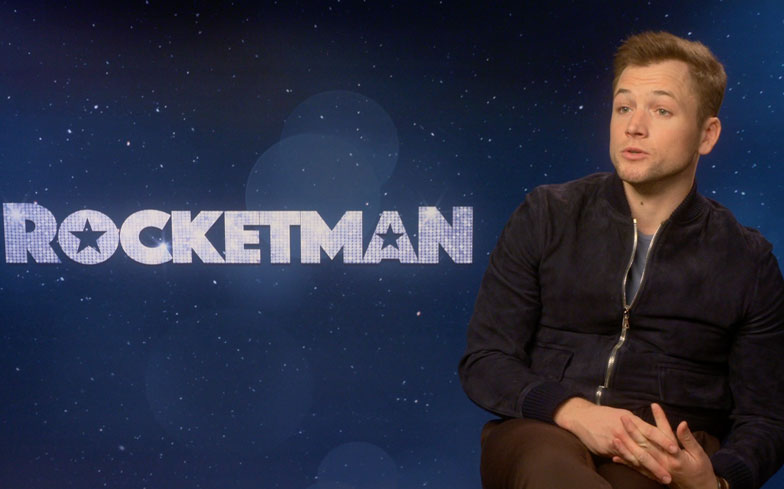 With a personality and career as illustrious and eccentric as Elton John’s, it was pretty much a given that a biopic of his life wouldn’t be a straight-forward affair. (Pun intended.)

Starring Taron Egerton as the iconic British singer-songwriter, Rocketman has been billed as a “fantasy musical,” blending traditional biopic storytelling with fantastic sequences soundtracked by some of Elton’s most famous songs.

There are moments when this big-screen portrayal of the musician magically floats in mid air, or performs one of his legendary songs underneath water. It adds a sense of the surreal to a life story that has certainly embodied that at times.

But at the centre of the stratospheric rise to fame and all the excess that comes with it is a young man struggling to understand his sexual identity.

“It’s interesting in two ways in our story,” Taron Egerton tells us when we speak about his approach to playing Elton during this time of his life. “One, because in the early parts of the film it’s not something Elton talks about very much because he worries about a reprisal and not being accepted – particularly by his new-found family and close friend Bernie Taupin. That required some delicate handling.

“And there’s also this scene where this young man loses is virginity, and I was very keen to know about his relationship with John [Reid] and meeting him. And also about how he found that time where he was discovering his sexuality.

“I always remember, he said, ‘To begin with I was just very drawn to guys. I just remember feeling that I wanted to be mates with them and spend time with them and hang around with them.’ He was quite naive at that stage. So that’s how I approached it.

“Then you have this scene with Richard [Madden] where they consummate their newfound love and fierce attraction for one another. If I’m not being self aggrandising, it’s a beautiful scene. And I think it’s very sexy as well.”

Rocketman’s refusal to dilute Elton’s sexuality and his desire for men for this Hollywood portrayal of his life has been praised by critics.

It also means that Rocketman has become somewhat of a first for gay cinema, with Elton and John Reid’s sex scene being the first of its kind in a film released by a major studio. Reid – played here by Richard Madden – was both Elton’s lover and manager.

Asked if he hopes Rocketman will lead the way when it comes to major studios’ more open approach to gay characters and narratives, Taron said: “I certainly hope so. I’ve got a feeling we’re not far away from a gay superhero. Times are shifting and it’s time [for that]. It feels appropriate.

“Elton’s life has been so about firsts and pioneering things, so for a movie about his life to be – as I’m led to believe – the first time an intimate scene between two men has been portrayed in a studio movie.

“Obviously it’s not the first time [overall] – there’s some fantastic pieces of gay cinema. Weekend is one of my favourite films, and then you’ve got Brokeback Mountain. But in a studio movie apparently, this is the first. So how exciting [it is] to be a part of something so zeitgeist, so progressive, and so forward-thinking.

“It’s just brave because there are territories where it may… I feel like we’ve put art before commerce a little bit. I think that shows integrity on the part of Paramount, and on the part of the filmmakers.”

Watch our full interview with Taron Egerton above.