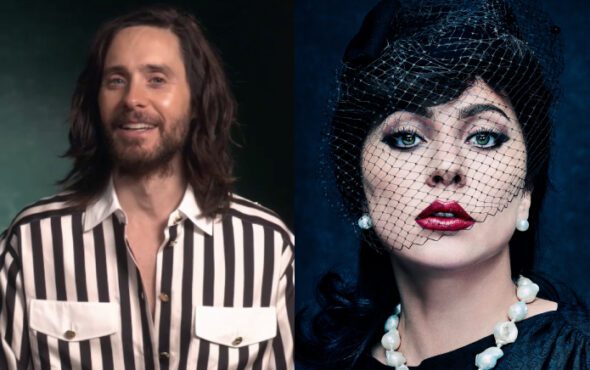 Jared Leto has opened up about his role in House of Gucci and his time on set with Lady Gaga.

Directed by Ridley Scott, the biographical crime drama stars the Chromatica leader as Patrizia Reggiani, who was convicted of plotting the assassination of her ex-husband Maurizio Gucci, and depicts the events leading up to his death.

Leto, who received an Academy Award for his performance as a transgender woman in Dallas Buyers Club, plays the late Paolo Gucci, the one-time chief designer and vice-president of Gucci who is widely credited with helping the fashion brand design their iconic double G logo.

Speaking exclusively with GAY TIMES, the star says it was “beautiful” to collaborate with Gaga, someone he’s known for a number of years, on the film.

“I think we are probably both a little crazy, which helps! So, it’s hard not to have chemistry with someone like her,” says Leto, before reminiscing on his time on set.

“I barely remember how it began, but I just remember I started dancing at one point and she’s dancing with me, Ridley’s just loving it and wants us dancing more and more. It’s just a blast to play a character like this and with a group of people so committed. It’s really a lot of fun.”

Leto spent six hours in hair and make-up to embody the eccentric Paolo, who provides some of the most hilarious one-liners in the film (alongside Gaga, of course). The 30 Seconds to Mars frontman is notorious for his shape-shifting characters in notable dramas – he gained 67 pounds to play John Lennon’s assassin, Mark David Chapman, in Chapter 27 – while Paolo is easily his most comical role.

When we ask Leto if he’s ever had this much fun on-set, he admits: “I mean, it’s a great question. I honestly don’t think I have. It was a dream come true. I got to dance and sing, and laugh and cry. You know what is a real beautiful thing?

“Is talking to people like you and seeing faces smile and hearing people talk about laughter. That’s honestly just a really rewarding thing. Just knowing people are engaged with a character and involved with a character, and they feel the heart and soul and the humour. It’s wonderful.”

Check out Jared Leto’s full interview with GAY TIMES here or below.