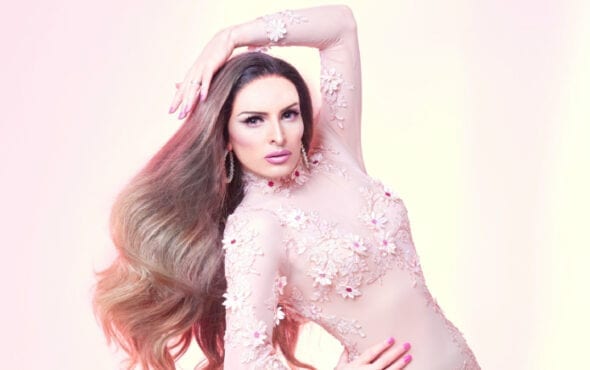 Speaking with GAY TIMES, Veronica – who recently rose to fame on the second season of Drag Race UK – said the track represents her own story “of a kid coming from a small town and wanting to find their place in the big city”.

“I didn’t fully find myself until I came to London and went to the different theatres and bars,” says the star, who hails from Rochdale in Greater Manchester.

“I always felt like there were no gay people in my town. I had to venture outwards to find where I belonged in the world. The stars shine bright, but you can’t have that without the darkness.”

As a self-professed musical theatre nerd, the inspiration for the single came from Veronica’s time in the West End, as well as her love for The Greatest Showman.

“Musical theatre is where my heart is right now. I always wanted to be in Wicked and I never got cast, so I’ll create the work for myself,” she explains.

“I just thought it was the perfect introduction, something that sets the stage and sets me apart from the hundreds of queens who have come and gone through the [Drag Race] doors. It’s a way for me to forge my own identity.

“If I wanted to, I could release a pop tune, but I want to path my own niche in this world. It’s important to be who you are and not what people expect you to be.”

Veronica says her long-term goal is to record a full-length collection of songs and adapt them into a musical based on her life story.

“There’s a trilogy of musicals and stories I could tell! We haven’t even scratched the surface yet. When it came to season two, you didn’t really get to learn who I am as a queen and what my references are,” she states.

“There’s so much more of my story to tell and I’m looking forward to showing that to the world now that I’m released from Drag Race!”

Stars is now available on iTunes and streaming services. Veronica says the music video is currently in production, and is scheduled for release next week (!).

Listen to Stars here on Apple Music or below.

Veronica sashayed away from the second season of RuPaul’s Drag Race UK in ninth place after contracting COVID in lockdown.

However, RuPaul told the season two contestants that she has an open invitation for the upcoming third season, which is slated for release later this year.

When we spoke with Veronica after her exit, she told us that she was in “limbo” over the decision to return.

“On the one hand, I do feel like my Drag Race journey is incomplete. There’s work to be done and I am a competitive person. I was taken out of the competition for reasons beyond my control,” she revealed.

“The fact that I’ve been given the opportunity to go back and finish that journey is definitely something that’s interesting to me. But, I’ve still got a little bit of time to make a decision, so… I’m sitting on it, for now! Make them sweat.”

You can read our entire exit interview with Veronica here.