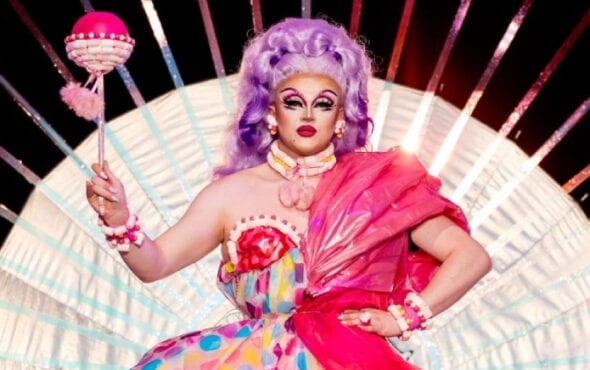 “Sometimes it’s like, ‘Girl, can I just watch it with no edits?’”

Ellie Diamond has revealed the cut scenes that she wanted to make the final Drag Race UK edit.

The self-described “baby doll of Dundee” made her debut on the franchise earlier this year for the show’s second season, where she wowed the judges with her stunning make-up skills and polished runway looks.

Shout out to Dirty Diamond, Ellie’s raunchy alter-ego who memorably exposed the star’s love for… well, you remember.

She ultimately made the grand finale, where she wrote, recorded and performed a verse for a remix of RuPaul’s track A Little Bit of Love with Bimini Bon Boulash, Lawrence Chaney and Tayce.

With zero maxi-challenge wins under her belt, Ellie sashayed away in fourth place while her sister Lawrence took home the the crown for Scotland.

Following her elimination, we spoke with Ellie about some of her most iconic moments from the series, including her lip-sync smackdown against Tayce, which became Drag Race UK’s first ever double shantay.

After we praised Ellie for “matching” the performance ability of Tayce – the season’s bonafide lip-sync assassin – in the showdown, Ellie said the final edit didn’t accurately reflect what happened on the main stage.

“Girl, I didn’t match Tayce. I did ten times better than Tayce! Lawrence and Bimini were both like, ‘That lip-sync was yours, hands down.’ There’s so much you didn’t see in that lip-sync. They edited so much out,” admitted Ellie. “It’s probably because the episode was far too long and they thought, ‘This will be too much.’ But, they edited so much out and I wish they never because there were some better moments in that lip-sync.”

Ellie also said there were some sincere moments with fellow contestant Sister Sister where they discussed their personal lives in detail, including their relationships with their families, that were left on the cutting room floor.

“That’s the horrible thing about the show, is that they’re only gonna take a little bit. Like, there’s so much they didn’t use,” she explained.

“I guess that’s for TV purposes, they want to get the best drama or whatever, but sometimes it’s like, ‘Girl, can I just watch it with no edits?’”

You can read our entire interview with Ellie Diamond here.