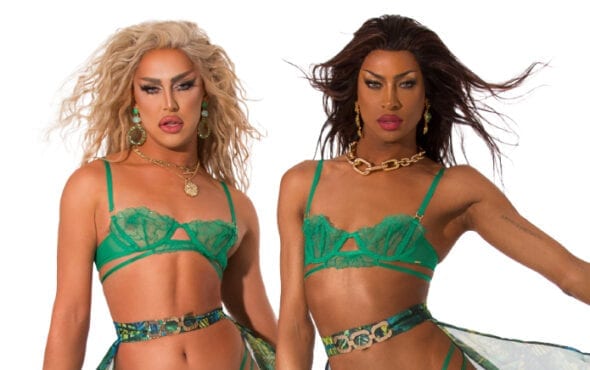 Tayce and A’Whora have launched a Pride campaign to repeal anti-gay laws in Commonwealth countries where the LGBTQ+ community still face imprisonment and the death penalty.

The incredible new lingerie collection from Bluebella Pride will donate proceeds of their sales to the Kaleidoscope Trust, a British non-profit organisation that campaigns for the human rights of queer people in countries where they are discriminated.

Being homosexual is still illegal in 35 of the 54 sovereign states of the Commonwealth.

Tayce, who placed runner-up on the second season of RuPaul’s Drag Race UK season two, said: “It is appalling that being gay is still a criminal offence in most Commonwealth countries.

“We are campaigning to appy pressure on those 35 countries to repeal these oppressive laws which thwart lives, perpetuate misery and exacerbate the impacts of the HIV/AIDS crisis.

“The Bluebella Pride Campaign is all about celebrating Gay Pride in the UK this summer, but it’s also important to note that in several countries in the world LGBT people face being arrested and thrown in prison for being openly gay.”

In Malaysia, gay people face punishments such as 20-years imprisonment with flogging, while Malawi imprisons ‘offenders’ with 14 years and hard labour. Two countries, Brunei and Northern Nigeria, have the death penalty.

Tayce’s season two sister (and flatmate) A’Whora said: “In many of these 35 countries there is already growing unrest that these discriminatory laws still exist, and so added support from this campaign in the UK may be all that’s needed to elicit change.”

Bluebella founder and CEO Emily Bendell said: “We have recoloured some of our bestselling styles to create this beautifully bright collection which is all about celebrating Pride, but at the same time supporting the amazing work of the Kaleidoscope Trust.

“We’re very proud to be supporting an organisation that is affecting such positive change across the Commonwealth.” Phyll Opoku-Gyimah, executive director of Kaleidoscope Trust, added: “We are delighted to have the support of Bluebella, Tayce and A’Whora in raising money for our important work upholding the human rights of LGBT+ people across the Commonwealth.

“So many LGBT+ people suffer discrimination, persecution and violence because of homophobic colonial-era laws, and the UK has a responsibility to redress these wrongs and help liberate our LGBT+ siblings. The support of a quintessentially British brand like Bluebella, with two of our brightest LGBT+ stars means the world to all of us at Kaleidoscope Trust.”

There are 2.9 billion people estimated to be living in these countries, and 174 million of them identify as LGBTQ+.