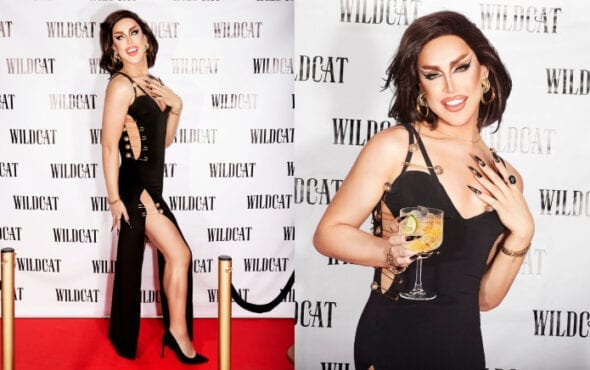 The high-fashion ensemble, which the actress wore to the 1994 Four Weddings & A Funeral premiere, was recently named the nation’s favourite limelight-stealing red-carpet moment in a poll from Wildcat Gin.

It conquered over Jennifer Lopez’s green Versace dress at the 2000 Grammy Awards, Lady Gaga’s four-costume reveal at the 2019 Met Gala and Cher’s Bob Mackie look at the 1986 Oscars.

A’Whora, who recently rose to fame as a competitor on RuPaul’s Drag Race UK season two, where she placed fifth, recreated the dress to raise funds for Not a Phase – a UK charity committed to supporting the lives of transgender adults.

“Liz Hurley is an icon and a legend, just like me! And this dress is as iconic as her. I’ve been compared to Liz myself, so I’ve loved recreating this look with Wildcat to give her a run for her money. Who wore it best?” said A’Whora.

“My top tip to stealing the limelight is to always go for the unexpected, any idea you come up with first, scrap it! Think of another ten ideas, then another, then another! Your last idea, that’s the one, because no one will have thought of it first.”

A’Whora added: “That’s how you make an impression.”

Kenny Nicholson, Head of Modern Spirits at Wildcat, called A’Whora the “standout fashion queen” of Drag Race UK season two, before saying she “truly embodies the Wildcat spirit, of truly being yourself and owning that limelight”.

“I am delighted that we will be auctioning off the dress for an incredible charity that also helps other people to be their true authentic selves,” he added. Founder of Not a Phase, Dani St James, said in a statement: “The projects that we have rolling out to benefit the trans community have only been made possible by the kindness of those who have uplifted us.

“When I say this, my mind automatically turns to notable figures like A’Whora, who have been so generous with their time and platforms during the past year.

“Not only that, but these images of the Liz Hurley Versace dress recreation…what a knockout! Donnatella should be quaking in her boots!

“On behalf of myself and the team at Not A Phase, I’d like to thank Wildcat Gin, A’Whora and everyone that supports this fab campaign, we are so thankful for you all.”

A’Whora’s recreation of Liz Hurley’s dress will go on auction this Friday (30 April). More details will be revealed on Wildcat’s Instagram channel.