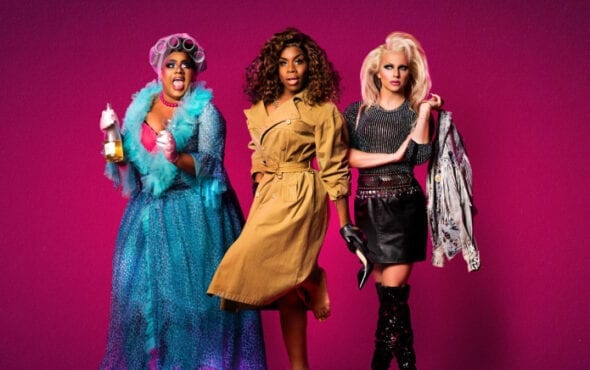 Death Drop is one of the most ridiculous plays we’ve ever witnessed on the West End stage – and that’s quite a feat given all the over-the-top shows we’ve covered. Written by Holly Stars, the play is set in 1991, on the night of Charles and Diana’s 10th wedding anniversary. The preposterously-named Lady von Fistenberg (Vinegar Strokes) has invited half a dozen celebrity guests to her manor on Tuck Island for a meal in honour of the royal couple. Over the course of the evening, one by one, the guests start to drop dead – or rather, do a death drop. Can we guess who the murderer might be?

It’s refreshing to see a show that doesn’t try to be something it’s not, and knows its audience as well as this one does. This is not a polished, slick, glitzy and glamorous West End affair – this is camp, chaotic, silly, trashy… and all the better for it. It’s a bit of fun for those who love all things Drag Race, and fans of the show will undoubtedly enjoy Death Drop. Both Courtney and Monét really entertain, and display impressive vocal prowess, while Vinegar – after a slightly shaky start – really comes into her own, especially as more of her character’s back story unfolds.

Holly Stars steals the show as the Bottomley triplets Blue, Brie and Spread (apparently their mother was a big fan of cheese). There are a handful of punchlines which really had us laughing out loud, and they all belong to her – her deadpan delivery had us cackling. Drag king LoUis CYfer is superb as disgraced Conservative MP Rich Whiteman (yes, really), with a healthy dose of humour thrown in. Kemah Bob as film maker Phil Maker has some amusing moments and Anna Phylactic is a perfect fit as newspaper editor Morgan Pierce.

It does have a bit of a pacing issue. The first act passes fairly briskly, and includes a genuinely excellent original song, ‘Til the Next One Drops’, written by Flo & Joan. However, there’s a real slump after the interval and it takes a fair while to get going again. It does eventually get there, but things would have been much improved if the running time had been trimmed a little. It doesn’t matter in the grand scheme of things, though – we still had a thoroughly entertaining night.

Is it everything we wanted it to be? Well, the plot is wafer thin and very silly, it’s all a bit rough around the edges, there are a few slipped lines and missed cues, there’s a minor set malfunction and it’s a bit too long. But in spite of these issues we still had a really great night out. Death Drop is proudly very different to all the other shows in the West End right now, and it’s great to see an all-drag performance in a venue like this. Drag Race fans will of course lap it up, but there are enough jokes here about 1990s British culture to appeal to a broader audience. If you’re looking for something as camp as Christmas to brighten your festive season, look no further.