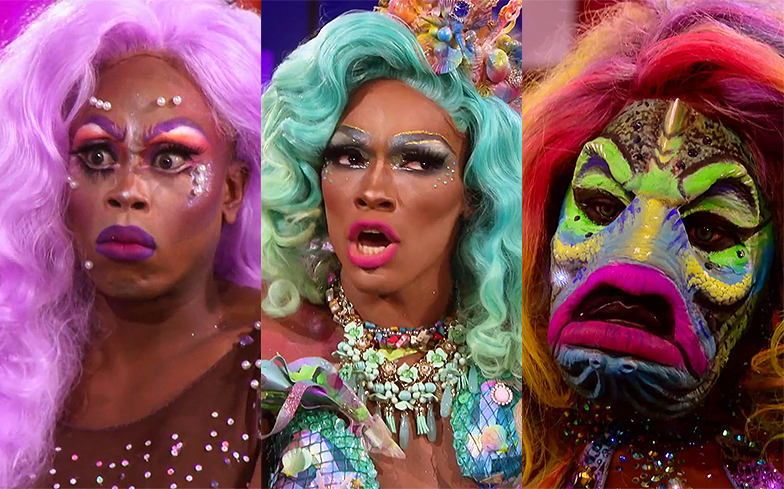 “If I go home tonight, I will go home knowing that I was loyal to some disloyal bitches.”

As you all know, this week’s episode of RuPaul’s Drag Race featured one of the biggest ever fall-outs on the main stage.

After the queens performed in the series’ 11th Snatch Game, and sashayed down the runway in their finest mermaid eleganza, Mama Ru asked the queens the dreaded question, “Who should go home tonight?”

The Vixen used the opportunity to slam Eureka O’Hara – who she’s previously had conflict with in the competition – in front of her fellow queens and the judging panel.

“I have never seen such a level of unprofessionalism as I have watching Eureka and it baffles me that you guys enjoy her so much,” she told the judges. “It really has been very difficult working in an environment with her because she takes all the air out of the room.”

In response, Eureka said: “In my defence, I tell everyone all the time ‘I’m sorry I’m so loud’ and ‘I’m sorry I’m too much’” to which The Vixen interjected, “But you don’t stop trying to be loud or try to stop being too much.”

In Untucked, the drama escalated when the political performer questioned each queen on their reason for nominating her.

Asia stated that The Vixen had hit a “plateau” as far as her progression in the competition.

“If I go home tonight, I will go home knowing that I was loyal to some disloyal bitches,” replied The Vixen, to the confusion of Monique, Asia and Kameron Michaels. “But, I’m not going to accept that I am, either unprofessional, hard to work with, or uneasy to get along.”

After several shady back-and-forths with the queens – and a video message from her mother –  The Vixen showed a softer side to the “bear”, in which she revealed: “I don’t cry for nothing. It only takes good things to make me cry.”

She continued: “On that runway, when ya’ll said my name, I wasn’t mad, I was hurt. Because, what ya’ll are not taking into account, is this is my dream. So, to say that I should go home because I’m not having the best time right now, is fucked up because at least I’m trying.

“So, I got a fucking song to learn because I’m not about to let you bitches take shit from me.”

The seventh episode of RuPaul’s Drag Race season 10 is now available to stream on UK Netflix.

10 harmful myths about bisexual people, and why they’re wrong