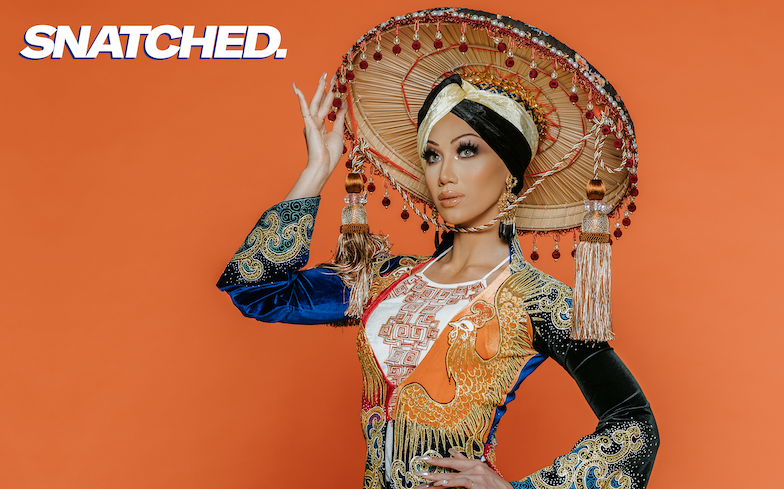 “I think it’s my responsibility to spread awareness of queer Asian representation.”

Vietnamese tilapia Plastique Tiara was at the forefront of one of Drag Race’s most controversial eliminations earlier this year. Although the Texan performer and biological woman was leaving us gooped week-after-week with her runways, she was – spoiler alert! – eliminated in eighth place after lip-syncing against Miss Vanjie, despite having a better track record.

Because she’s a certified businesswoman, Plastique took advantage of her newfound fame and launched her music career with the dance-pop banger Irresistible. Due to the lack of representation for Vietnamese culture in mainstream media, Plastique is now aiming to use her platform and talent to be a “pioneer” for the queer Asian community.

“I never had anyone like me, of my nationality and my background, make it on national television, especially a queer drag queen!” she told us. “There are so many beautiful aspects to our culture and I want to change the Asian image that everyone has in their head. I want to be everything and to do everything a Vietnamese queen can do to break into the mainstream.”

In celebration of her success, we caught up with Plastique to discuss her time on the Emmy Award winning series, whether we can expect to see her sashay into the werkroom once again for All Stars, and why it’s so important to embrace her heritage within her art.

You’ve just attended your first DragCon as a Ru girl – how was it?
It was pretty magical, and it was a little bit tiring! But seeing all of the fans and the little kids makes it all worth it for me. I started drag and then worked at a booth from nine until closing, so having my own booth and having all these young kids coming up dressed as me is surreal. I never thought it would happen. It was always a dream of mine. Now that it’s happening, I have to remember to pinch myself every now and again like, ‘Oh wow, this is my life.’ After seeing their faces, the tiredness just goes away. It reminds me of why I love what I’m doing and why I do what I do. How has life been since Drag Race season 11 aired?
Honestly, watching myself back, I see that I’ve grown and learned so much from that experience. I think I was finding myself, and after the show I’ve learned so much more as a person and as a drag queen. My life has taken a complete 180 turn, my whole lifestyle is different, my sleep schedule is different and I’m travelling every hour of the day, performing for these amazing people. I was gonna have two days off but my manager called me like, ‘Hey! Can you fly tomorrow?’ I went from being a hair stylist, 9-to-5, now I’m here… I’m flying at 5am to go to some gig! It’s crazy.

Let’s go back to the beginning: what inspired you to audition for Drag Race?
When I first moved from Vietnam to here, I didn’t know being gay was a possibility. I was denying the fact that I am gay for the longest time because I was raised to belief that what I am is not right, what I am is what society will never accept. So coming here and finding out that being gay is okay and there are successful people being gay was life changing. The first queen I fell in love with on Drag Race was Jujubee. It just blew my mind. I had never seen anything like that in my life before, especially an Asian drag queen who is so fabulous and being her authentic self on national television. From then, I took a leap of faith and tried drag when I was 18 at a local bar. I then won a pageant – all in secret. I would get ready and then sneak out of my house at night. But then I found Alyssa and she adopted me, and she told me to audition for the show. It was my first time auditioning and somehow I got on! Here we are!

What was it like to have Alyssa as a mentor?
From idolising her to getting to know her, I think she is much more than an amazing drag queen, she’s an amazing person with such a caring heart. Before I even went on Drag Race, she would always remind me that I’m a star and that I will be a star. When I came to her house, she was rummaging through her stuff and she was like, ‘Take everything.’ She told me, rather than trying to win so hard, was just to have fun, kiki, make friends with everybody, don’t take it so seriously – and what did I do? I took it really seriously! One thing I would do if I came back, is to have a lot more fun. When she appeared on the screen in Untucked, I realised that I missed the memo. I need to have fun. I gave it all I had… and she won a challenge! And then she went home! It must be hard not take it seriously in that environment? Especially when you’re surrounded by 14 other queens – you were the youngest too!
Oh for sure! Everyone has their game face on, everyone’s got their best drag on the runway, so I couldn’t help but be competitive. I’m very competitive by nature, so I just went in full steam ahead and was like, ‘I need to win this shit!’

Well you are a member of the Haus of Edwards…
We’re all very hot blooded, and I am an Aries so it does not help!

During your time on the show, you opened up about the struggles you’ve had with your family, which led to a tender moment with RuPaul – how did that feel? I don’t think RuPaul’s ever hugged anyone!
Yeah, he’s never hugged anyone on the show! It was a huge moment for me because I did not think that he was going to do so. I didn’t plan for that whole breakdown to happen. I was like, ‘I’m gonna have a nice little talk with RuPaul and then get back to my costume.’ Something about what he said triggered this flashback in me. He asked me why I wasn’t showing personality and it made me remember when I first moved here and how I was taught to be silent, and to censor myself in order to get people to like me. I didn’t know any English, so I was really shut out from everybody. There was no one to be there for me, so I never had the chance to speak up and tell my truth. So in that moment, I collapsed. To have somebody that I have looked up to and idolised for so long embrace me, it was amazing. He didn’t have to do that. He’s RuPaul. He’s probably heard this story a billion times over. It was something that I will never forget.

How was it for you when you lived in Vietnam?
I moved when I was 11-years-old, and it was a very different time back then. My parents were divorced and on the weekend I would go to my dad’s place in a rural area. I didn’t grow up with any gay people in my life, and if there was one gay person he or she would be the joke of the town. Being gay would essentially mean that your family is doomed. It would mean that you would never find work, you would never be successful, you’re an abomination to the community. It’s like your family has done something wrong for your child to be gay. That’s why I was silenced for so long, because I didn’t want anyone to find out that I was feeling that way. For an LGBTQ person to survive in Vietnam at the time was very hard because there were no protections. The government didn’t care, the police didn’t care. If there was someone who decided to gay bash a person, we couldn’t do anything about it. We had to run and hide. There was a lot of confusion from your fellow contestants over the relationship you have with your family – were you surprised?
Oh yeah for sure. We didn’t get to see the confessional while filming, so watching it back I was really surprised, but I don’t expect them to know about my life, the immigrant life and the Asian immigrant life. It can be very different, and immigrant life can’t be told, it can’t be written down or translated. It can only be lived through. My family is my own experience – I tried to explain it the best I can. If they don’t get it, I’ve just learned that it’s not for them to get. It’s my story and it’s what I went through that made me who I am today. The audience seemed to get it, so I don’t know what happened with them! At the end of the day, we’re all sisters and we went through this experience together.

A lot of fans were offended when Silky assumed you were Japanese – how did you feel about her comments?
It was strange for her to say that, but it’s a drag show and it’s a reading challenge. RuPaul always says it’s a safe place and if you put love behind it, then there is no need to take offence. To the audience, especially my Asian community, there was a lot of fire to defend me! [Laughs] I really appreciate it, however, I do think that Silky is a good person and I encourage everyone to take it as a learning experience rather than an opportunity to throw fuel into the fire and hate on her even more. She has been a character this season to receive a lot of hate from the audience and I don’t want that for my sister.

And how has your experience been with the fans?
I am very fortunate to have amazing fans who will defend me to the end, and I have my boyfriend here to keep me in check! I’m very lucky to have a good reality grasp. All I keep getting is nothing but love so I can’t be any more grateful than that. I try my best to put as much positivity and light out there as I can rather than putting scrutiny on another queen. You often embrace your Vietnamese heritage throughout your art – is this important for you to?
It’s so important. Having a big following, I think it’s my responsibility to spread awareness of queer Asian representation. I don’t see Vietnamese people represented in the media that often. Growing up, I never had anyone like me, of my nationality and my background, make it on national television, especially a queer drag queen! I want to be a pioneer and spread awareness of how beautiful Vietnamese culture can be. There are so many beautiful aspects to our culture and I want to change the Asian image that everyone has in their head. I want to be everything and to do everything a Vietnamese queen can do to break into the mainstream.

Can we expect an EP or an album?
I’ve been thinking about it… We have something in the works right now. I’m just trying to put out as much content as I can and maybe I’ll do a Vietnamese song next time. It’s something I really want to do. Maybe, we’ll see!

Last question: All Stars 5 – are you down?
[Laughs] I guess we’ll just have to see! If an opportunity arises, I will not hesitate to represent myself and my community on a national level. RuPaul always said do not deny a chance to have sex… or be on TV. I have my boyfriend, so I’m not gonna deny another chance on TV.

Watch the video for Plastique’s debut single, Irresistible – now available on Spotify on streaming services! – below.