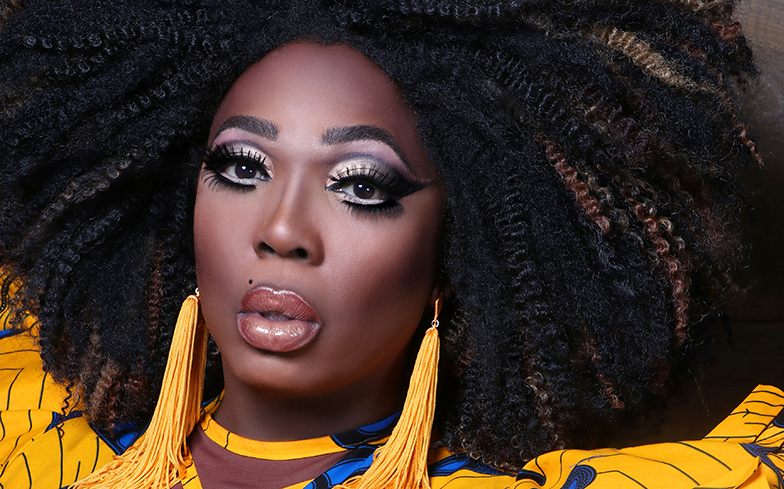 “I always say, ‘With privilege comes responsibility.’ That is why we are doing this.”

Earlier this year, six of the most legendary Drag Race queens launched Nubia, an all-drag spectacular of “opulence and regality” that celebrates “unadulterated Black excellence,” making HERstory as the first ever drag tour with an all-Black cast.

Described as a “show-stopping extravaganza thrown directly in the face of racial division and political divisiveness,” Nubia came to fruition after season one winner, Bebe Zahara Benet, noticed the lack of representation for queens of colour on the show’s national tours. After a conversation over lunch with Monique Heart and Peppermint, the stars recruited Bob the Drag Queen, Shea Coulee and The Vixen to produce a groundbreaking all-Black spectacle.

“When I told them about the idea, there wasn’t even a doubt,” Bebe tells Gay Times. “We are in a position to lead conversations and be pro-active, and hopefully be able to change minds and perceptions. What is also important is people of colour; little boys, little girls, who can look at us and say, ‘Hey, Bebe and the rest of the sisters can do this. I can do it. I belong. I’m worthy. I bring something to the table.’ That’s the responsibility that we have to take on.”

In celebration of Nubia’s success, we caught up with the iconic Jungle Kitty songstress to discuss its origins, the ways in which white queens can better support queens of colour, and why the show is happening at the perfect time.

Condragulations on the success of Nubia – how did this show come to fruition?
I have always wanted to do a show that was made of girls of colour, that represents and showcases diversity. There’s something about Black excellence, there’s something about live entertainment and it goes way past Drag Race. I have always wanted people to experience Black entertainment in all different shades and facets of what it is. I think it became way more apparent for me after Drag Race became super popular, and all these tours were being created. I never saw as much representation as I wanted to, there was always that one token person or Black girl that was put there, and that was it. What is happening to all these amazing Black entertainers? Even the fans demanded it. They said, ‘Where is the diversity?’ That was very noticeable as the show became popular and started creating tours. So I was sitting with Monique Heart and Peppermint having dinner and I was like, ‘Listen. I’ve always had this idea and I think it’s an amazing idea. I think we can create a lot of conversations because this is not just about the money, it’s about getting people super active. You cannot just be sat in the corner. You have to be pro-active.’ So when I told them about the idea, there wasn’t even a doubt. I wanted it to be produced by the talent, the queens, so then we scouted all of our other sisters, and that’s how we built the cast. My goal for Nubia is not just about Drag Race girls. I want to open it up to more sisters, whether that’s from Dragula or other girls of colour that aren’t from Drag Race because there is so much amazing live talent out there. Like every other show, it needs to start small and then build out from there.

What would you say to the people who doesn’t understand why it’s important to have a show that celebrates queens of colour?
We all have things that are unique to us. You have something unique to you, and I have something that is unique to me. So when you come and see the magic, you will experience and celebrate my gift. You are coming to celebrate my talent. You are coming to experience something that you might not be used to or you might not know. When you see the people who are working on this… it’s a village. We have so many people, from our producers, to our directors, our stage managers, I mean, it’s a village that is making this show happen, to the calibre that you’re going to witness. You are coming to celebrate my talent and my gift, and you are going to be entertained. When you go and see the other tours that have Black queens and white girls, you are still celebrating their gifts, so you can come and do the same thing for us as well. Come and be part of what is unique and powerful about us. There’s nothing wrong in you coming into my home and seeing what my house has to offer, if you look at it that way with an open mind. That’s why our shows have sold out. It’s not just Black people coming, it’s white people coming to celebrate Black diversity. That’s all.

Does it get tiring having to explain why people of colour need spaces like Nubia?
It is tiring, who wants to explain the same thing over and over? It should not be a conversation, do you know what I mean? The lack of diversity and inclusivity should not even be a conversation. It’s not even just about Drag Race or Nubia or entertainment, it’s so very prevalent in so many areas, in humanity. It should not be a point of conversation, but… we are also living in the real world. The situation is what it is. The reality it is what it is. I always say, ‘With privilege comes responsibility.’ That is why we are doing this, because we are in a position to lead conversations and be pro-active, and hopefully be able to change minds and perceptions. What is also important is people of colour; little boys, little girls, who can look at us and say, ‘Hey, Bebe and the rest of the sisters can do this. I can do it. I belong. I’m worthy. I bring something to the table.’ That’s the responsibility that we have to take on.

Over the past few years, there’s been a lot more racism within the Drag Race fandom. Do you feel like this show has come at the perfect time?
I do believe that everything happens when it’s supposed to happen. If you asked me to do this show two, three years ago, what would the scenario look like? I cannot answer that question, but I believe in divine timing. I believe that this show was meant to happen at this time. This is when it was supposed to be birthed. Regardless of the bullies online, I think it was written in the universe that it was going to take place. I say that because many years ago, there was still that bully. It has not changed. The trolls have always been there honey! There might be more now, but they’ve always been there honey. Trust and believe.

Do you think the race issue will continue to get worse?
I think so. I think it has. Coming from season one and looking at how it has evolved now, I think it’s become… really bad to see. When we started the show, when I went into the show, I never expected fans to have that approach in how they treated the different entertainers. I think what has happened is that people see us on Drag Race and they choose how they want us to present ourselves. Fans will be like, ‘I want her to dress this way, I want her to talk this way.’ They build up a fantasy and story of what each girl needs to be. When it’s not what they want it to be, it becomes a problem and they don’t like you, and then they go for blood. That’s just my opinion, but there’s a huge part of the fanbase that show love, support and celebrate us; not just girls of colour, but the girls in general. That is what is beautiful, because it’s just a little amount of trolls honey! You cannot put your energy on those kinds of people.

What do you think your fellow non-queens of colour and allies can do to tackle the racism?
Use your platform to speak on these issues. If someone comes to you and says, ‘Jennifer, I love you so much but I don’t like this Black queen,’ it’s your place to stop that situation. I’m not saying that everybody is going to like me and I’m their cup of tea, but you as a white queen, while you’re taking that glory, can stop people being negative to other people. You have that power. You can also delete and block or you can say something. If you choose not to say something, it makes me question where you stand or what you believe in. That’s what you have to do when you’re online or in a meet and greet, you have to be pro-active in the little things that happen. Teach your fans on the kind of conversations we should be having. Just be pro-active. If you hear that Nubia is happening, tweet it! You know? Show your love, show your support. It’s not taking anything away from you, it’s not taking any money away from your pockets, it’s not affecting you. Just show love and support! We have girls who are not of colour who will be coming to Nubia just to show love. That’s all we ask. It’s all the little things, it’s not the big moves that make a difference, it’s the little bits of support. We’re all given platforms, if yours is a bit bigger than another person, then you have the responsibility to speak on certain things. That’s how!

So what kind of performances can fans expect from Nubia?
I don’t want to give a lot away because it’s just so magical when you come see it, but we’re dealing with girls of colour who are all very different in their aesthetic and performance. What I love about Nubia is that the fans and the audience are coming to witness what we choose for them to witness, and that is what they want to witness. That’s how you take the power, because our gift is our gift and you cannot say, ‘Oh, I want Bebe to be the lion queen.’ When I am the lion queen, it’s because I choose to be the lion queen. You know what I’m saying? The beauty about Nubia is that when you come, you are going to see each girl in their own world, in their own queendom, being able to showcase who they are, what they are and what they want you to receive. We’re talking about dancers, amazing visual aesthetics… it’s a production! It’s going to be really cool.

Okay well then I have to ask: can we expect some rakatatititata?
Well girl, if you mind? [Laughs] If you mind! There might be another little surprise, but I’m not going to give anything away! A little surprise…

I’m still bopping to Jungle Kitty!
That was two years ago! I have some new stuff coming out that’s about to turn the party girl!

So tell me about this new music!
Do you know what, the fans have been demanding new music since last year because I didn’t release anything, and that was by choice. ‘Bebe, where is the new music?’ So I’ve been in the studio cooking some things honey! I’ve been cooking!

Due to the spread of the coronavirus pandemic, Nubia’s May 1 performance at Teragram Ballroom in Los Angeles has been postponed. The show is currently in the process of being rescheduled for a future date and all purchasers will be issued a full refund. Sign up for the email list at nubiatour.com and follow @nubiatour on Instagram for the latest updates.

While we wait for news on Nubia, check out the video to Bebe Zahara Benet’s infectious new anthem, Banjo, below.