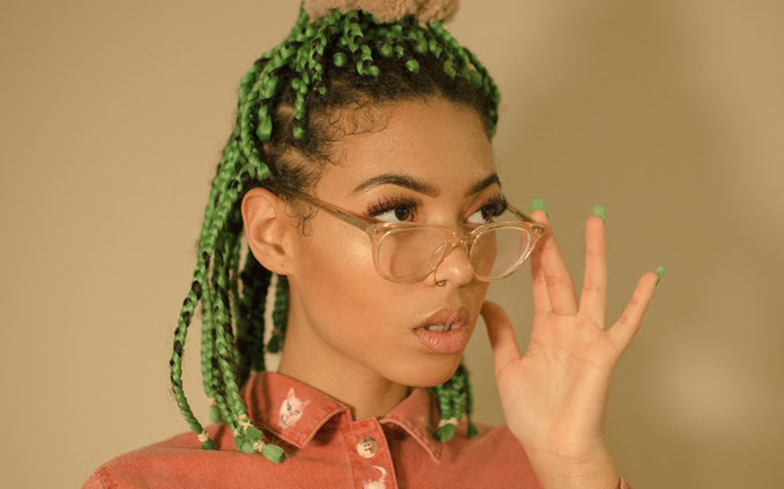 “How I feel about being queer and brown is probably how a lot of the world is feeling.”

Dizzy Fae first caught our attention last month with the release of her ethereal video for Her/Indica, a stunning depiction of the Minnesota artist’s first time falling for a woman.

“It might or might not have been real love, but it was something that helped me love myself, which is very fun and very beautiful,” she tells us, before opening up about her identity as a queer woman.

“I believe that queer is the blanket for it all. It’s knowing who you are, and being okay with who you’re not.”

Like a whole new generation of LGBTQ artists, Dizzy is ready to conquer the world of music and fly the flag as an out-and-proud musician. “If I can be anything, it’s that person that someone can look at and be like, ‘I feel you’,” Dizzy explains.

“How I feel about being queer and brown is probably how a lot of the world is feeling.”

We sat down with Dizzy and spoke about her incredible mixtape, touring with Lizzo, and being a liberated queer woman of colour in the music industry.

Can you tell me a little bit about your mixtape Freeform?
Freeform is just a collective of songs that made a mixtape. It’s not conforming to a formal structure. I’m very pleased with it – it’s like a baby.

My favourite song is Booty 3000.
Yes! [Laughs] Actually, I have a really funny story about that. I did a show at a college and I was full on twerking on stage, and doing what I’m doing, going left, right. I finish the performance, and it’s the end of the show, and this mom comes up to me with her daughter, who’s maybe ten-years-old? The little girl wanted to take a picture, so I took a picture with her. Her daughter stuck out her tongue and her mom was like, ‘No! Put your tongue back in!’ Then her mom comes up to me alone and says, ‘How did you twerk like that? How did you move your butt like that?’ It was the funniest thing I have ever witnessed. I was thinking about that today because I was like, ‘Wow, Booty 3000 is definitely a jam. It makes you feel good’. It’s basically about doing your thing. And you can be like, “Play with my booty and tug on my hair” and give me the pleasures, but… I got me. I got me. So. I listened to it again today and I was like ‘Yaaas!’
That’s what you needed! And that’s what I really enjoy about the project as a whole, because each song is so different from each other where it gives you a chance to connect. All these different types of people are coming out the woodwork and it’s so sick. It’s a beautiful thing to see, so I’m glad that you like it!

You have quite a unique sound, where do you get inspiration from?
I trained in opera and classical music for four years, so that’s kind of where I discovered my vibrato. Then I got into jazz – I grew up on jazz and played the trumpet when I was younger. But I’m not sure where I get my inspiration from because I haven’t heard a singer who sings quite like me, who I could grab onto and learn from.

Will your debut album be an evolution of the Freeform sound?
Yes, it will absolutely be an evolution. That’s what I’m trying to do with my music, always evolve, and have a consistent journey. The new music is just… tight. I’m so excited to release this new music. It’s a little more upbeat but my voice has a different kind of soul to it that makes it R&B, but it’s not. It’s more poppier, dancier, rockier – it’s some different shit. It’s so sick. I work with three producers, and I’m so thankful to be working with people that know what they’re doing, and allow me to come into a room and be who I wanna be, say what I need to say. That was one thing I was a little bit afraid about in the industry, is being not just a brown woman, but a woman. Being put into situations where I don’t get a say, and I don’t get a voice, and I really wanna amplify that you can do what you want, and have a whole team that backs you up.

A lot of other artists would kill to have that.
I have been so blessed. When things keep going good, you’re like, ‘Hmm, why?’

‘What’s gonna happen next?’
Yeah, like what the fuck?! You never know what can happen. You always have to expect the unexpected. I think by being myself, I have let good people in. It’s a constant rotation of love.

Your video for Her/Indica had queer undertones. Was this intentional?
So, I fell in love with a woman. I’ve always played around, always dabbled, had my little sleepovers. I fell in love with this woman at 16, and it was a little more experimental for her but for me, it was like… ‘This is tight’. I discovered so much about myself. It’s like waking up in the morning, being like, ‘Oh, I just woke up’. It might or might not have been real love, but it was something that helped me love myself, which is very fun and very beautiful. So, I have that experience in the back of my head. I’d written that song last year, and it’s really cool to see people connect to it. They’re two different songs, but Her is this discovery, this feeling, this lust and affection. Indica is basically, ‘Alright, this is what it is, you’re still human so I’m still gonna do me’. I’ve grown another piece of me that I know about, and I’m constantly trying to discover myself, so it’s a very deep feeling.

As a musician, do you think it’s harder to be out and proud at the start of your career, or to come out later on?
Definitely later. I think that coming out is a beautiful thing. I give kudos to everyone who came out during the biggest part of their career. For instance, Frank Ocean. Being in this group, Odd Future, with these skater boys, and being like, ‘I don’t just fuck bitches’, it’s amazing. I definitely think it’d be easier coming out at the beginning, being straight up. That’s a huge part of yourself!

How important is it to have queer perspectives in music?
It’s so important. It’s how most of us live. We have a strong community, and when you have that community behind you, you’re good for the rest of your life because we’re loyal, and we know how to love. It’s amazing. Some of my biggest fans are the LGBTQ community.

LGBTQ fans will support you throughout your whole career.
Yeah, your whole career. I went on tour with Lizzo, and being on tour with her, you see that a lot of her fans are LGBTQ. Every night was just filled with happiness and love, people wanted to be there, everyone was feeling the energy, people were connecting. So if you’ve got the community behind you, you’re good.

Lizzo was recently a guest-judge on Drag Race. Did you watch it?
I know! She’s really good at talking, and she’s really quick! That’s one thing I noticed about her. I haven’t seen it yet, but I know I need to see it. I saw it on her Instagram and I was like, ‘Good for her!’ That’s a perfect place for her.

You need to watch it because the two queens in the bottom lip-synced to Good As Hell.
No way! Oh my god. I’m so shook. I have to. I’m going to.

You also played a show with Kehlani, which must’ve been massive. Has she been an inspiration for you?
Oh yeah. I really love Kehlani’s social media. I think that she is so real, and uses her platforms in the best way she can which is really beautiful to see. She makes you feel like you’re part of the journey and I love artists that can provide that. Something that will keep you going. I think she’s an amazing artist and I think it’s super cool that she’s locked in a little more to her gayness.

How important is it to have more LGBTQ representation of people of colour, especially?
I’m definitely trying to be that. If I can be anything, it’s that person that someone can look at and be like, ‘I feel you’. How I feel about being queer and brown, is probably how a lot of the world is feeling. The world is feeling that. There’s so many people out there that are just like me and biracial, and queer. What I can do is provide that understanding, that connection, and that’s not what I’m striving to do, but it’s definitely something I’m trying to be a part of. That’s something I’m thinking about a lot lately, and figuring out how to explain that. Articulation is easiest when I’m writing. So, I’m really trying to articulate things that mean the most and one of the most important things to me is being queer and brown.

It’s exciting to see the music industry become more inclusive of the LGBTQ community, isn’t it?
Love is love! I don’t understand how everyone hasn’t grasped that concept already. Amateurs.