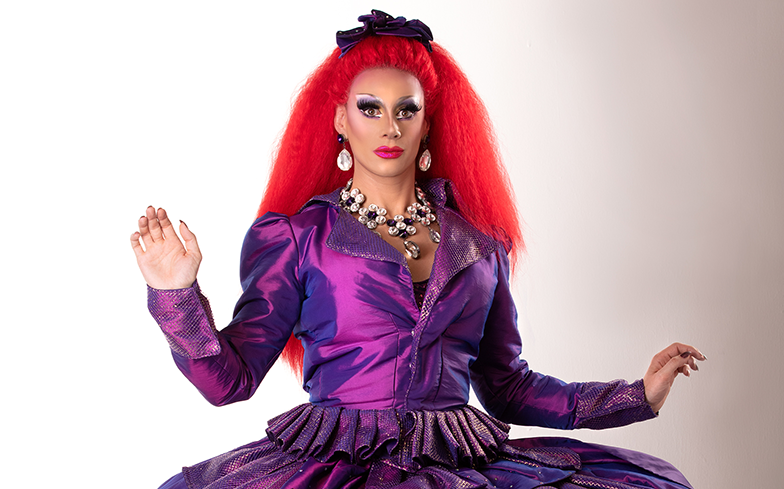 “I think it’s very difficult in the UK to argue against having AFAB and trans queens on.”

Although she led pretty much every poll on social media and sashayed into the final as the only queen to not land in the bottom two, Divina De Campo lost out on the title of the UK’s First Drag Race Superstar last week to The Vivienne.

Divina didn’t win the crown, but she did win the hearts of Drag Race viewers around the world thanks to her sharp wit, deadpan sense-of-humour and for her part in forming the most iconic girlband of the decade: The Frock Destroyers.

“There’s been a bit of a lack of that kind of stuff happening in the music industry at the moment,” she says of Break Up Bye Bye’s chart success. “I think there’s a bit of a hunger for the thing that’s not so serious and… not so beige.”

Now, Divina is touring the UK with her fellow competitors and readying herself for a solo assault on the charts (Frock Destroyers are still together, calm the fuck down) with the ever-so serious pop track, A Drag Race Song.

Here, we speak to the legendary red-haired, silver-dressed performer about her time on RuPaul’s Drag Race UK, her “interesting” new EP and how she wants the show to evolve for its upcoming second season.

Oh, and she also spills the T on Scaredy Kat’s whereabouts this week because for some reason, it has been BREAKING NEWS.

Hi Divina! I saw you and the cast reunited this week.
Yes! We were all together, having a lovely dinner.

Why wasn’t Scaredy there?
Oh, she was off seeing her university friends. Just after rehearsal we were like, ‘Shall we eat together?’ She had already gone to meet her friends.

Finally, mystery solved. Condragulations on making the top two of Drag Race UK – how are you feeling?
Really good, yeah. Great. I didn’t have any pre-conceived notion of winning or anything like that, so I just went in there not worried, not stressed. Just, ‘Hey, Sera Sera.’ Well, who would have thought it in the first place that I’d come second? I’m not sure if anybody would have bet on that! So I’m really really pleased with how everything went, and I’m super excited about the future.

You’ve been labelled the UK Katya because you’re a massive fan-favourite with an irreverent sense-of-humour who lost the crown. How does that feel?
I mean, that’s super lovely. How can that not be lovely? Phwoar. Amazing. I just had so much love after the show, it’s been so wonderful and everybody’s been just so nice, which has been a good job.

What was it like meeting her on set? You seemed much more rejuvenated after you saw her.
Yeah. That was what? Week six? Or week five. Whenever it was, I’d sorta already gone in my head, ‘It doesn’t matter now. You’ve made it quite far and at this point, actually it doesn’t matter. You’re not gonna die. If you’re gonna make a fool of yourself, you’ve already done it. It’s too late now!’ Her telling me to imagine RuPaul and Michelle Visage as my assistants really helped and made me go, ‘Yeah.’ Actually, in the grand scheme of things, nobody else’s opinion matters. It’s only yours that matters. It was really really helpful to see her.

One of the most emotional moments this season occurred when you opened up about Section 28 – what kind of response did you receive online after?
It’s been really wonderful. I don’t think a lot of people had articulated it in that way before, the actual effect it had on people. It really did, it had a terrible effect. If you don’t know about something as a kid, there’s no reference point or understanding what’s going on in your own head. Consequently, there’s a lot of people who bottled up those feelings and tried to change themselves, which we’ve seen with electroshock therapy and all that. All it does is make people desperately unhappy. One of the reasons why male suicide is so prevalent in our country is because we don’t talk about feelings, we don’t talk about how you don’t have to be the ultimate macho man.

Do you think it’s our responsibility to teach ourselves LGBTQ history, or is it down to others, such as history lessons at school?
I think now there’s an argument for those things to be brought into schools. You’re not born a bully. That’s what it is. Anything that’s strange at school, kids pick on it, whether you’re ginger, you’re fat, you’ve got glasses, you’re gay, whatever. When you’re taught about it, it doesn’t become strange. It teaches you emotional intelligence as well, that’s a big part of it.

You were also at the centre of one of the most iconic moments in Drag Race HERstory, thanks to the Frock Destroyers. When you were filming it, did you ever expect it to have this much impact?
[Laughs] No! There’s been a bit of a lack of that kind of stuff happening in the music industry at the moment. If you think about the 90s and the 80s, there was always… not joke music, but people who were a bit off, left-field, shall we say. Steps always had their dance routines and everybody lived for the dance routines, and there isn’t anything like that at the moment. I think there’s a bit of a hunger for the thing that’s not so serious and… not so beige.

How was the tour?
Oh, we had so much fun. I absolutely adore working with Blu Hydrangea and Baga Chipz. They’re just so much fun.

Can we expect more dates to be announced? They’re in demand…
I have a feeling in my waters that yes, there may be some more dates for the Frock Destroyers.

Would you like anything to be switched up for Drag Race UK season two?
I think it’s very difficult in the UK to argue against having AFAB and trans queens on. We are one of the most diverse drag scenes in the world. This season was great because everybody was so very different, but still, it’s a tiny slither of what the UK drag scene is actually like. I would like to see some drag kings, drag queens, AFAB queens and some trans girls as well. I think it’s important.

So when you sashayed into the werkroom, were you surprised at the lack of diversity?
No, it’s not part of the RuPaul brand. That’s what I would like to see, but it’s not my show. If it was called The Divina De Campo Drag Race, it would be a different story, but it’s called RuPaul’s Drag Race. RuPaul is looking for what RuPaul is looking for. It’s difficult. If it’s not broke, don’t fix it but I think it’s difficult to argue against it in the UK.

Who would you like to see on season two?
Boris Johnson. He’d make a good drag queen because he lies all the time.

There’s my headline. Thanks for that.
‘Divina De Campo wants to see Boris Johnson on Drag Race.’ No, that would be the worst thing ever. Who would I like to see on Drag Race? There’s so many amazing queens on the scene. There’s Brenda LaBeau, I’d really like to see her. She’s scouse, she sings, she dances, she sews, she does wigs beautifully and her makeup is great. She is full of drama. She would be TV gold.

The Vivienne said Brenda too.
I know Brenda really well, we’ve worked together quite a lot. I’d like to see her… Almost any of the girls from Manchester. There’s so many amazing girls there, it’s such an incredibly diverse scene. It’s like half a mile square, the village, and there are so many different drag queens there. It’s quite something. If you haven’t been to Manchester, I would very strongly recommend it. It’s worth a trip. Who else? I’ll go back. Maybe this time I’ll win, come out of a box. ‘Hiya!’

We have to talk about your new single A Drag Race Song – where did the inspiration for this come from?
I think a lot of the time, people realise music for the sake of releasing music. That’s sort of how I feel about it. Sometimes people release music when they really shouldn’t. Everything that I do, there are layers to it. You can take the surface layer, the entertainment, or you can look at it deeper. A lot of what I make is like a collage. There’s lots of different elements and then it all adds up to an idea, whether you understand what that idea is or not. To me, that doesn’t really matter. It’s more about me making something that I’m interested in and hopefully, other people will be as well. That was kind of… what it was. It’s a tongue-in-cheek poke at everybody. Obviously, I love all of that music, like I love Manila and Alaska’s tracks, and Adore makes amazing music, so it’s not that I don’t like that. I absolutely do. But it’s all very similar isn’t it?

Will an EP or album follow?
My EP is more kinda interesting music. Do you know what I mean? Not interesting, but there’s a bit more going on. It’s not just a self-referential song about drag. It’s coming very very soon, and the video for A Drag Race Song is coming within the next week!

Oh my god. What can we expect from the video?
There’s camp drag, burlesque drag, femme drag, punky drag – I’m in a beard for one bit, a big orange beard with hairy armpits. It’s a very serious piece of work.