Did that kiss overshadow Strictly Come Dancing’s Week 4, or were there more important things? 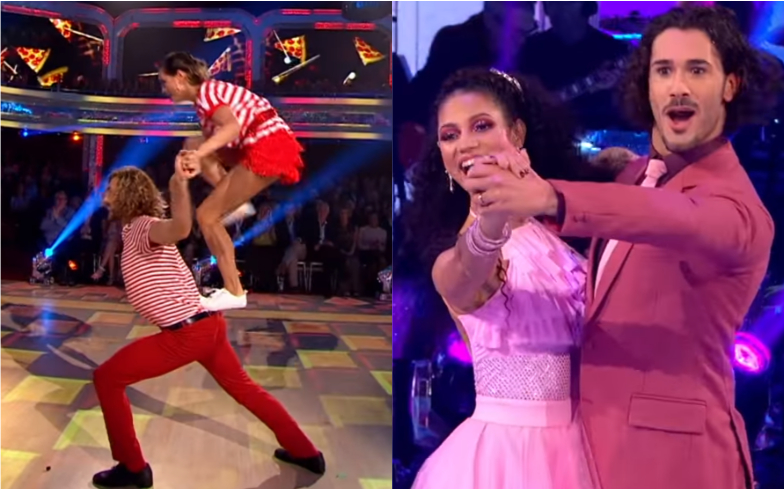 “I thought that dance belonged behind the newsdesk.”

Strictly has not had a massively quiet week this time around. For those of you who may not be in the know, comedian Seann Walsh has been photographed kissing his professional partner, Katya Jones. Cue plenty of on-screen apologies, a very public break-up and almost everyone involved with the show having their say.

And when the news came that the pair would still be taking to the floor for yesterday’s show, the eyes of a nation tuned in, just to see how things went. And while they patiently waited, we were all treated to a rather good show. Usually after a theme week, there’s a bit of a drop as nothing can really compare to the previous week’s spectacle.

But this time around, even though the scores did drop down a lot, I enjoyed every performance. Even the ones that were on the lower end of the leaderboard were still fun to watch for their storytelling or other elements.

Last week, we lost Blue singer Lee Ryan, which is a shame because I thought that he had the potential to deliver a jaw-dropping performance, but that’s the way Strictly goes. In our poll, 34% of you voted Faye Tozer and Giovanni Pernice’s Grease-inspired quickstep as your favourite dance of the night. And the genius of Katya’s choreography got Seann’s Matrix-inspired paso doble to second place with 21% of the vote.

But with Seann and Katya’s kiss still dominating the headlines did it risk overshadowing the whole show?

Me looking for Sean and Katya in the background at any given moment #strictly2018 pic.twitter.com/ZoN2HMvL8F

Well, we started out with a competent cha-cha-cha from Joe Sugg. The cha-cha-cha is proving to be one of the more challenging dances this series, and it seemed to trouble Joe. I couldn’t fault his hip action, but most of his movements looked a bit stilted and as a result his performance seemed quite forced.

But following that slightly off performance, Vick Hope shined in her quickstep. Vick is improving week upon week, and I loved everything about this quickstep. Even though she was dancing second, it still stayed with me by time the show ended. The same can’t be said for Danny John-Jules’s Viennese waltz. It had a beautiful serene quality to it, and even though it was good it was ultimately forgettable.

Coming into Faye’s rumba I was slightly sceptical about the song choice. But the slowed down version of Chandelier really worked, and they delivered a smooth, sensual performance. Can’t say I agree with the judges on the lack of connection between the pair, because I felt the romance.

I also felt the story from Katie Piper’s jive, but where she lacked the sharpness in her kicks, the performance wasn’t great. Meanwhile Charles Venn showed just how consistent he is by scoring his fourth 25 in a row after his salsa performance.

We then got to Lauren Steadman and Dr. Ranj Singh’s – or Miss Ranje as he’s known on sister show It Takes Two – performances. Both couples were the only ones to get lower scores each week, but this time they both returned to their heights in Week 1. I loved Lauren’s quickstep, and I didn’t notice any lack of synchronicity, the bit at the start did seem choreographed that way, plus she had what might have been the best VT skit of the week. And Dr. Ranj’s paso doble showcased his strengths and has given him a bit more staying power.

Someone who might not have a lot of staying power however is Kate Silverton. Although she excels in the ballroom categories, her samba proved that she really doesn’t cope with the Latin dances. But, neither did Katie Derham from Series 13, so there could be hope for Kate. Graeme Swann then performed a lot better in the jive than I thought he would. I’ll be honest, I thought his charleston from last week was a one off, but he’s actually starting to get the hang of dancing.

This princess will be ready for the ball! 😂#strictly2018 pic.twitter.com/ASy0mdiABG

And then, it was the moment that the nation was waiting for. There had been reports that Seann and Katya’s dance had been changed from the sensual rumba to the charleston in wake of what happened, but you couldn’t tell. Putting the personal stuff to one side, he delivered a pretty good charleston, and Katya’s genius in the choreography shone through once again with some moves that will never leave my mind.

Closing out the show was Stacey Dooley with a foxtrot. And although the story of her dance saw her break down in Grimsby, there was nothing grim about her performance. She was definitely one of the better dances of the night, but I hesitate to say that it deserved to be on the top of the leaderboard over Ashley. But as there may be some bias clouding my judgments, I’ll say she deserved it.

Although I genuinely enjoyed each performance last night, for me this time voting was a no-brainer. I absolutely loved Lauren’s quickstep, and I want to see more from her ballroom, so I cast my vote her way. But Ashley, Seann and Vick certainly deserved a vote as well. And as I loved both of the quicksteps performed last night, you can watch them below.

Even if the public desert Seann because of the personal issue, it’s hard to see him going home as his performance was very good, and he’s considerably high up on the leaderboard compared to other celebs. Katie and Kate would be the obvious choices as to who’s going home, as neither gave out a particularly strong performance, but Charles has already been in the bottom two and it’s not liked he’s moved particularly high up the leaderboard. I would say Lauren might be in danger, but if she was saved after her dire performance from last week, I’m sure she’ll be saved after this routine was so much better.

But what was your favourite dance of the night? Let us know by voting in our poll below.