Exclusive: Darren Criss reveals what ACS: Versace and Glee taught him about the gay experience 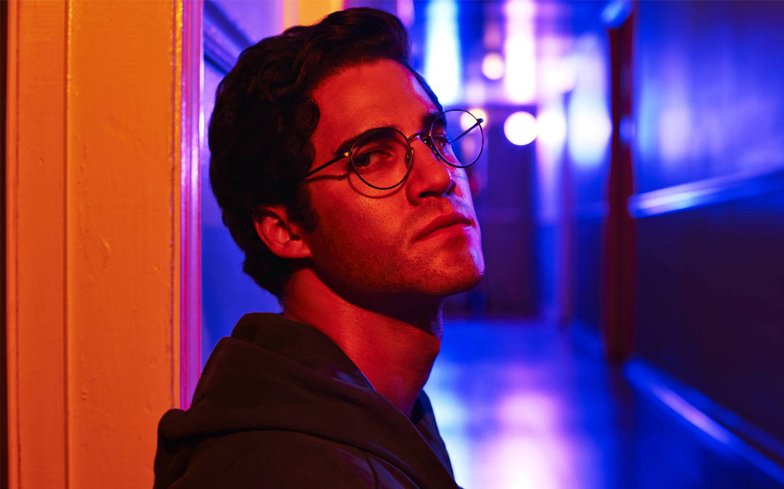 While viewers in the US have already been treated to the harrowing series finale of The Assassination of Gianni Versace: American Crime Story, there are still two episodes left to air in the UK.

Darren Criss plays serial killer Andrew Cunanan in the Ryan Murphy-produced series, chronicling his murderous rampage back in 1997 which concluded with the fatal shooting of world-renowned fashion designer Gianni Versace.

The award-worthy performance sees Darren Criss at his finest, and is worlds away from the last gay character he played in one of Ryan Murphy’s television shows, Glee.

Gay Times sat down with Darren during his visit to London to find out what, as a heterosexual actor, he has learned about the gay experience having researched the characters.

“They are two very different roles,” he told us. “Glee was really an extraordinary beam of positivity – especially for primetime television with mass appeal for young people. It was a wonderful example to set on television, and to be a part of that was really a thrill.

“The Assassination of Versace is really the opposite end of that spectrum where you’re really displaying the turmoil of that gay American identity. Particularly through the navy and military and what people had to go through, and still have to go through.

Related: Here’s why you must watch the new series of American Crime Story: Versace

“I think it’s cool that I’ve been able to be a part of telling both sides of that narrative, and see how far we’ve come and how far we have left to go.”

One of the main points Darren took away as a viewer of American Crime Story is the intense political and social climate around LGBTQ people serving in the US military back in the 1990s.

It was the era of the Don’t Ask, Don’t Tell policy being introduced, where LGBTQ recruits were expected to hide their sexual if they wanted to serve. Openly gay people were prohibited from enrolling completely.

“The great thing about this season of American Crime Story was really learning more about – and this is not about the character I played, but rather being a part of the show and watching it – the gays in the military episode,” Darren told us.

Jeffrey Trail – who was one of Cunanan’s five victims – did an anonymous television interview back in 1993 before the Don’t Ask, Don’t Tell policy was introduced by the Clinton administration, revealing the struggles LGBTQ recruits faced.

That moment in history is featured in an episode of The Assassination of Gianni Versace: American Crime Story, outlining the rife homophobia that existed around the time Cunanan committed these atrocious murders. “It was really illuminating because it’s something that we know about and it’s still talked about in the United States. It still continues to be a divisive topic in our country,” Darren continued. “It’s sort of an abstract concept because most of my friends aren’t in the military, so I’m not as close to it as some people are.

“To me it seems very clear-cut, but when you get into the complexities of what it means to people, like how do you do marry an identity between two things that mean a lot to you. There was a lot of stuff that was explored that I necessarily wasn’t as familiar with, and I was thrilled that it was told on television. I’ve never really seen anything like that before.”

Darren added that although Andrew Cunanan’s sexual identity in part informed his actions, that inner conflict is something all humans can relate to on some level.

“I think even beyond it necessarily being a gay narrative, it’s a human narrative,” Darren told us. “Irregardless of anyone’s sexual identity they’re just fascinating human tales.

“You don’t have to be Chinese or African or any other race or identity to understand the triumph of certain historical events, or the struggle and conflict we’re all familiar with.

“Conflict is what makes drama. When you witness these conflicts within these young men and women in our show, you can’t help but relate to their resilience or their ability to get through it.

“It’s been a real privilege to be a part of that, because to me it’s less about gay identity and more about human identity.”

The penultimate episode of The Assassination of Gianni Versace: American Crime Story will air on BBC Two tonight at 9pm.