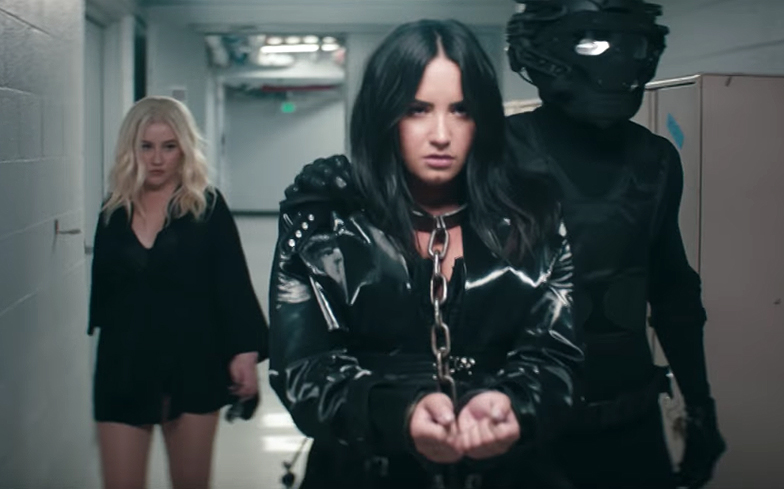 Two of pop music’s most celebrated voices have teamed up for a patriarchy takedown.

Christina Aguilera has bagged a massive collaboration for her long-overdue comeback in the form of fellow powerhouse vocalist Demi Lovato, and the two certainly haven’t wasted the opportunity to leave a mark on the world.

“It’s just the way it is, maybe it’s never gonna change, but I got a mind to show my strength, and I got a right to speak my mind,” the two divas sing over the industrial track, which encourages “little girls” to know they’re “more than flesh and bones”.

And the music video, which was released this week, reflects the powerful message of the song as Legend X and Demi are kept prisoner and forced to perform in a sexualised manner by the men that ‘own’ them.

Fortunately, the women fight back, and manage to plot an escape together which involves literally taking down multiple guards and emerging into the sunlight, where they share a warm embrace and several headphone-shattering ad libs.

“Fall In Line is as much about supporting each other as it is about self-empowerment,” Christina explained.

“It wanted to convey that in this video by visually representing the imprisonment that so many of us have felt, and the freedom we can achieve TOGETHER.”

Following raunchy comeback single Accelerate and emotional ballad Twice, Fall In Line is the third track to be taken from Christina’s much-anticipated sixth studio album, Liberation, which is due out on 15 June.

As well as her collaboration with Demi Lovato, the new release will feature a track with Keida and Shenseea titled Right Moves, and see appearances from Dolla $ign and 2 Chainz on the previously released single Accelerate.