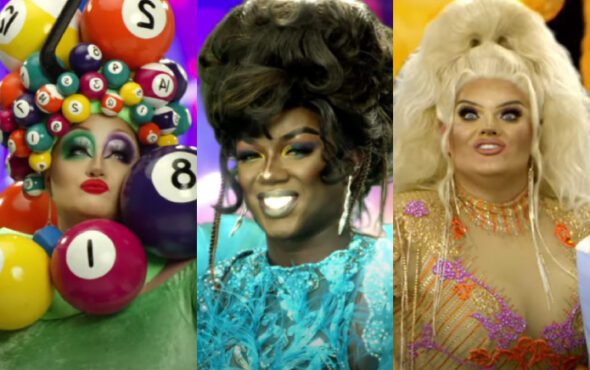 Set to the beat of Ultra Naté’s classic house anthem Free, the 40-second teaser shows the 12 contestants (with the help of green screen) serving British pub and club excellence as they pour pints and feast on prawn crackers while, of course, serving face.

There’s also a cameo from the one and only Judge Judy as RuPaul tells viewers: “You, my dear, were born to stand out and Mama Ru has an invitation for you. Whip off those slippers, defrost the prawn ring and slip into a Drag Race state of mind.

“Come as you are, or even better, come as you want to be. Because the only person who can judge me is Judy! So shantay you stay. Love who you are and join the party.”

Arriving just seven months after Lawrence Chaney earned the title of the UK’s Next Drag Superstar, season three will debut on BBC iPlayer on Thursday 23 September.

While you wait, check out our exclusive interview with the entire cast here, in which they spill all of the T on this ‘iconic and nuts’ new era of RuPaul’s Drag Race UK.