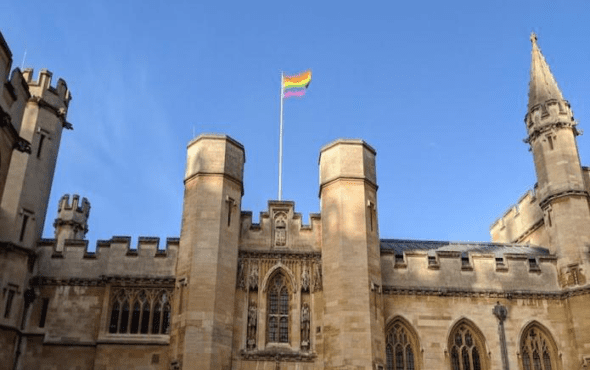 University of Cambridge students were informed they must remove ‘all flags and banners’ following a month of LGBTQ+ History celebrations.

Students and staff at Jesus College were directed to remove all flags and banners from the display, including LGBTQ+ flags.

The email, titled ‘LGBTQ+ Pride Flags and Banners’, was sent on March 1st which marks the end of the annual LGBTQ+ History Month.

Joe Shaughnessy, a PhD student at Jesus College, told CambridgeshireLive why frustrations surfaced over the email. “As a queer student at the college it leaves a sour taste in my mouth that taking down LGBTQ+ flags is on anyone’s agenda full stop – let alone during a pandemic where college support is otherwise largely not forthcoming apparently because of strapped time and resources.

“EU flags were flying from several of the same properties for periods of at least 12 months+ with not a word. The LGBTQ+ flag has been singled out.”

Shaughnessy also addressed the email online in a Twitter thread and explained the situation further.

“For the sake of my mentions: this is Jesus College Cambridge, University of Cambridge,” he wrote. “We have been told the policy is no flags however the college have never taken issue with the other flags before to my knowledge.”

Shaughnessy also added: “It is particularly troubling that during the pandemic where support from the college is largely not forthcoming, time spent singularly to curb LGBTQ+ expression is on anyone’s agenda. We are very suspicious.

“Cambridge College’s are extraterritorial and treat houses they own around the city as sovereign extensions of their buildings, for those confused by why they even believe themselves to have a right to tell people what to hang in their bedroom windows.”

that's quite enough gay for one year pic.twitter.com/rvU1hy7X13

The email stated the request to remove flags and banners was due to on-going contractual issues.

The email said: “College concerns were about these flags violating a clause in the Tenancy agreement which forbids students to fly any items from outside their windows; those concerns are about safety and maintenance related issues.”

A spokesperson for Jesus College defended the request to remove flags.

The statement outlined that students are allowed students to display pride flags during February by “waiv[ing] the section of a standard room license agreement which prohibits any flags to be flown for safety and maintenance reasons.”

The statemented emphasised that “Jesus College is very supportive of LGBT+ History Month and other LGBT+ events and initiatives throughout the year”.

The Jesus College spokesperson added while they hope students enjoyed celebrating LGBTQ+ History Month, they were reminded that all “flags needed to be taken down.”