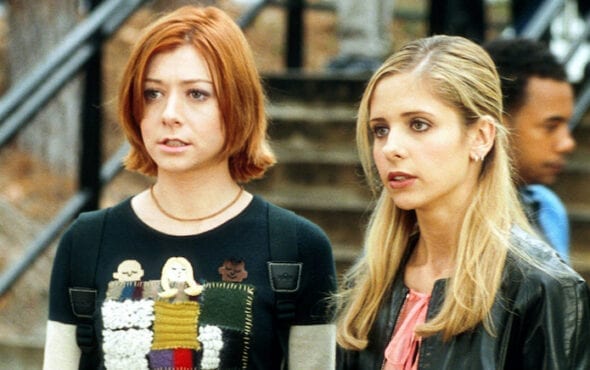 Angel who? Spike who? RILEY WHO?

Ever since Buffy conquered our screens from 1997-2003, there’s been an ongoing debate within the fandom about who the best romantic partner was for the titular vampire slayer – memorably played by Sarah Michelle Gellar.

Last week, Democratic voting-rights champion Stacey Abrams took a break from enacting political change to share her thoughts on the beloved fantasy drama, where she weighed in on the Angel vs Spike debate.

“To be fair, Angel was the right boyfriend for Buffy coming into her power,” she replied to a Twitter thread. “Spike was the right man to be with as she became the power.”

Her comments went viral and earned the attention of Alyson Hannigan, who played the show’s resident witch and Buffy’s best friend, Willow Rosenberg. The character’s same-sex romance with Tara McClay (Amber Benson) made history as the first long-term lesbian relationship on U.S. television.

“Actually Buffy should have dated Willow,” she tweeted, earning nearly 50,000 likes. However, her opinion was met with a mixed response from fans, with some welcoming the pairing and others defending her romance with Tara.

One fan said a relationship “would have ruined their friendship,” to which Hannigan responded: “That’s what @AnthonySHead told me when @AlexisDenisof and I were thinking about dating 20 years ago! #stillfriends.”

Actually Buffy should have dated Willow.

Although Buffy only explored heterosexual relationships throughout the series, the character is canonically queer.

In a 2008 interview with TV Guide, Gellar was informed about Buffy’s queer journey in the comics.

“This is literally news to me, I had no idea!” she said. “I asked if she was with Willow and they said no. Is she experimenting? I feel badly, shouldn’t it have been with Willow?”

In 2018, it was confirmed that a reboot of the widely-acclaimed series – with a “black Buffy” – was in the works from Fringe writer Monica Owusu-Breen and original series creator Joss Whedon.

The news received a polarised reception from fans and former cast members. Gellar said in an interview with PureWow: “Buffy was the story of the horrors of adolescence manifested through literal demons, and I think that was the beauty of it.

“Reboots are great when they’re introducing a new generation to something they haven’t seen before. But, to me, when you have a show that holds up and is still affecting people and still holds that level of importance, I’m not really sure you need a reboot. For me, it doesn’t work.”

Owusu Breen later confirmed that it’ll be a revival instead of a full-blown reboot, tweeting: “For some genre writers it’s Star Wars. Buffy the Vampire Slayer is my Star Wars.

We recently rounded up some of Buffy the Vampire Slayer’s queerest moments – check it out here.