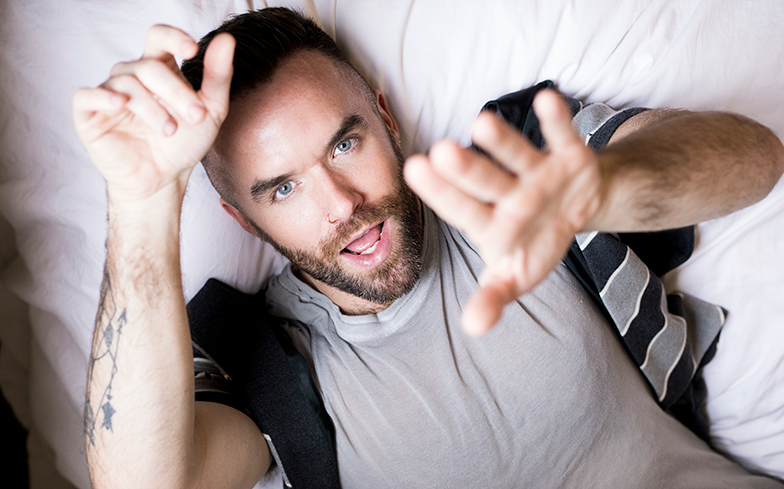 Three years ago, Brian Justin Crum stunned US audiences when he made his debut on the 11th season of America’s Got Talent, landing in fourth place. During his time on the series, Brian received acclaim for performances of songs such as Somebody to Love, Creep and In the Air Tonight, which is why they’ve invited him back for the show’s all-star series, The Champions.

“I look at Champions as an opportunity to share another piece of myself with the world, to utilize an incredible opportunity to be heard,” he tells us. “I think its incredibly important that we show LGBTQ people from all walks of life, from different experiences. I want to show the world my most authentic self.”

In celebration of the show’s premiere, we spoke with the American performer about his responsibility as an openly gay man on one of the world’s biggest reality competitions, and how television shows can help support queer people better.

When did you realise you wanted to be a musician?
I was eight or nine years old when the love of music really struck my soul. I grew performing in local theatre groups in San Diego. I was an extremely passionate and flamboyant little boy, and music and theatre gave me the perfect outlet to express all the feelings inside me that I didn’t quite understand yet. It also became an escape for me. I don’t really remember ever not wanting to be in music. Who were your main influences growing up?
My dad has of the largest vinyl collections I’ve ever seen. I always loved listening to Barbra Streisand and Judy Garland. I know… I also found myself extremely drawn to Whitney Houston and Celine Dion. I always loved big, powerful voices. I swear I could feel them even through a record. I also had a crush of George Michael. Not to mention my unhealthy obsession with Britney Spears and NSYNC. I was a child of the 90s what can I say?

Whose career would you like to emulate?
I find Lady Gaga’s career to be extremely inspiring. I come from a theatre background and have studied acting and I’ve performed on Broadway many times. I think society is obsessed with putting people in boxes and the idea that people are entertainers is confusing. She does it all. I do it all. I would love to be able to entertain across the board in all mediums.

You last competed on America’s Got Talent in 2016 – what are you going to bring to the competition this time around?
Competition shows love a story… I’m really proud that I got to share the story of my growing up experience and that it resonated with so many people. There was a lot left out though, such as the eight years I spent performing on Broadway and touring. This time around I’m really going back to my roots and showcasing a different side of myself musically. I feel that my performances on Champions are more authentic to who I am and where I am in my life.

This is America’s Got Talent: The Champions, do you feel pressure to be competing against the franchise’s most iconic contestants?
I don’t move through the world looking at my ‘competition’ maybe even to a downfall. This show isn’t about beating other people for me. We all do very different things. We have very different skill sets. I look at Champions as an opportunity to share another piece of myself with the world, to utilize an incredible opportunity to be heard. Do you feel a responsibility as an openly gay man on one of the biggest shows in the world?
Absolutely and I take it seriously. I think it’s incredibly important that we show LGBTQ people from all walks of life, from different experiences. I want to show the world my most authentic self and to expose myself to a group of people that might not know any gay people. The more we are seen, the more we can be understood. I feel so strongly that queer people, especially queer people of color, need to be given the opportunity to give their gifts to the world. We need a platform to be celebrated. Pop culture has borrowed the creations of queer people since the dawn of time and it’s time that the people creating get to be in the spotlight for their work.

Do you think openly LGBTQ artists on shows like Got Talent face a harder battle to win?
I do. These competition shows appeal to a certain demographic, an audience that can’t seem to fully get behind LGBTQ contestants. I think it’s a big step that America’s Got Talent chose to tell my story and that they chose to tell it honestly. My Creep performance, in which my mother described her experience watching me grow up, and when she recalled people calling me faggot as I walked down the halls, and the pain it caused her, is incredibly moving. I think it was a lot of people’s first time hearing it from a mother’s perspective. These stories are important to tell, even if it means not ‘winning’. I feel like I won the whole damn thing.

How can television shows like this help support queer people better?
By telling our stories. I benefit greatly from being a cisgendered white male in this world. My story is easier to digest for many people, but it’s a step. I’m looking forward to seeing more queer stories being told. Queer people of colour need the same opportunity to share their stories as I do.

America’s Got Talent: The Champions airs Mondays in the United States on NBC.