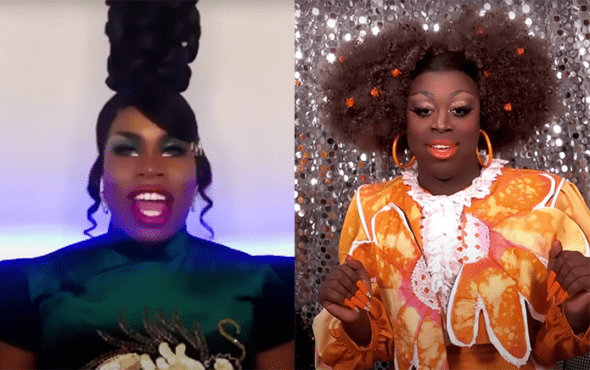 Bob the Drag Queen and Monét X Change have discussed their strategies for a potential Drag Race winners season.

Cracker, who ultimately earned her third maxi-challenge win of the season, chose to eliminate her season 10 sister Blair based on her “report card” rather than a competitor who could beat her to the crown – a decision Monét doesn’t agree with.

“I’m that girl. If I was Cracker, I would absolutely choose Shea’s lipstick,” admitted Monét. “Shea is the only thing standing between me and the crown and the money. I would absolutely. I’m choosing Shea and I’m sending her home honey.”

Monét’s comments prompted Bob to ask if she’d send her packin’ on that much-rumoured Drag Race winners season. The All Stars 4 winner then raised a lipstick with Bob’s name on it. Shade? So real.

“That is so rude,” responded Bob. “I’m being honest with you, I have thought very long and hard about this. I honestly don’t know if I could send you home. Being on Drag Race is the most emotional thing I’ve ever done in my life.

“Bitch, I had basically just met Acid Betty and when she got eliminated, I was balling. I was crying so hard, Acid Betty had to stop production and be like, ‘Bob, stop. This is insane.’ If I was there with you on ‘Drag Race Superstars’ and someone sent you home, I would wreck them.”

Monét joked that she does not feel the same way and would send Bob’s “Black ass home”.

13 stars you didn’t know were pansexual

The final episode of Drag Race All Stars 5 airs tonight in the United States on VH1 and tomorrow in the UK on Netflix.

For their final maxi-challenge, the top three will write, record and perform a new verse for RuPaul’s new single, Clap Back, and one queen will join Chad Michaels, Alaska, Trixie Mattel, Monét and Trinity the Tuck in the Drag Race Hall of Fame.

The seven eliminated queens will also ruturn to spill the T on the dramatic events of the season, including Ongina and Mayhem’s self-eliminations and the feud between Alexis Mateo and India Ferrah.

All seven episodes of RuPaul’s Drag Race All Stars 5 are now available to stream in the UK on Netflix.