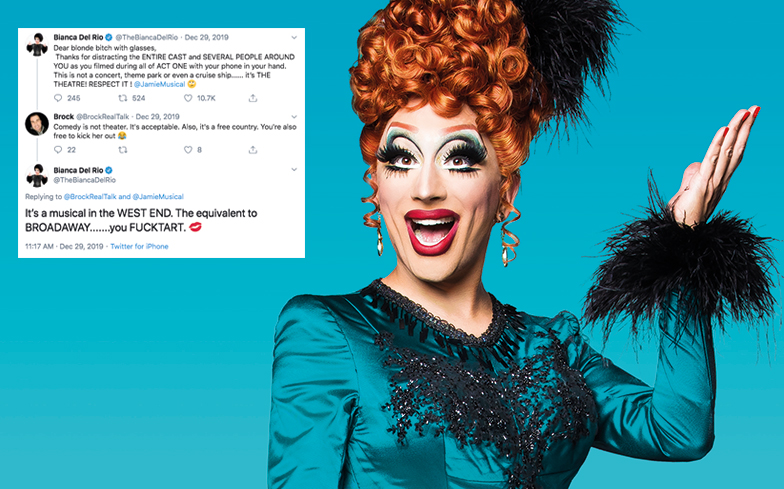 Bianca Del Rio has slammed a theatregoer for filming a show on their phone.

The RuPaul’s Drag Race champion is currently starring as Loco Chanelle in West End musical Everybody’s Talking About Jamie, which tells the real-life story of a high school teenager who wants to go to prom dressed in drag.

When an audience member decided to film a large part of the show at the Apollo Theatre on their mobile phone, Bianca took to Twitter to call them out – and in true Bianca style, she did not hold back.

“Dear blonde bitch with glasses, thanks for distracting the ENTIRE CAST and SEVERAL PEOPLE AROUND YOU as you filmed during all of ACT ONE with your phone in your hand,” she wrote.

“This is not a concert, theme park or even a cruise ship… it’s THE THEATRE! RESPECT IT!”

When a fellow Twitter user argued that it was “acceptable” to do so because “comedy is not theatre” and “it’s a free country”, Bianca replied: “It’s a musical in the WEST END. The equivalent to BROADWAY… you FUCKTART.”

When we spoke to Bianca about their role in the musical, she said she was attracted to the show because it’s “educating without being preachy”.

“If you’re a straight person, your image of what gay life is about may be a bit different than what it really is. This shows the human side of it, it shows someone who is balancing his relationships with his father and also his mother, who is very accepting and loving, and he just happens to want to be a drag queen,” he said.

“When I’ve spoken with my gay friends who’ve watched the show, we’ve all had that type of mother that’s in the show, or we wish we had that mother. So when the mother is doing her song [He’s My Boy], you can’t help but cry.