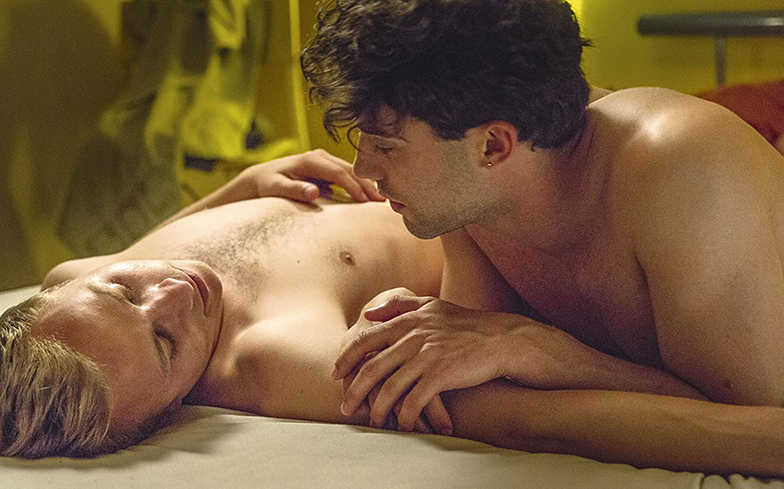 Need some good queer viewing while you self-isolate? Don’t worry, we’ve got you.

We’ve rounded up 14 of the best LGBTQ films that you can watch right now on NOW TV in the UK, from tender romances like A Moment In The Reeds and Sorry Angel to big name stars in Bohemian Rhapsody and The Favourite.

These are the films that will help you feel emotions again – and stop you from pulling your hair out from boredom – as we wait out the coronavirus pandemic. Grab some popcorn, fill up your glass and press play.

This queer Finnish romantic drama follows Leevi (Janne Puustinen), who’s studying in Paris, as he returns to his home country for the summer to help his estranged conservative father renovate the family lake so it can be sold. There, he meets Tareq (Boodi Kabbani), a Syrian asylum seeker and architect by profession who has been hired to help out with the project. When Leevi’s father returns to town on business, the two men get to know each other through their only common language, English, and form a passionate bond over the idyllic Finnish midsummer.

After breaking up with her girlfriend, Brooklyn musician Becks moves back to her childhood home in Missouri with her devoutly Catholic mother Ann (Christine Lahti). While there, she rediscovers her musical voice through an unlikely friendship with her former high school boyfriend Dave (Dan Fogler), and begins a secret romance with bored housewife Elyse (Mean Suvari). The musical-drama film also stars queer pop icon Hayley Kiyoko.

Simon Amstell’s bittersweet debut feature film Benjamin tells the struggles of an up-and-coming filmmaker (Colin Morgan) as he’s thrown into turmoil by the arrival of a new romance with a visiting French music student (Jack Rowan) and the premiere of his second big-screen feature. The film also features original music from James Righton, former member of the Klaxons.

When it was announced that the long-delayed biopic of legendary rock band Queen and their iconic frontman Freddie Mercury would finally be made, fans were naturally concerned over whether the film would get everything right. Fortunately, for the most part, the film delivered on its promise. Some criticised the way Freddie’s sexuality was presented – we even took a deep dive into this ourselves – and were disappointed that the film wasn’t a warts-and-all look into the life of Freddie. But then, realistically, it never was going to be that. What it does do is provide a damn good time for viewers and fans of Queen’s legacy, and remind the world that an unapologetically queer person of colour is responsible for some of the most beloved music in history. It became the highest-grossing biopic with a worldwide box office total of over 900 million, therefore securing its place as the most financially-successful LGBTQ film of all time.

Based on Garrard Conley’s memoir of the same name, Boy Erased tells the story of Jared (Lucas Hedges) – the son of a Baptist pastor – who is outed to his parents (Nicole Kidman and Russell Crowe), and forced to attend a conversion therapy program. Once there, Jared meets others like him and comes into conflict with the homophobic head therapist (Joel Edgerton). Boy Erased also stars Cherry Jones, Xavier Dolan, Flea, Joe Alwyn and Troye Sivan. Come for Nicole Kidman’s wigs, stay for the powerful drama.

The heartbreaking Boys Don’t Cry is based on the real-life story of Brandon Teena (Hilary Swank), an American trans man who moved to Nebraska to find his identity – where he also fell in love with Lana (Chloë Sevigny) – but ended up being brutally raped and murdered by two men in a transphobic hate crime. Swank won an Academy Award for her portrayal of Teena, while Sevigny was nominated. Like The Danish Girl, Boys Don’t Cry was complicit in the trend of casting cisgender actors in trans roles, but given the year it was released (1999), and the amount of awareness it raised for trans people and the discrimination they face, it’s something viewers may be willing to overlook.

Based on the confessional memoirs of the same name, Can You Ever Forgive Me? tells the real-life story of Lee Israel, an author who attempted to revitalise her failing writing career by forging letters from deceased authors and playwrights including Noël Coward and Dorothy Parker. Both stars, Melissa McCarthy and Richard E. Grant, received Academy Award and Golden Globe nominations for their roles.

Set in 1982, the movie retells the true story of Lizzie Borden (Chloë Sevigny), who was accused and eventually acquitted of the axe murders of her father and stepmother in Fall River, Massachusetts. The murder mystery has remained a staple in American pop culture mythology, but the story becomes even more intriguing with the introduction of maid Bridget Sullivan (Kristen Stewart), who some theorists claim developed an intimate relationship with Lizzie – a relationship which is fully-realised in this film.

As the debate about the lack of openly gay professional male footballers continues, this Swiss film explores the reasons why some players may choose to remain in the closet. Mario (Max Hubacher) is his team’s star player, but his life begins to spiral with the arrival of German striker Leon (Aaron Altaras) and the chemistry both on and off the pitch is undeniable. The two share a flat, and eventually form a romantic relationship – but anxiety begins to set in as they attempt to hide their love from teammates, managers, agents and fans who feel there is a “certain image” that needs to be maintained in the world of men’s football.

With star turns from Saoirse Ronan as Mary Stuart and Margot Robbie as Elizabeth I, two fierce royal figures in a male-dominated world, period drama Mary Queen of Scots had all the makings of a gay favourite as it was. But the true story of betrayal and rebellion – and plenty of fancy costumes – has been given a modern update with the inclusion of queer characters, including Mary’s confidant David Rizzio, portrayed by Ismael Cruz Cordova, and his relationship with Lord Darnley, played by Jack Lowden.

Tom Hanks earned his first of two Academy Awards for his performance in Philadelphia as Andrew “Andy” Beckett, a closeted gay man who hides his AIDS status from his co-workers at a prestigious corporate law firm. The film is noted for being one of the first mainstream Hollywood films to acknowledge HIV/AIDS, homosexuality, and homophobia. It was a huge box office success, grossing over 200 million. Adjusted for inflation, it would rank as the second highest-grossing LGBTQ film in history.

The emotional French drama Sorry Angel follows successful writer and single father Jacques (Pierre Deladonchamps) as he begins a romance with young aspiring filmmaker Arthur (Vincent Lacoste) after the two meet at a film festival in Rennes. Jacques’ is hesitant to get too attached, largely because his health is in the early stages of AIDS-related deterioration, but that can’t stop their feelings for one another.

Set in the early 18th century as England and France are at war, the film follows the life of ailing UK royal Queen Anne (Olivia Colman) and her closest friend Lady Sarah (Rachel Weisz) who governs the country in her stead. But the arrival of Sarah’s cousin Abigail Masham (Emma Stone), who’s fallen on hard times, promises chaos in the monarchy as the two women begin to fight for their place as Queen Anne’s right-hand woman and companion. The film received universal acclaim and was nominated for ten Oscars at the 91st Academy Awards – including Best Picture.

Canadian comedy-drama Venus follows Sid (Debargo Sanyal), a woman who is just beginning to come out as transgender, as her life is turned upside down when a 14-year-old boy named Ralph (Jamie Mayers) arrives at her door with the surprising announcement that he is her son. This is definitely a film to lift your spirits.