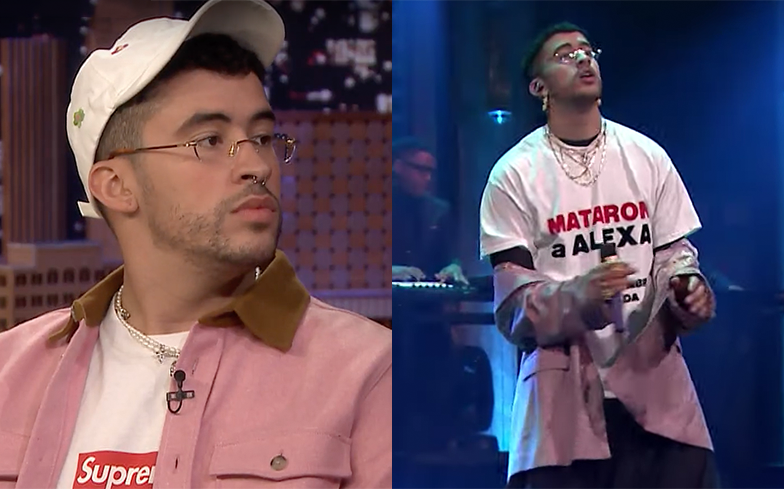 “They killed Alexa, not a man with a skirt.”

Bad Bunny has called attention to the death of Alexa, a trans woman who was recently murdered in Puerto Rico.

The Latin singer and rapper made an appearance on The Tonight Show Starring Jimmy Fallon to perform his new single Ignorantes and to promote his upcoming third studio album, Yo Hago Lo Que Me Da La Gana.

During his performance with special guest star Sech, the rapper – who has been a vocal ally to the LGBTQ community in the past – wore a skirt and a sweater that read, “They killed Alexa, not a man with a skirt.”

Alexa was killed in a park in Toa Baja, a city around 15 miles west of capital San Juan, early on Monday (23 February).

David Begnaud of CBS News reported that police responded to social media accusations that Alexa was “peeping on people” in a public bathroom. Police found no proof and the complainant didn’t file charges after finding out Alexa was homeless.

However, he says “a narrative spread on social media” about her.

Alexa was reportedly killed nine hours after the accusations were made, and local news outlets have reported that her murder was captured on video and shared on social media. The murder hasn’t been classified as a hate crime yet.

Pedro Julio Serrano, founder of LGBTQ charity Puerto Rico Para Tod@s, told the Washington Blade in a statement: “We don’t know all the details yet, but she was harassed, hunted and brutally killed.

“There’s no doubt that transphobia and intolerance had much to do in this case.”

Watch Bad Bunny’s powerful tribute to Alexa on The Tonight Show With Jimmy Fallon below.