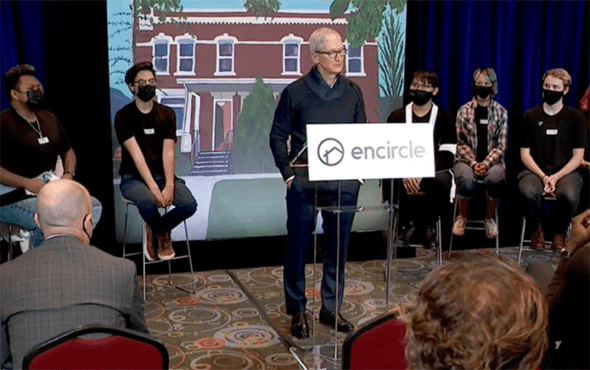 The non-profit organisation sought to raise $8 million to build eight new homes across the US.

On Wednesday (October 13), Encircle announced their target fundraising goal has been reached.

The founder and CEO of Domo and his wife, Josh and Marina James, also donated $1 million to further Encircle’s total.

The Kahlert Foundation, which was established in 1991, also donated $1 million. The additional funding has enabled Encircle to build a ninth home in Salt Lake County.

“Encircle’s mission is very personal to me because I see myself in so many of these young people,” Cook told reporters at a press briefing.

“It’s not easy when you’re made to feel different or less than because of who you are or who you love. It’s a feeling that so many LGBTQ people know far too well.”

Wade, a part-owner of the basketball team Utah Jazz, shared his experience as the parent of a transgender child (Zaya Wade) and vocally backed Encircle’s funding goal.

“I stand here as a proud parent of a beautiful daughter that’s a part of the LGBT-plus community,” Wade said. “I don’t have all the answers. I don’t know everything, but I’m willing to listen.”

Utah Gov. Spencer Cox also acknowledged the impact of Encircle’s efforts: “What Encircle has done is provided that piece of acceptance, even if – especially if – there is no acceptance anywhere else,” he said. “There is a place where they can go where they can feel loved.”

Apple CEO Tim Cook is in Utah today speaking about his support of Encircle at Silicon Slopes pic.twitter.com/L9OWZgc1ba