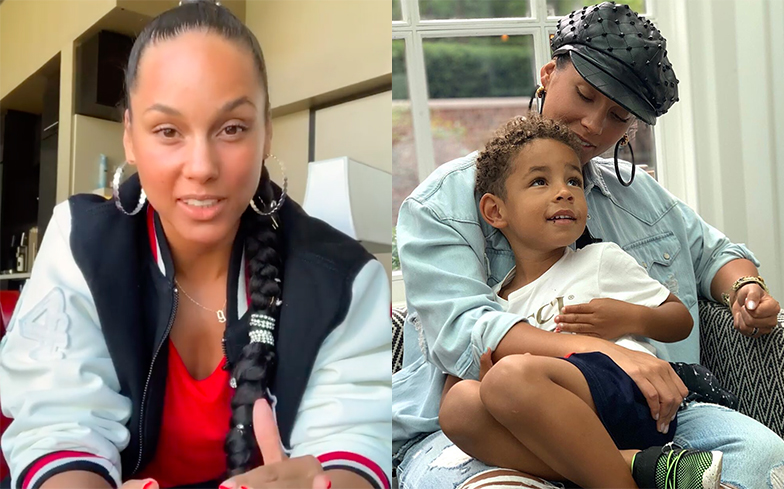 Alicia Keys is the mother we all deserve.

Over the weekend, the Grammy Award-winning singer-songwriter took to Instagram to open up about her frustrations with labels and lack of freedom of expression after she took her four-year-old son Genesis to a nail salon.

“The other day I went to the nail salon with Genesis, he’s in the chair and he tells the lady he wants rainbow colours on his nails, and she brings all of these colours and paints each nail a different colour,” she recalled in the video.

“And after he painted his nails he looked at me and said, ‘Mommy, I don’t want this on my nails’, and I was like, ‘Why? You were so sure!’ And he was like, ‘People are not gonna like it’.

“Can you believe this? He is four years old, and he already understands the concept that someone’s going to judge him because he chose rainbow colour on his nails.”

Alicia went on to explain how she told him that no one would judge him for having painted nails, and it would only show off how “creative” and “cool” he is – and that he shouldn’t care what other people think anyway.

“I said, ‘Plus, a lot of guys paint their nails, this is not some strange thing only you do’. He was like, ‘Really?’ And that made him feel better, but it got me to thinking how completely judged we are all the time,” she continued.

“The way I see it, there are masculine and feminine energies inside us all, and that’s period. It gets concerning to me that we can’t just explore these different sides and energies that are within us.

“Even for me myself, I oftentimes express the masculine energy that’s inside me, it’s very natural to me, and all the time if that happens there’s judgements and stereotypes, and for my boys it’s similar if they want to express the feminine energy inside them.”

Alicia said it was “very frustrating” to her that people try to stop others from expressing masculine and feminine qualities, and questioned why people aren’t allowed to be themselves.

“This is a very normal, ancient, powerful, spiritual understanding that we all have masculine and feminine energies,” she concluded. “We should be able to explore and express them however we want to.”

The post received thousands of supportive comments, including from fellow R&B singer Melanie Fiona, who said: “This parenting. This thinking. THIS is the stuff that will change the world. For the better.”

Alicia’s husband, producer Swizz Beatz, also showed his support writing: “He’s a young King and he can explore and express his creativity at anytime! We support it as his parents.”