Alexis Stone is a masterclass in achieving superstardom without Drag Race 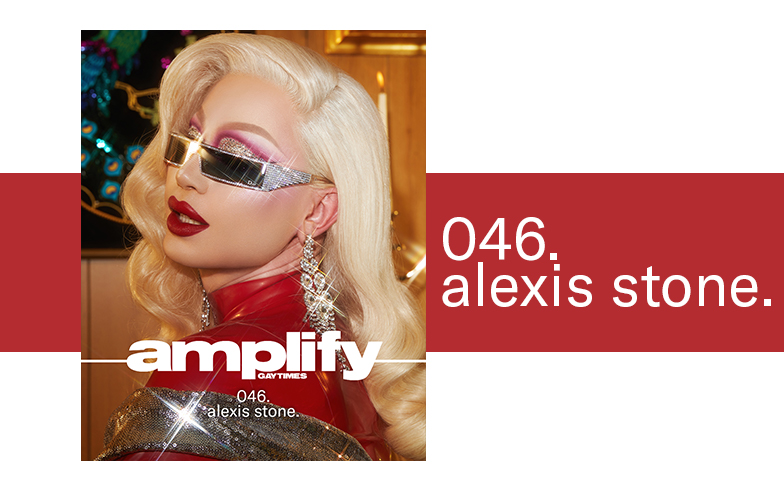 “I’m always expected to act as this PG Disney queen who opens my window singing to my adoring fans with them being the reason I wake every morning,” says Alexis Stone.

“But the reality is, I’m not. I’m not that person and I’m never going to be that person.” If you’re a queer who has access to ze internet, then you’ve probably heard of Alexis. Over the past decade, the British performer has established herself as one of the most notorious and boundary-pushing artists in the industry thanks to her makeup skills, extraordinary illusions of celebrities and for popping the lid on society’s perceptions of beauty with her (unintentional) ’social experiments’. This year, she launched a makeup line with Revolution, becoming one of the first drag queens in HERstory to collaborate with a major makeup brand (without the assistance of RuPaul’s Drag Race). She’s a prime example of a modern drag queen who has managed to propel herself into superstardom without having to sashay and shantay into an Emmy Award-winning werkroom to win a lifetime supply of MAC Cosmetics and $100,000 ‘doollahz’. “It is very hard to make it to the same level or beyond the level of those who have been on the show,” she admits. “It’s not meant to be easy, it took endless nights, it took… all of this.”

Alexis has always been a creative whiz. Although her past feels “very blurred” – which she blames on “amnesia or a selective memory” – Alexis remembers finding creativity through a “queer” and inclusive home environment. “Me and my twin brother were so identical that my mother used to paint his fingernails blue and mine pink, so I think it was institutionalised from the very beginning,” she recalls. “When I played dress-up and decided which character in Lord of the Rings I wanted to be, I would always be the female elf.” Just like a large proportion of gay men, Alexis would resonate with powerful female characters on-screen, but she jokes that she doesn’t know whether that was down to her sexuality or “just an admiration for sparkly shit”. And for her Christmas presents, Alexis would ask for dresses and wigs, which she wouldn’t think twice about thanks to her mother’s liberal values. It was normal in her household, as it should be, for a child to express both masculine and feminine traits; however, she was met with resistance from “other grown adults” who told Alexis that it wasn’t “right”. Thankfully, her mother was there to fight in her corner. “The biggest blessing in my life is having a mother that supports me in any context, whether that’s my sexuality, my expression or these crazy work ventures that I have,” she adds.

On the same day she received her GCSE results, a 16-year-old Alexis relocated to London to pursue a career in the fashion industry. “I wanted to be a fashion designer and I didn’t need any results telling me what I was and wasn’t going to do,” she admits. Alexis had her first taste of success on her 17th birthday when she was flown out to Turkey with L Magazine with other emerging designers, where she showcased a “shocking, and very visually triggering collection”. Alexis received praise for her work but ran into trouble with Turkish officers for wearing a “gimp mask”. But… silver lining. The attention from her arrest caught the eye of fashion icons such as Nicola Formichetti and Lady Gaga, leading to multiple collaborations with musicians and fellow designers. However, living independently took its toll on Alexis, who ended up in rehab. “London is an incredibly isolating place because you work six or seven days a week to afford the bare minimum,” she explains. “Doing that as an adult is hard anyway, but doing that as a 16-year-old kid in a big city, being co-dependent, emotionally unstable and all the above… it drove me insane.”

After moving to Manchester, Alexis garnered a passionate following on social media after uploading jaw-dropping metamorphosizes in which she transforms into celebrities such as Lana Del Rey, Lady Gaga, Angelina Jolie, Kylie Jenner and Kevin McAllister from Home Alone. Y’know, gay icons. As of January 2020, she boasts over 845,000 followers on Instagram (more than most Drag Race contestants), a number that was significantly boosted after her first project – dubbed a ‘social experiment’ by the media – went viral. In 2018, Alexis uploaded a dramatic surgical makeover akin to American socialite and model Jocelyn Wildenstein – Alexis’ idol – who is best known for her extensive cosmetic surgery. “I believe what Jocelyn does is monumental,” says Alexis. “She pushes the boundaries, whether they are right or wrong.” But on 1 January 2019 – after seven months – Alexis revealed that the transformation was a Mrs Doubtfire-esque ruse, a mask created by award-winning artist David Marti; the vision behind prosthetics on big-budget movies such as Hellboy and Pan’s Labyrinth. “There was no angle where I went into it thinking it was going to be a ‘social experiment’. I wanted to reinvent myself in a way where I could take a step back away from the most toxic thing in my life, which is social media, focus on sorting myself out, my health, my sobriety, and to demonstrate what I’m all about,” Alexis told us at the time. “This project started off as a very narcissistic angry ‘fuck you’ to the world and it ended up breaking a lot of boxes surrounding beauty and how we perceive other people’s happiness. If we can’t be entertained by a crazy crossdresser living his Mrs Doubtfire fantasy for seven months, we’re gonna go insane.”

Alexis received her fair share of online abuse, being labelled a “botched monster” by trolls, losing major brand partnerships and even being detained by authorities on suspicions of terrorism. “The same comments I got with the mask I still get today, that I’m botched, that I’ve got a plumped-up face,” she reveals. However, the project received universal praise from the media and was hailed as a commentary on beauty standards in modern society. “The project broke me ten times over, but it’s made me who I am today. I still get recognised for it, and I think it is something that will hopefully live on past me.” Back in July, Alexis uploaded a sequel, of sorts, when she unveiled a four-month long stunt called The Replicant, where she created a replica of her face and used it every time she uploaded a photo or video to Instagram. Months went by and no one clocked that it was a prosthetic, which begged the question: is anyone really paying attention? “It raises more questions than answers,” she tells us. “I just didn’t want to do my makeup anymore. I feel like, especially with Instagram, you really can’t get people’s attention unless you tear your face up or smash your face in with an axe. I just think it’s become Black Mirror, we spend our whole day swiping.”

Although she may not want to beat her own mug anymore, Alexis does, however, want to make her fans feel sickening. In September, she launched a groundbreaking collection with Revolution, becoming one of the only drag performers in history to collaborate with a makeup brand. “The only drag queens to have achieved that before RuPaul’s Drag Race were people like RuPaul or trans icons like Amanda Lepore,” she explains. “It is monumental, and it might not seem that monumental in the online world as every Dick, Tom and Bobby can make a collaboration, but it’s something that I never thought in a million years would come to life.” Alexis says it sets a precedent for gender non-conforming people who could also be in “every Superdrug across the States and the UK, alongside these incredibly beautiful cis-gendered females”. It’s proof that drag queens can stand on their own two heels without the help of RuPaul’s Drag Race. Of course, the series has helped propel the art-form into an Emmy-winning cultural phenomenon, but it’s difficult to name any queen with 800k + Instagram followers who hasn’t lip-synced for their life (or legacy). But even though she’s proven herself time after time, she’s still not perceived as a success in the world of Drag Race stans. “It still happens to me when I go and see my girls who have been on the show and support them,” Alexis reveals. “There are times that people who don’t know who I am, or don’t recognise my work, and tell me to audition for the show. I think it’s a different world, the Drag Race fans are dedicated to the show, and my fans are dedicated to my journey, it doesn’t take away from any of the artistry. If it was easy then there’d be more than 150 famous RuPaul Drag Race queens, there’d be a million.”

So what advice would Alexis have for fellow drag performers who can’t – or don’t want to – appear on the show? “Just have some integrity, stay true to yourself, be refined and submerge yourself in the community. Don’t conform, what you’re doing is right,” she states passionately. “There’s no right or wrong way of doing it. It’s taken me years to get to where I am now. Yes, it was a very quick and overwhelming growth overnight, but just be different, give something to the world that needs to be given, and it will take you a long way.” With two critically-acclaimed ‘social experiments’ and a partnership with one of the biggest makeup brands in the world, it will be hard for Alexis to top 2019. But as you’ve gathered from our interview, this “botched monster” doesn’t give up easily. Alexis describes her 2020 as “monumental” (which appears to be her favourite word) and teases a back-to-basics kind of year. “Everything I do evokes emotion, whether it’s something like the mask or simply going into a group chat and asking among friends what I’m doing,” she teases. “2020, I’m done doing what the kids want. It’s time to go back to my roots and showcase what I do best.” Whatever the hell she does, stay tuned: we’re sure it’s going to be revolution-ary.