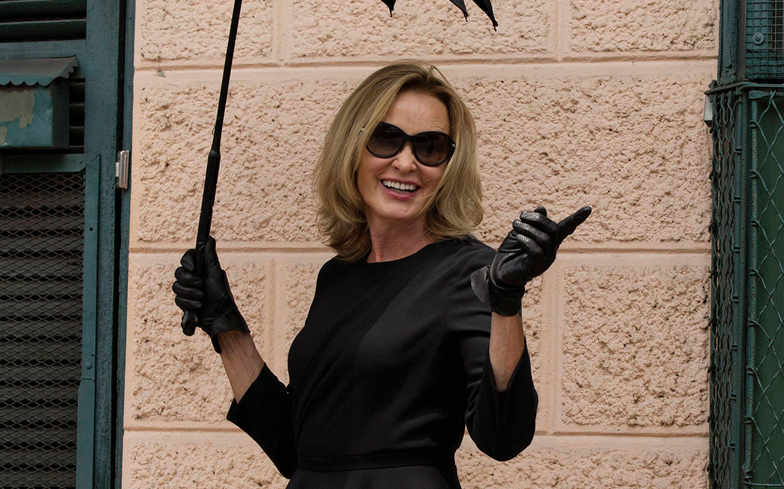 Although the show’s current ninth season, 1984, has become one of American Horror Story’s most praised instalments to date, there’s been much criticism from fans because of the lack of original cast members (Paulson and Peters).

Earlier this month, series creator Ryan Murphy said he can see the show continuing for at least another decade, while Paulson revealed that she’ll return to the acclaimed horror anthology series if Peters follows suit.

While we ponder over what horror trope will be explored in the show’s 10th season – which will air next year – we present 12 legendary stars from American Horror Story’s past who need to return.

American actress Adina Porter first appeared in the show’s debut season for one episode, but made a greater impression on audiences when she starred as the real Lee Harris in Roanoke. For her role as Beverley Hope in the seventh season, Cult, she earned a Primetime Emmy Award nomination for Outstanding Supporting Actress in a Limited Series or Movie. It wasn’t until the most recent instalment, Apocalypse, that she was promoted to main cast member. If Ryan Murphy is smart, he’ll bring her back for the tenth season because she’s undoubtedly one of the most versatile stars in the franchise.

Angela Bassett made her American Horror Story debut in the show’s third season as Marie Laveau, the mighty high priestess of voodoo magic and the sworn enemy of Jessica Lange’s character Fiona Goode. She followed it up with appearances in the fourth, fifth and sixth seasons, and reprised her role as Laveau for the gag-worthy finale of Apocalypse. The Academy Award nominated actress manages to steal every scene she’s in, and she’s previously expressed disappointment towards Ryan Murphy for not having a larger role in Apocalypse, so we can see her making a major comeback next year.

Billy on the Street comedian Billy Eichner showed off his dramatic chops in the seventh season when he portrayed the psychopathic member of Kai Anderson’s (Evan Peters) cult, and later embodied the infamous murderer Tex Watson for one episode. He returned in Apocalypse as Brock, a deformed, murdering lunatic, and Mutt Nutter, a member of the Co-Operative who sold his soul to Satan. When we spoke to Billy for our January issue, he said he wants to continue working with Ryan Murphy, but alluded to wanting to work on other projects. “I do have some other things on my plate, I am ultimately a comedy guy, and I am doing a comedy special for Netflix, I have The Lion King, I’m writing a couple of movies,” he told us. “There are some other things I wanna do, so we’ll see how it all plays out.”

American entertainer Billy Porter may have only appeared in one season of American Horror Story, but he made a massive impression on fans due to his character’s chemistry with fellow co-star Emma Roberts. We’re still waiting on confirmation of that Behold and Madison spin-off… We know Porter is busy with Murphy’s other acclaimed series, Pose – for which he became the first openly gay black man to win the Primetime Emmy Award for Best Actor – but surely one episode is not out of the question?

We last saw Denis O’Hare in the show’s critically-acclaimed sixth season Roanoke as Dr. Elias Cunningham and William Van Henderson. Before that, he earned two Primetime Emmy nominations for his performances in the first and fourth season, and received universal acclaim for his portrayal of transgender woman Liz Taylor in Hotel. O’Hare is one of the most versatile stars in the show’s history, and his presence was sorely missed in Cult, Apocalypse and 1984, so we would love to see him return in some form.

Earlier this year, Evan Peters revealed that he wasn’t returning to the series for its ninth season, telling GQ that he wanted to take a “sabbatical” to focus on other endeavours because the show had taken an emotional toll on his mental health. “It’s been all a massive stretch for me and really difficult to do,” he explained. “It’s hurting my soul and Evan as a person.” However, he recently celebrated the show’s milestone 100th episode at the Hollywood Forever Cemetery with several other cast members, including Sarah Paulson and series creator Ryan Murphy, so he’s not entirely done with the franchise…

Imagine a world where Frances Conroy wasn’t in American Horror Story? We’d be deprived of some of the most classic one-liners, memes and gifs, mostly from her season three character, Myrtle Snow, who is one of the best characters in all eight seasons of the show. She could just stand there for an entire season with no lines and we’d be enthralled. The only season of the show she hasn’t appeared in so far has been Hotel and 1984, and we’d like to keep it that way. Frances Conroy for season 10!

Do we even need to explain why? Jessica Lange is American Horror Story. She’s the OG. No one can even come close. Lady Gaga replaced the two-time Oscar winning actress in the fifth season and delivered a stellar performance, but it just wasn’t the same. She returned in a limited capacity for Apocalypse as her debut character, Constance Langdon, and surprise surprise… it was one of the best seasons to date. The announcement of her comeback also broke the internet – can you imagine how fans would react if she returned full-time? We have goosebumps just thinking about it.

Academy Award winning actress Kathy Bates joined American Horror Story in Coven as the loathsome Delphine LaLaurie, the real-life New Orleans socialite from the 1830s who was infamous for killing and torturing slaves. For her performance, she won the Primetime Emmy Award for Outstanding Supporting Actress in a Miniseries or a Movie. She returned for four more seasons and stunned audiences with each character, because they were all so far removed from each other, especially The Butcher in Roanoke, one of the most sociopathic characters in the series to date. We don’t want American Horror Story without her.

Misty Day is one of the most loveable, wholesome characters in American Horror Story, so much so that Ryan Murphy brought her back from the dead in Apocalypse. However, two episodes wasn’t enough. If we do get Coven 2.0 eventually, then we’d need to see Rabe on board as her most iconic character. If not, she also has a knack for playing troubled psychopaths (Aileen Wuornos and Sister Mary Eunice), so we’d love to see her return in a villainous role like her sensational guest-stint in 1984. But we’ll take anything we can get.

Can you believe Sarah Paulson has appeared in every single season of American Horror Story to date (bar 1984), and she hasn’t received one Emmy Award for her efforts? The American actress has received widespread praise throughout her time on the horror anthology, portraying a total of 11 iconic and varied characters, including psychic Billie Dean Howard in Murder House, head witch Cordelia Goode in Coven, and even conjoined twins Bette and Dot in Freak Show. We’ll admit, 1984 has been incredible but without Sarah Paulson, it feels like a completely different show.

Heroes star Zachary Quinto made an appearance on the show’s first season as Chad Warwick, the partner of Patrick. They were both murdered by The Rubber Man so new residents could take over and provide them with the spawn of Satan (what a sentence eh?). Quinto returned in Asylum for a much larger role, where he played a psychiatrist at Briarcliff who ultimately turned out to be the masked murderer, Bloody Face. It’s been six years, so surely a comeback is imminent?