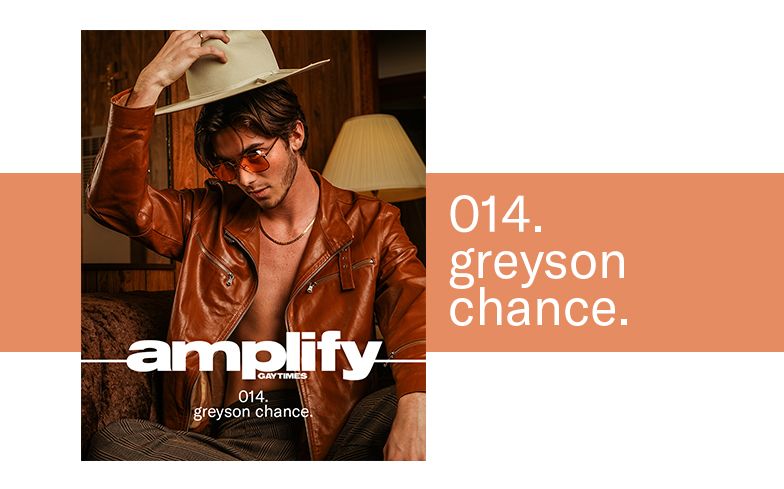 Nine years ago, Greyson Chance became a viral sensation after his sixth-grade performance of Lady Gaga’s 2009 pop anthem, Paparazzi, was uploaded to YouTube.

After receiving widespread attention, heaps of acclaim (and a phone call from Gaga), the singer-songwriter – who was just 12-years-old at the time – was invited to appear on The Ellen Degeneres Show, and subsequently became a household name in the United States. In the same year, Greyson released his first single Waiting Outside the Lines – produced by Christina Aguilera’s mentor, Ron Fair – which was shortly followed by his pop-rock influenced debut studio album, Hold On ’til the Night. Imagine doing all of that before you hit your teens?

“I had to go through the ringers of the music industry at a very young age,” says Greyson. “I am just so blessed for my parents. I have an amazing mom and dad and they supported me through it the entire time, but there were a lot of pros and cons to it.” In subsequent years, Greyson released multiple EPs and a number of standalone singles – including Meridians, Back on the Wall and Lighthouse – but later decided that he wasn’t cut out for the industry. “I didn’t really see a path or trajectory for myself moving forward in music. Throughout adolescence, I knew I was good at music, but I don’t think I understood the weight of this being my path, my purpose. I became so beat down in the industry and so many people closed the door on me and said, ‘Listen, you’ve had your moment, that’s it.'”

He instead chose to pursue a degree in history at the University of Tulsa. During his time there, Greyson lost his passion for music, but his fanbase didn’t leave with him (he has over 600,000 followers on Instagram and two million monthly listeners on Spotify). One day, Greyson received a life-changing message from a fan who lived in Arkansas, not too far from his home state of Oklahoma. In the message, the fan detailed his difficulties with coming out to his family and friends, and also praised the star, telling him: “Hey, I know you are not gay, but I just wanted to let you know that your music really inspires me.”

Although Greyson came out to his family and friends at the age of 16, he wasn’t out to the world at the time because he didn’t have the self-confidence, and didn’t want his sexuality to be an “exploitation tactic” for commercial success. But this particular message, he says, was a “huge wake-up moment” for him to come out publicly. “It was just one of those times where you splash water on your face, look in the mirror like, ‘Come on, have the courage to do this.'” Before Greyson boarded a flight, he drafted several versions of his Instagram coming out post and ultimately settled for a picture of a rainbow flag. “I tried to pick the least dramatic way that I could do it, staying away from self-exploitation,” he reminisces. “I didn’t want to post a photo of myself or anything. I just was like ‘What can I pick?’ So I just took that image and wrote down a few paragraphs, and I posted it very quickly.” The post went viral, ultimately receiving over 140,000 likes and thousands of encouraging comments from fans. Greyson also had a positive experience coming out to his family, despite hailing from the conservative state of Texas. “The way they had to act surprised was funny to me,” he recalls. “I remember being jumbled up on my bed, shaking, almost on the verge of tears thinking, ‘They are going to be fine… but what if they’re not?’ I then came out to them and I remember there being a pause, both of them nodding their head, looking at each other saying, ‘Ooh! Wow, we are so surprised!’” He adds: “And if there were any speed-bumps in the process, I think they were just transitional, as in getting used to saying ‘When are you going to bring a boy home?’ instead of ‘When are you going to bring a girl home?’ But if someone comes for me, my family is always going to be the first ones to stick up for me, and I am very lucky for that.”

Unlike other queer artists such as Ricky Martin, Olly Alexander and Ezra Miller, who were advised not to come for the sake of ‘having a career’, Greyson was approached by a music industry executive who urged him to come out in an attempt to drive record sales. “He looked at me across the table and said, ‘When are you planning on coming out as gay? I recommend you do a video message. If we time a release around that it will be great promo for you and it would be great for your numbers.'”

Understandably, Greyson was “alarmed and terrified” by this because he was still coming to terms with his identity, and wasn’t ready to reveal so much of himself to the world. “I remember being like, ‘First off, I haven’t even told you I’m gay, and second… no.’ I was taken aback. I think in the same way there was this ‘don’t come out culture’ back in the day – which I think is still prevalent – there is now a culture of, ‘Oh, you’re gay, fantastic, how can we exploit that? How can we use that as your thing and your defining characteristic?'”

Since coming out, Greyson has focused his efforts on using his platform to raise awareness for LGBTQ rights in Oklahoma. Although queer people enjoy most of the basic rights available to cishet citizens, the state does not have any protections in place for those who are discriminated against in the workplace for their sexual orientation. “There is still a lot missing from the narrative in terms of the problems we are facing,” he passionately states, before highlighting the lack of concern for members of the LGBTQ community who aren’t white, cisgender men. “If you are a white, gay man, your life is likely going to be very okay. But if you’re a person of colour, and if you’re a trans youth, the likelihood of you getting murdered on the streets is really high. And we had to deal with that a lot in Tulsa when I lived there, we had two murders in a year of trans youth. I think my biggest focus as an advocate and a person is to get out of the ingrained way of saying, ‘Well it’s really good in the city centre, so that means it’s good everywhere.'”

Last year, 26 trans individuals were killed in the United States – a majority of which were black and latina – and 25 of those were women. Greyson says he aims to bring attention to minorities within the community and to ignite a conversation about race, saying we need to “reach out to rogue communities” and talk to disadvantaged queer people in areas where their identity isn’t accepted. “We can’t have LA and New York as the guiding lines. We need to solve this from the ground up.”

After studying at the University of Tulsa for two years, Greyson made the decision to leave when he rediscovered his passion for music. And earlier this year, he returned to the industry with his second studio album Portraits, which received overwhelmingly positive reviews in comparison to his debut effort (he didn’t have much control over Hold On ‘til the Night). It was fronted by the synthpop, soft-rock tinged track Shut Up, the video of which showcases an interracial, lesbian couple – a far cry from his days of Little London Girl and Unfriend You.

“When I decided to leave school, I just let the music guide me and I was like, ‘Okay, this might be what you’re meant to be here for and you should pursue it, follow it a bit deeper,'” he tells us. “The first time I was really thrust on stage, and this time around it feels much more of a choice. I think it took a long time, just because I was trying to figure out who the fuck I was.”

On the album, Greyson recounts his personal experiences with past relationships and, unlike other openly-queer artists, uses gender specific pronouns in his songs. On Black on Black, the 21-year-old sings: “Let’s stay here for a while, you’ll snap some Polaroids ’cause boy that’s your style, you’ll tell me that you want to see little more, we end up back down on the floor.” And on Seasons Nineteen, he reminisces on a heartbreak: “Thought it was the end, I wish he would love me in the way that I loved him.”

Despite growing up with a love for Elton John, Greyson says he lacked an openly-queer singer-songwriter who “wasn’t necessarily outlandish” to look up to. “There was no one who was just, ‘Hey I’m gay and I’m here.’ And I think where I’m from, in the Midwest and the South, for kids growing up, it might have been really helpful to see that.”

Now he’s ready to be the gay pop star he didn’t see in the mainstream, and he’s doing it on his own terms. Greyson leaves the interview on a defiant statement: “I hope no one is sick of me, because I’m not going anywhere anytime soon.” We hope not, because we need him in pop right now.