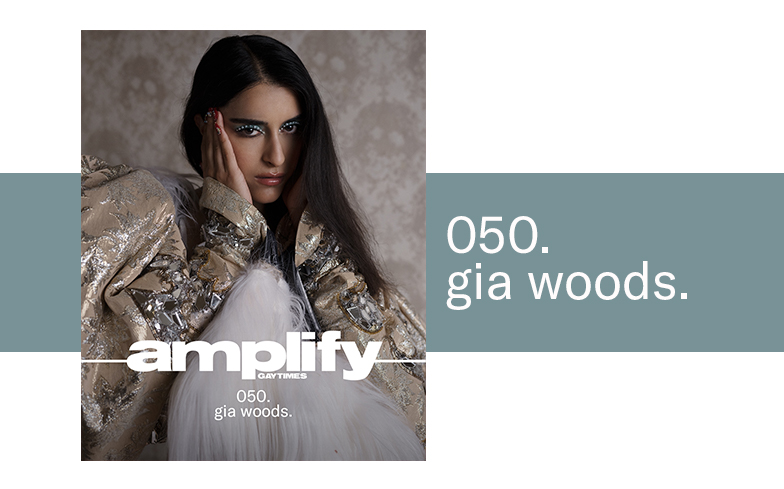 When singer-songwriter Gia Woods released her debut single Only A Girl back in 2015, it wasn’t just a big moment because it kick-started her career in the music industry; it also represented her coming out moment.

“Soft touch, warm skin, nothing like my ex-man,” she teases at the beginning of the track, which was written about her first same-sex relationship, before launching into a chorus that leaves no room for misinterpretation. “Only a girl knows how a girl feels, only a girl can make me feel this way,” she proclaims. The music video (which has accumulated over 10 million views) is equally clear, presenting a hazy paradise of queer females unbothered by men. For an 18-year-old Gia’s family and friends – and even her manager – the song was the first time they saw her as a lesbian.

“I was so closeted for so long with my friends and family, I was even in a relationship that I didn’t tell anybody about in high school, and so I think with my music it was really important to me to be honest from the start,” she explains. Her own life experiences and upbringing made her even more determined to reach people going through struggles with self-acceptance like she did. “I want to be able to connect to people who are in similar situations growing up, because I’m from a non-traditional family, I grew up in a very Persian, old-fashioned household. It’s important for me to put it out there because it’s truly who I am and truly how I feel.”

While the industry is now brimming with out-and-proud artists like Halsey, Janelle Monáe and Hayley Kiyoko providing authentic and unapologetic stories for young queer women to look up to, there was little representation for Gia growing up. “When I put out Only A Girl, there weren’t that many records that were open about sexuality at all – for me there wasn’t at least.” The only thing she could find to relate to was Katy Perry’s controversial 2008 single I Kissed A Girl, and even that was clutching at straws; it might have lit a fire in adolescent queers around the world at the time, but in retrospect it’s hard to deny that it was intended primarily for consumption by a straight male audience, as Katy declares “it felt so wrong, it felt so right” and hopes her boyfriend doesn’t mind. It’s a far cry from the genuine queer love stories pumping into our headphones in 2020.

“That song was as close as it got for me, but also from watching her I didn’t know whether that was…” she pauses for a moment as she tries to find the right word. Authentic? “Yeah, exactly, and I think a lot of people didn’t know. So I definitely didn’t feel a connection there. 90% of the time I was really closed off, especially during middle school and high school, and I feel like I would have been so much more open if I had someone to look up to and be like, ‘Oh, I’m actually not weird or alone’, or any of the things I was calling myself at the time. It would’ve changed a lot of things for me.”

Since releasing Only A Girl five years ago, Gia’s slowly been establishing her discography with a collection of made-for-radio bops that fit right at home alongside the biggest chart hits. New Girlfriend was a cheeky twist on a same-sex breakup anthem, bittersweet One Big Party sounded like the kind of song you’d belt out at karaoke (or with a hairbrush in your bedroom mirror), while Keep On Coming showed off Gia’s sultry side – if you think the title is brash, wait till you hear the lyrics. 2020 is looking even brighter, as January sees the arrival of new single HUNGRY, a grungy empowerment anthem about taking control and living for your own approval. “I’m in the driver’s seat, out here doing what I please, I’m the only one I need, and no I didn’t ask you what you think,” she declares on the track, before warning, “I’m not hungry, bitch, leave me alone.” It’s a song for anyone who’s ever been told to sit quietly, but feels especially relevant for women in a #MeToo world.

“Every time I’m in the studio or writing, I’m always experimenting and trying different sounds and pulling in from my influences, so this is definitely a harder and more aggressive sound for me, and I think it’s an indication of the songs that are coming,” she teases. “This song is definitely showing how I’m taking control of the music and my life and what I believe in, and honestly just doing more of what I want. So I think that’s why I’ve headed towards this direction.”

The music video, too, demonstrates a shift towards a grungier vibe, as Gia smashes a glass bottle over a guy’s head in a strip club, and murders another unfortunate man with a baseball bat while wearing a cheerleaders outfit with her name emblazoned on it. If it sounds crazy, that’s because it is – and it’s the exact kind of over-the-top visuals queers love to see from our pop stars. “Honestly, I was just excited to showcase different aggressive sides of me. That’s what’s so cool about this video, there’s not really a storyline, it’s just me being me in different rooms around different people… and also killing someone,” she laughs. “That was a little intense. I don’t really know how we got there, but we got there. Like, I don’t actually know what the reason for that was. Anyone who watches it does not expect that. So don’t ask. It’s just me being crazy and I love it.”

Gia is part of a new wave of out-and-proud queer female artists who are making waves in the music industry – there’s far too many to list here, but names like King Princess, Girl In Red and Rina Sawayama come to mind. It’s a phenomenon that hasn’t gone unnoticed, and it feels like we’re making up for decades of straight-washing and silenced voices in an industry that has historically catered its female stars towards a straight male audience. “Every year since I’ve put out Only A Girl, I’ve definitely seen a growth and it’s gotten better, I’ve seen more artists come out,” Gia says. “I think as soon as people start doing it, other people feel more confident to be more open too. It’s not a trend – it’s a gradual thing, one after the other.”

There are still some artists who keep their sexuality hidden or remain ambiguous in their lyrics. Gia agrees that it’s an individual choice to open up, but believes it “would definitely help” if more people did so. “I think we need to normalise it,” she says. “We are our own community, but I also want it to be a universal world where we’re all inclusive and open and I think that’s where it will become more normal. You’re not special because you’re different. I don’t like that. It’s just what I like, in the same way someone might like the colour red or the colour black. That’s how it should be with sexuality, it shouldn’t be defined as a unique thing about you, it’s just who you are. But it’s also up to everybody to make that decision because you never know their back story or how they were raised or what their living situation is. It’s hard when you’re in the beginning stages of a career you’re still crafting.”

Her honesty has made Gia a role model for many in the LGBTQ community. Five years after its release, she still gets approached by fans at concerts or via social media who have been inspired to come out to family and friends after hearing her debut single Only A Girl. “It’s such a cool feeling to know that I can be a voice for these people. It’s insane. I went on my first tour over the last summer, and a lot of people at the shows were coming up to me and getting emotional and saying, ‘You helped me with this and you are the reason why I feel comfortable with who I am’, and that is just such an insane feeling to know that I’ve done that. I’m so thankful and proud.”

She does, however, want to be known as more than just a queer artist. “I’ve always been so proud of who I am and I’m so proud to be part of this community – and I always want to be part of it – but I definitely don’t want it to be the only thing that defines who I am. It’s one of the biggest things that shapes who I am, but I don’t want it to be like, ‘That’s the reason she’s making music’. I’m making music to connect with people, definitely people from the LGBTQ community because a lot of my music is about my relationships, but I don’t want it to be defined by that. I want people to get to know me and my upbringing and how I’ve become who I am – not just who I’m sleeping with, you know?”

2020 is already shaping up to be a big year for Gia. As well as excellent new single HUNGRY, she’s planning on touring again and is currently working on her first EP, which is due out soon. Unlike the steady trickle of singles she’s released over the last few years, Gia wants this EP to tell a complete story. “I think it’s important for artists to be fully open and honest with who they are, and it’s hard to get to know them through just singles,” she says. “Projects are so much more interesting, in my opinion, so that’s what I want. With this new EP, I’ve been so delicate and I’m working on it every single day to make it as perfect as I can. I’m really excited. Making something you’re proud of and having people join your world, that’s happiness to me. That’s all I care about and what I wanna keep doing.”

Whether it’s her lyrics (”I like your new girlfriend more than you,” she teases on New Girlfriend) or her music videos (recent release Feel It sees her passionately make out with another woman), she’s the future pop superstar – and the visible lesbian representation – the world needs. Gia has the whole package; the visuals, the tunes, the voice. This is her year.