Look back – or forward! – to one of the world’s most authentic LGBTQ celebrations, Chicago Pride 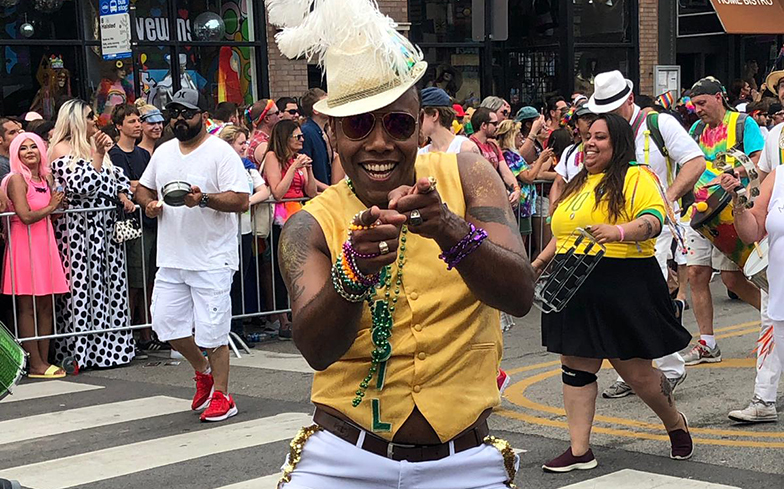 Chicago Pride is the last of the ‘genuine’ Prides.

It’s not commercialised to within an inch of its Andrew Christian’s, some folks apparently still don’t own a full-length mirror and, this year, Lori Lightfoot, the first openly gay mayor of the city, was grand marshal.

Here’s the LGBTQ-down on what gives Chicago Pride that genuine feeling of celebration.

Culture in EVANSTON and OAK PARK

Evanston, north of the city, has second-hand bookstores and funky eateries classier than most university towns. Hotel Orrington might just have the largest damned walk-in closet ever but you can walk right out to the Five & Dime Restaurant where the roof is on high. In the morning, slide your luggage to the Farmhouse Restaurant, attached to the Orrington and bulging with big breakfasts. You must get to Oak Park for the Frank Lloyd Wright tour (see the home you wish you lived in) and Wright’s quite remarkable Unity Temple. Catch a groovy local brunch at the Little Gem where it’s not just lettuce. Trust us.

Previously a grand insurance building, the Kimpton Gray Hotel features rooms with a glorious view of the city’s downtown architecture. If you want to impress – your other half, your new friend(s), or just yourself – opt for the Peninsula Hotel, where the spa and the rooms are of the super luxe-y kind. Bring your best stretch-top slacks for pizza at Gino’s East (beware: if you’ve been fasting, you will only manage one slice). Head over for cocktails at the 360 Chicago Observatory or Offshore, the nation’s largest rooftop venue – both are swanky in an LSD kind of way. (LSD = Lake Shore Drive. See? Just like a local.) Famous drag spot Kit Kat Supper Club in Boystown has live acts (when we were there, it was one performer with different wigs) – all bolshy and fun.

Get thee to Grant Park’s small but perfectly formed – and fit-to-bursting – Pridefest. Having started in 1970, Chicago Pride this year had 160 participants with a route running from Montrose to Diversey. For ease, pre-book for pre-loading at the very friendly Drew’s on Halsted where mimosas rule and you get an automatic view of the parade. And remember to stay on the same side of the parade as your public transport because, like love, crossing the route ain’t easy. You can’t drink alcohol on the street and you mustn’t get caught as there is a $1000 fine. Expect a million people in a city of three million. You must be able to find a date in there somewhere.

There’s got to be a morning after, and that’s the best time to go on the Shoreline Architecture Cruise. This is Chicago’s version of seeing Venice from the water. This is the perfect way to get your cultural fix of this architectural city without having to walk anywhere. You’ll learn all you need to know about the history of this great city in one not-too-long scenic cruise. There is a bar onboard. Bring a hat.

GETTING THERE: United’s Polaris Business Class has 23” seats, lots of legroom, cold champagne (Lanson!) plus a fantastic selection of in-seat entertainment.

Zendaya makes history with first ever Emmy win for Euphoria