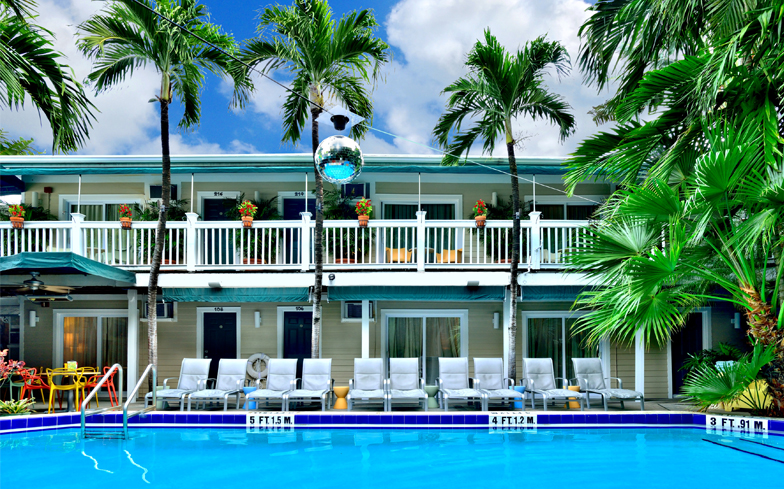 Just four hours drive from Miami (and it’s one of the most famous drives in all of the Americas) is Key West, a strange and lovely tropical island city less than a hundred miles from forbidden Cuba.

And in among the grand Edwardian houses and palm trees in the Old Town is the spot often called ‘the best gay resort in the world’, probably, almost definitely the first ever men-only resort anywhere.

Based around a central pool, the idea of Island House Resort is that you can get stuck into the ‘steamy’ goings-on or just laze around on the sidelines grazing on international goodies from the 24-hour poolside café and bar while it all goes on around you.

The rooms are bright and reasonably priced and some look out over historic Fleming Street and with almost as many staff as there are rooms, you’re pretty well looked after.

As far as Key West goes, it’s a very old-school affair with an LGBTQ scene that is still extremely weighted towards the G side of things with the go-go boys of Bourbon Street Pub – a massive gay complex with a pool and everything – often coming out onto the streets in just a bandana around their thighs to protect their modesty to drum up interest.

The so-called Pink Triangle is on and around the 700s block of Duval Street with a healthy amount of venues like Aqua Nightclub, Side Bar, Back Bar, Saloon 1, Bobby’s Bar… mostly friendly and funky and low-key. If you’re looking for something a little more upscale try La Te Da, a traditional Edwardian house with a poolside restaurant, cabaret rooms and legendary Sunday tea dance.

It may not have the great beaches you might expect from a Florida resort but there’s plenty of fun to be had on the water whether it’s a sunset wine-tasting cruise on a yacht, a clothing-optional cruise which can get pretty raunchy or your regular water sports like snorkelling (which is great around here), jet-skiing and paragliding. And there’s the Ernest Hemingway House for your culture fix (watch out for the famous six-toed kitty cats that are everywhere) and a cute little theatre. Actually, there’s live music pretty much everywhere you go.

Key West is a famously LGBTQ-friendly little town with its own Pride in June and a Bear Weekend in November and fairly reachable from Miami, if you want a break from the glitz of South Beach. And Island House Resort certainly takes its gay-friendliness to the max. If you know what we mean.