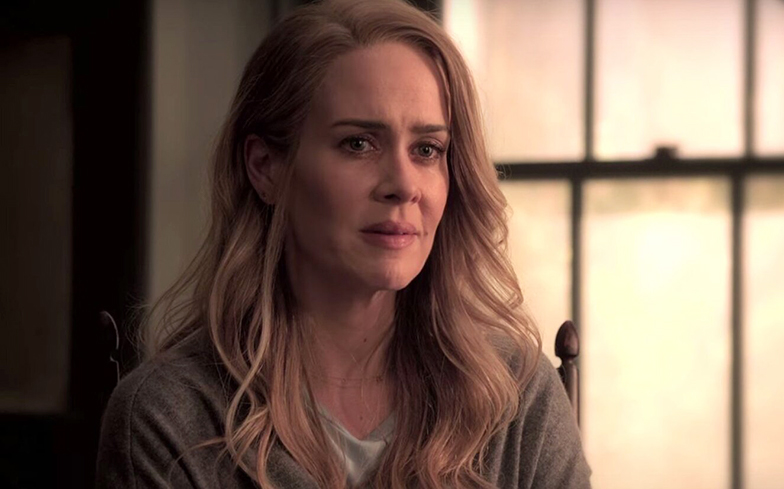 In the season finale of American Horror Stories, viewers were brought back to the infamous Murder House under meta-themed circumstancs.

The episode, titled Game Over, follows Connie and Adam, two AHS super fans who book a weekend stay at the terrifying haunted house.

Over the course of the episode, the two make references to the nine seasons of the series as their stay in the house quickly changes from wholesome to murderous.

At one point, Adam suggests to Connie that they leave the terrifying home to binge-watch one of the most polarizing AHS instalments, Roanoke.

“Why did Sarah Paulson shit talk that season? It’s so good,” Adam exclaimed.

Of course, it doesn’t end well for self-professed fans as the murderous ghost inhabitants gruesomely end their lives.

AHS: Roanoke first premiered back in 2016.

The sixth season revisited the slower and subdued pace of the show’s earlier seasons, and was presented as a paranormal documentary series titled My Roanoke Nightmare.

It tells the story of a married couple (played by Sarah and Cuba Gooding Jr.) who experience spooky disturbances in their North Californian home. The second half depicted the production of the documentary’s sequel.

Upon its release, the series received mixed reviews from fans but was met with praise from critics.

Back in June, Paulson revealed that she was “underwhelmed” with the season during an interview with the Hollywood Reporter’s Awards Chatter podcast.

“I just don’t care about this season at all,” she admitted. “I know people will get mad at me for saying it, but for me, this was post having played Marcia [Clark in American Crime Story: The People v. O.J. Simpson] and it was what I went to do right after finishing Marcia.”

Paulson went on to say that after her experience on ACS, she “felt trapped” when she went back to the AHS universe.

“I felt really kind of trapped by my responsibility and my contractual obligation to do American Horror Story. As much as it’s my home and I’ve loved it always, it was the first time I felt like I wish I could have gone to Ryan and said, ‘Please let me sit this one out. You know, let me out.’”

Paulson said she was happy to return for the following season, Cult, which explored the aftermath of Donald Trump’s presidential election and the rise of a cult headed by Kai Anderson, a deranged, blue-haired lunatic portrayed by Evan Peters.

“But Roanoke, I kinda went kicking and screaming,” she added. “I’m gonna get a call from Ryan like, ‘Why are you saying that?’”

With season one of American Horror Stories officially complete, AHS fans wont have to wait long for more terrifying content.

Paulson and Peters are expected to make their highly-anticipated return to the franchise after sitting out AHS: 1984.

Check out the full trailer below.