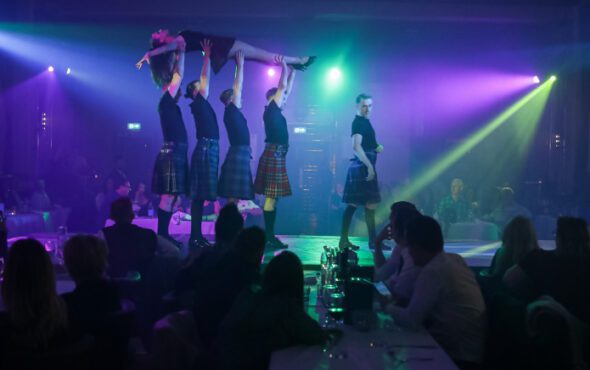 In the setting of the grand Victoria House – a listed 1920s Art Deco building in the heart of central London, on the corner of Bloomsbury Square – the London Cabaret Club is quite an experience.  The attentive staff take care of your entire evening: there’s some pre-show entertainment in the bar area, followed by the main show itself – which lasts a couple of hours – and then there’s an after party with a DJ set for those who wish to stay into the night.

There are a variety of options at differing price points. A ‘silver’ ticket, available from £50 per person, allows access to the club and show; for our review we were given the ‘gold’ ticket experience, which is advertised as being available from £90. This included a three-course meal which, while tasty and nicely presented, was not all that substantial. Two further options are available: ‘diamond’ from £125 which includes an upgraded meal, canapés on arrival and a themed cocktail; and ‘royal diamond’, from £165, which additionally throws in a fourth course for the meal and half a bottle of champagne.

The show itself is strong – there’s a wealth of talent on display here, and a fair amount of variety. We’ve seen a lot of cabaret and circus shows in London over the years and while none of what we saw here was particularly daring or boundary-pushing, it was also slick, polished and occasionally very impressive. There’s enough variety to hold the audience’s interest throughout, whether that’s through the use of a Cyr wheel or an aerialist display, alongside all the expected singing and choreography.

The performance is in three acts – with the food service taking place between each segment – and moves progressively through the decades. Initially we listen to music by acts like The Beatles, The Kinks and The Rolling Stones; then moving on to the likes of Queen, David Bowie, on to Wham! then The Spice Girls, and finally more recent acts such as Amy Winehouse and Mark Ronson. It’s an enjoyable whistle-stop tour of many of our biggest musical exports over the decades.

While watching the Best of British Pop experience we were debating who the ideal target demographic for this particular show might be. We think it would work well as a treat for a special occasion, or for those visiting London and wanting a ‘British’ experience all in one night. It may not have been the most exciting cabaret we’ve seen, or the finest meal we’ve eaten, but the quality of the offering was consistently good. It’s an enjoyable all-round package and the whole evening is taken care of – it will certainly tick a lot of boxes for many customers.